“While Corona’s removal from the SC will, to some extent, help in the prosecution of Arroyo, the people should be reminded that it is still the Executive branch which has the ultimate responsibility in ensuring that GMA is held accountable.” – Bayan

MANILA – As the prosecution was presenting Article 7 of the impeachment complaint, exactly on the day that former president Gloria Macapag Arroyo was arraigned at the Pasay City Regional Trial Court, different caused-oriented groups under Gloria Panagutin! Movement trooped to the Senate on Thursday, Feb 23 calling for the conviction of Supreme Court Chief Justice Renato Corona.

According to Article 7, “Corona has betrayed the public trust through his partiality in granting a temporary restraining order (TRO) in favor of former president Gloria Macapagal Arroyo and her husband Mike Arroyo in order to give them opportunity to escape prosecution and to frustrate the ends of justice, and in distorting the Supreme Court decision on the effectivity of the TRO in view of a clear failure to comply with the conditions of the Supreme Court’s won TRO.”

“Corona is liable for hastening the Supreme Court issuance of the TRO, for changing the results of the SC deliberations on the conditionality of the TRO and in ensuring that the TRO would be immediately enforced through irregular means, including the extension of office hours,” Bayan secretary-general Renato Reyes said. 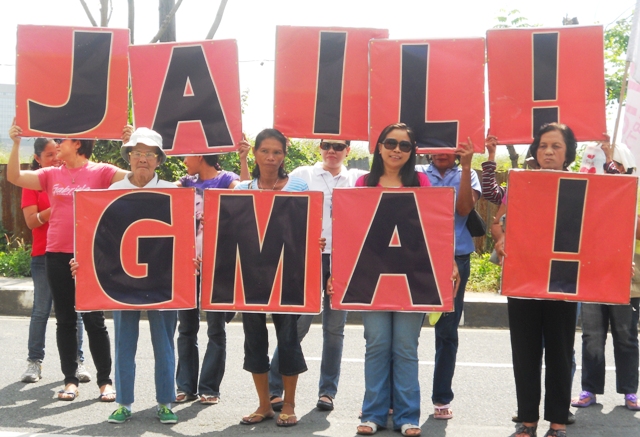 It will be remembered that on Nov. 15 of last year, the SC issued a TRO against the Department of Justice’s (DOJ) watchlist order and thus permitting Arroyo to leave the country for her medical treatment abroad. According to the manifestation of Bayan Muna Rep. Neri Colmenares, in the Nov. 15, 2011 SC decision, the TRO would only take effect after the Arroyos have complied with the conditions. However, Corona promulgated the TRO even though two of the three conditions had not yet been complied with by the Arroyos.

These conditions include the payment of a P2 million ($46,783) bond and submission of a special power of attorney. “The unilateral change and distortion of the decision of the Court is one of the gravest acts of partiality of CJ Corona to favor his former boss, and appointing authority, Gloria Arroyo,” Colmenares said in his manifestation.

Reyes, on the other hand, said Corona cannot hide behind the mantle of collegiality since documents from the SC revealed his individual role and partiality in the granting of the TRO. “The TRO fiasco showed us how Arroyo intended to use the SC as her last line of defense to evade accountability. We saw how the SC was all too willing to accommodate Arroyo’s demands.”

The Gloria Panagutin! meanwhile expressed alarm that the recent turn of events undermines efforts to make Arroyo accountable for her many crimes against the Filipino people during her term as president.

“Recent developments in Senate trial and in the SC are truly disturbing. What we have witnessed in the past few days is the systematic suppression of key pieces of evidence that could help shed light on the transgressions committed by the Chief Justice,” Fr. Joe Dizon, spokesman of Gloria Panagutin! said.

The group cited the decision of the Senate to reject certain witnesses offered by the prosecution panel to substantiate the allegations contained in Articles 3 and 7. 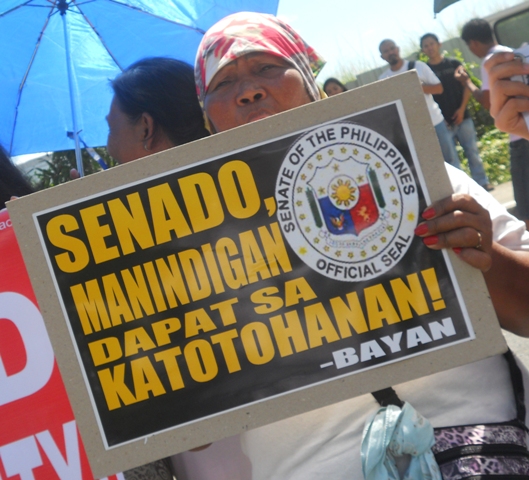 In Article 3, Corona committed culpable violations of the Constitution and betrayed the public trust by failing to meet and observe the stringent standards under Article 8, Section 7 (3) of the constitution that provides that “A member of the judiciary must be a person of proven competence, integrity, probity, and independence” in allowing the Supreme Court to act on mere letters filed by a counsel which caused the issuance of flip-flopping decisions in final and executory cases; in creating an excessive entanglement with Mrs. Arroyo through her appointment of his wife to office; and in discussing with litigants regarding cases pending before the Supreme Court.

The Gloria Panagutin! also cited the current SC decision imposing a TRO on the presentation as evidence of the dollar accounts of Corona, as well as its refusal to provide vital documents and allow its Justices and staff to testify before the impeachment court.

Last Feb. 9, the SC issued a TRO against the opening of dollar accounts of Corona in the impeachment court. Corona has five foreign currency accounts in the PS Bank but the TRO prevented the impeachment court from examining the latter’s account – Dizon challenged the Senate impeachment court to stand up for the truth, justice and accountability and do not simply accept the decision of what the group call the Corona-led SC.

“They (senators) could not escape scrutiny by the Filipino people who have long been yearning for justice and accountability from the country’s highest officials. The trial is not only about removing Corona from the SC. More importantly, it’s about making Arroyo liable for her many crimes,” Dizon pointed out.

Bayan condemned the SC Feb. 14 resolution which seeks to suppress evidence by declaring certain documents as confidential and by preventing court officials from testifying before the Senate.