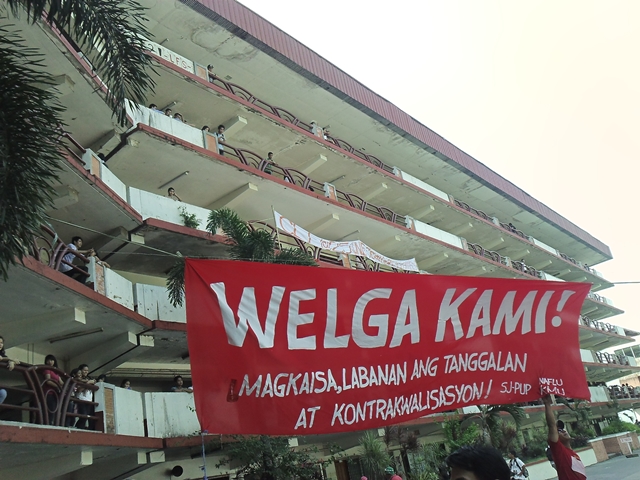 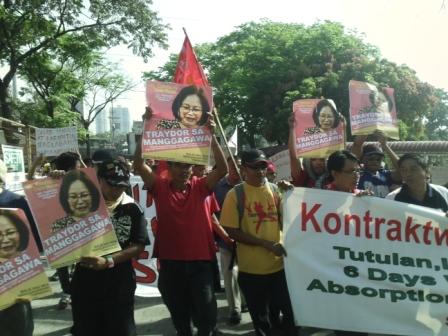 MANILA – With supporters from the community surrounding the Polytechnic University of the Philippines (PUP) and some fellow workers, more than a hundred contractual janitors of PUP go on strike today to demand their reinstatement. They also asked the university administration to make good on their promises and previous agreement.

The workers, many of whom have worked for the university for decades but were directly employed by a contractor, were laid off from work following the entry of employment agency Carebest into the campus.

Last Feb. 16, the workers held a protest action against their retrenchment. They were met in a dialogue by PUP OIC Estelita dela Rosa who signed a memorandum of agreement with them stating that the workers would be absorbed by Carebest after they submitted a set of requirements in two weeks.

After a few days, however, dela Rosa refused to recognize the MOA.

“Many of us have been working for the university for decades. We should have been recognized as regulars by now but instead we were booted out from work. We’re treated like rags, thrown into the trashcan after being used,” said Rey Cogomoc, SJPUP president.

“We are fighting for our reinstatement. We have fought hard before to receive the minimum wage mandated by law and to be reinstated and we have won in both cases. We are determined to fight until we are reinstated,” he declared.

The plight of the PUP janitors reflects the situation of contractuals in the country, said the KMU, of which the SJPUP-National Federation of Labor Unions is an affiliate.

“Contractual workers will not be forever silent about their retrenchment from work or from the violation of their basic rights as workers. As the PUP workers have shown, contractuals are fighting back for their rights,” said Elmer “Bong” Labog, chairman of KMU.

“The Filipino workers and people are angry with contractualization. We will continue supporting the contractuals’ struggle against retrenchment, for reinstatement, and for regularization,” he added.

The KMU called for the passage of House Bill 5110, otherwise known as the Regular Employment Bill, filed by Anakpawis Partylist Rep. Rafael Mariano. The bill seeks to ban the contracting out of labor in the country.

“We are calling on Filipino workers and people who are also angry at contractualization, to unite and fight for the scrapping of this most anti-labor of employment schemes,” Labog said.