Performing Alan Jazmines: a reflection on his prison poem

Last February 24, via Pitong Sundang: a dance repertoire by the Sinagbayan (a youth cultural organization based in the University of the Philippines) directed by artist-educator Roselle Pineda, I had the opportunity to perform, alongside fellow artists Edwin Quinsayas, Lorelei Bulan and Angeli Bayani, a significant and timely piece “Maliit at Malaking Piitan,” (Small and Big Prison), a poem by Alan Jazmines, a 64 year-old political prisoner.

In the performance, Angeli Bayani and I recited the poetry in an arrangement by the director, while Bulan and Quinsayas did creative movements inside and outside ‘small and big prisons’ at the center stage and at the back of lighted white panels. The center stage being the “small prison” and the panels being the “big prison.” Angeli and I were inside “small cells” defined by the play of light and small spaces.

It was a very emotional performance. We actually did a repeat of the piece during the launching of former political prisoner Angie Ipong’s second book, “A red rose for Andrea” last February 29.

But more than the performance, the poem itself is worth the attention more. It reminds us all that in this society, no one is really free. At least, not yet.

(It is still very different, at first glance,
the world out there,
with the world here inside. …)

That is the first three lines of the poem. I was immediately captivated by the lines because of its simplicity and directness. Yet, Jazmines, who is also a visual artist, made sure it does not lack metaphor, melody, rhythm and visual impact. 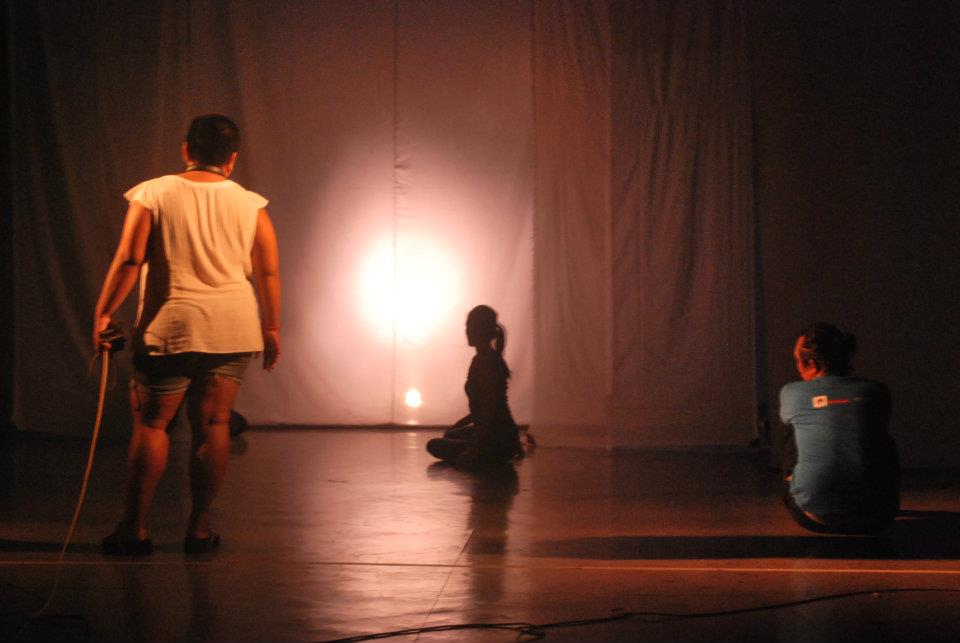 With director Roselle Pineda and dancer Lorelei Bulam during the blocking rehearsals..(Photo courtesy of Sinagbayan / bulatlat.com)

For someone who knows about the poet’s ordeal, these lines easily transported me to where the voice is coming from-inside prison. These lines evoke a lot of emotions, mostly coming from sadness, loneliness, or grief and even anger coming from the fact that yes, the poet is telling the world- I am imprisoned.

Angeli and I took different voices and characters. She represented the numbed, the prisoner who has been detained for so long that the beatings are no longer as painful as it used to be. I, on the other hand, portrayed a prisoner who had just been confined and the physical pain still fresh. Regardless of that though, our characters were both prisoners, both in solitary confinement. The two dancers/movers meanwhile, represented what was going on in our minds.

(it is so cramped, this few-square meters that we can go around in,
and the time is counted,
for every movement.
always you have to be seen,
and counted,
they must know everything we do,
always looking and searching
that we might be hiding something)

We were let in, inside the very corners, inside the very few-square meters he is confined in, with other prisoners. Abruptly one is compelled to either go there and share his ordeal or take him and the others out of there.

I remembered and imagined the many names of the wrongly imprisoned: Ericson Acosta, Maricon Montajes and the other more than 300 political prisoners spread out in small prisons in the country or the disappeared: Jonas Burgos, Sherlyn Cadapan, Karen Empeño and many more whose friends and families are until now looking and waiting for any information, any news from and about them (sadly, even bad news becomes welcome to the suffering parents, children, siblings, husbands and wives).

Simply because we are here outside, we worry less. We are not confined inside a prison cell or a military camp. We are enjoying our freedom. We are free. We are alive. Our families and friends know we are alive.

(It seems out there are wide spaces and you are free,
you still have control over your time
and you can go as far as you want,
say what you have to say,
and do what you have to do,
without being watched every second)

And yet, “seems” becomes the operative word. Here, one finally finds a different tone on the poet’s voice and is transported to another level. He does not seem to envy us, after all. In fact, he reminds us, with a hint of sarcasm, in case we forget, that:

(but if the small fascist here is not content
with how he manipulates
his small world here,
with his sacred fist,
outside,
there is a far worse big fascist
who is not content
in how he controls
the still, fluid, big world out there)

(more than the puppet small fascist here,
the big fascist out there needs to become bigger and bigger,
to grab more and more,
to control and control,
and multiply the keepers of peace and order,
and the number of prisoners inside the small prison,
because of your complaints- aplenty and often,
that crushes his world)

That yes, he may be inside a small prison cell but we are in a more dangerous state. Those of us who believe we are different from him who is locked up by the “peacekeepers” are compelled to think deeper and ponder. What with everything going on nowadays, it is not hard to realize indeed that we too, are imprisoned.

In the last two stanzas of the poem, Jazmines finally shouts and screams and effectively at that. Both Angeli and I were on our feet, agitated. Drowned with the intensity of the emotion that the poem asked from us.

(we need to complain and complain,
shake the foundations of the world’s prisons,
small and big.
Bring down the walls,
the iron grills,
barbed wires
that separate the big prison
and remove the fascists who act like kings,
in small and big prisons)

(otherwise,
with the continuing increase of
small prisons,
your world outside,
will become nothing
but a conglomeration
of small prisons)

Like every performer, I suppose, there was dissatisfaction on my part, at the end of our performances. I felt I wanted to play it some more, differently, more intense, more felt, or simply, better. But a couple of weeks after the “Pitong Sundang” show, I found myself reading the poem again. And I was right, it is indeed a timely piece of poetry.
We are indeed, (all of us, regardless of age, gender and class) prisoners of different prison cells. And yes, we are not yet free. And I am shouting, at the top of my lungs: “Free Allan Jazmines! Free Ericson Acosta! Free all Political Prisoners!”