MANILA — People’s organization nationwide has declared March 15, 2012 as a national day of protest to heed the government to put a stop to the unabated price hikes of petroleum products, and consequently other staple commodities. 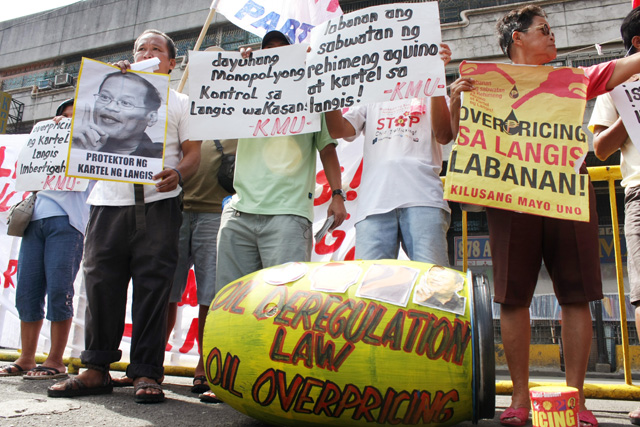 An insidious form of manipulation of oil prices
I have written a number of articles on how pump prices of oil are being kept high. Let me summarize the main reasons:

How can we stop oil companies from profiteering?
Oil companies increased pump prices again. This is the eighth oil price hike since the beginning of the year alone, amounting to a net increase of P6.75 ($0.16) per liter for gasoline and P6.50 ($0.15) for diesel. This would bring the prices of oil products in the country near its peak of P60 ($1.40) per liter in 2008 when the price per barrel of oil was at $147 and speculators were projecting (or wishing) that it would reach $200. (Click here to read the whole article)

The invisible hand of monopolies
The law of classical economics dictates that when demand exceeds supply, prices go up and dampens demand until it reaches equilibrium with the supply. On the other hand, when demand is low and supply exceeds it, prices would go down until demand increases and achieves equilibrium with supply. This is called the invisible hand of the market. This is the logic of neoclassical or neoliberal economics, thus, the push for limiting government intervention in the economy through deregulation, liberalization and privatization. (Click here to read the whole article)