You Are Here: Home → 2012 → March → 26 → Church official saddened over cancellation of dialogue with Aquino on human rights

“Somebody needs to speak about the human right situation — the disappearances, the detention of political prisoners, the tortures and the over all lack of legal security Filipinos face. This is a big challenge for the Philippines, and these need to be addressed.”

MANILA — The general secretary of the World Council of Churches Rev. Dr. Olav Fykse Tveit expressed disappointment over President Benigno Aquino III’s seeming lack of interest to discuss issues pertaining to the human rights situation in the Philippines. The WCC is the biggest protestant organization in the world, with a worldwide fellowship of 349 churches representing 560 million Christian members coming from various Christian traditions including the Lutheran, Methodist, Baptists, Reformed churches, Anglicans, Orthodox and Pentecostal Churches. It is considered to be on equal footing with the Roman Catholic religious authorities in the Vatican.

Tveit was in Manila from March 22 to 24 to attend the pre-assembly of the WCC Commission for World Mission and Evangelism (WCC-CWME), which began March 22 and continues until March 27. 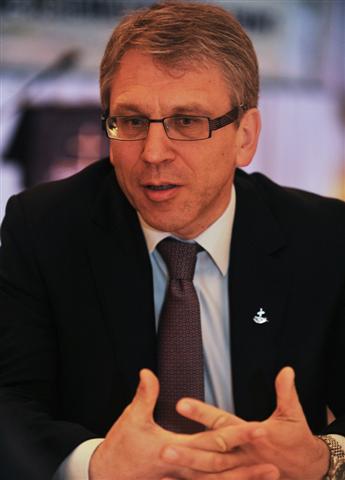 Tveit was scheduled to meet with Aquino in Malacañang around noon last Friday, but, according to the National Council of Churches of the Philippines (NCCP), which handled Tveit’s schedule, Malacañang suddenly cancelled the meeting when it was told that the church leader was interested in discussing the Philippine human rights situation. The NCCP and its member churches belong to the WCC fellowship.

An issue of legality and morality

In an interview with Bulatlat.com, Tveit said he could not help but be “disappointed because it would have been a tremendous opportunity for the president and us to talk about matters that are highly important to the Church and the Filipino people.

“There a lot of a people who need the attention of both the Church and the government. Somebody needs to speak about the human right situation — the disappearances, the detention of political prisoners, the tortures and the over all lack of legal security Filipinos face. This is a big challenge for the Philippines, and these need to be addressed. When the well-being of the people suffer, when their human rights are not cared for, then the Church’s fellowship also suffers. Anyone can be a victim of human rights violations,” Tveit said.

On March 23, Tveit met with leaders of the human rights organization Karapatan and some human rights victims. During the meeting in Quezon City, Karapatan gave a rundown on the current human rights situation in the Philippines.A number of victims of extrajudicial killings from 2001 to the present belong to member churches of the WCC.

“One case of human rights violations is one case too many. This situation has to be addressed by the legal system, by the political authorities in the country. What we all want is to build a fair society, where everyone can have legal protection. The authorities should listen to the people,” he said.

In the meantime, Tveit said that he was also personally interested in a dialogue with Aquino because they were the same age – 51.
“I was interested to hear about his views on what people our generation can still contribute to humanity. I wanted to hear his own reflections on this matter, about his thoughts on what we can do to make the world better,” he said.

According to Tveit, human rights are a very important issue to the WCC. “We are always concerned about issues concerning human rights. This is a very serious issue that any leader should be concerned with. How can any leadership be trusted if he won’t discuss these issues? This is a legal issue, but it is also a matter of morality. It is in the interest of everybody to address the issues of the people,”he said.

The protestant church official said had he been able to speak with Aquino, he would have also wanted to discuss with him other issues affecting the world like poverty, rising criminality, violence and worsening economic and political crises.

“Perhaps we could have reflected on how to to address the issues of the world and how the Church can support the work to bring about peace and justice. I would have wanted to learn from President Aquino what he thinks about these issues,” he said.

Tveit was elected WCC general secretary in August 2009 and began to hold office in January 2010. He previously served the WCC as a member of the Faith and Order Plenary Commission and as a co-chair of the Palestine-Israel Ecumenical Forum core group. He is an ordained pastor in the Church of Norway and served as a parish priest in Haram, More Diocese, as well as an army chaplain. In 2002, he was awarded a doctorate in theology by the Norwegian school of Theology/Menighetsfakultet in Oslo for his dissertation on Mutual Accountability as Ecumenical Attitude.

Rev. Fr. Rex Reyes Jr., General Secretary of the NCCP said the last minute cancellation was unfortunate. “Dr. Tveit is very much aware of issues in the Philippines and while he would have raised certain concerns, he would have also conveyed support to the resumption of the formal peace negotiations. We tried to seek this audience between the visiting leader and the President hinged on his campaign promises,” Reyes said. Dr. Tveit is a Norwegian and is aware of the role of the Royal Norwegian Government on the peace process.

“The WCC has always been our partner in the work for the defense of human rights in the Philippines. The WCC has not been ignorant of developments in the country when it comes to these matters. It’s too bad that Aquino missed the opportunity to give his views. It would have been his opportunity to explain what he intends to do with these concerns,” he said.

The church mission in a globalized world

Representatives of the Roman Catholic Church and representatives of independent Pentecostal and Evangelical churches and movements also attended the event. Manila Archbishop Luis Antonio Tagle represented the Vatican, which both he and Tveit said ,has very close ties with the WCC. The Roman Catholic Church is an observer at the WCC but holds full participating membership ion the Commissions on Mission and on Faith and Order. 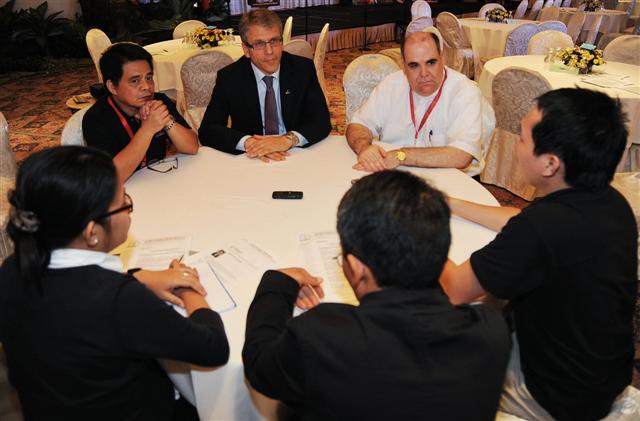 Rev. Reyes said the conference was the broadest and biggest international ecumenical gathering in the Philippines.

“The affirmation of mission is timely and critical. Much has changed in the world in the past three decades since the first Statement on Mission and Evangelism in 1961. In a globalized world, many problems have been globalized as well, such as economic crisis, displacement, plunder, poverty. And surely the world’s rich remains few while the poor had grown in bounds. In this context, with parallel similarities during Jesus’ time, the church mission would be for the poor. Only through this will the church’s role be truly prophetic.”

Reyes explained that the WCC pre-assembly sought to take a second look at mission and evangelism in the complex and difficult context. A draft on the same was prepared by the CWME and is hoped to be adopted by the assembly. The final assembly paper will be presented to the WCC General Committee before it is presented to the 10th General Assembly of the WCC to be held in Busan, South Korea in 2013.

One of the speakers, Dr. Roderick R. Hewitt, presented a paper titled “re-articulating Christian Mission and Evangelism.” In it, he issued a crticism against the impact of globalization.

“The impact of globalization on the wellbeing of people has resulted in war, political instability, hunger and climate change, especially for those in the South and has resulted in the mass migration of peoples that brought their faiths, languages and different Christian traditions into new cultural contexts. The pressing missiological challenge is how churches today celebrate differences while remaining faithful…The Christian mission must address, redefine and celebrate its integral mode of being in community. It must consistently affirm plurality which moves beyond simplistic dialogue to re-conceptualize mission and evangelism in the light of the challenge of religious and cultural plurality because mission and evangelism in Christ’s way is based upon a theology of generosity arising from our understanding of truth that is revealed in Christ,” he said.