Urban poor residents held a senakulo to protest against the “three crosses” they have been bearing namely, massive demolition of communities, oil price increases and power rate hikes.

“The daily survival stories of Filipinos trying to cope with high prices of oil and electricity, as well as the lack of decent, secure homes for their families could be likened to the passion of Christ and his crucifixion at Calvary,’ said Paulo Quiza, spokesperson of Bayan National Capital Region.

The annual “Kalbaryo ng Mamamayan” or People’s Calvary is a Lenten season protest action patterned after the senakulo, a traditional play depicting the life and passion of Jesus Christ. Progressive groups held this year’s Kalbarya at North Triangle in Quezon City on April 3, 2012, Holy Tuesday. Bayan National Capital Region and Sining Bugkos said, in a statement, that their protest is against the “three crosses” that are being shouldered by poor Filipino families namely, massive demolition of communities, oil price increases and power rate hikes.

The procession dramatized the sufferings of poor Filipinos under the administration of President Aquino, who was portrayed as Pontius Pilate, and his minions. 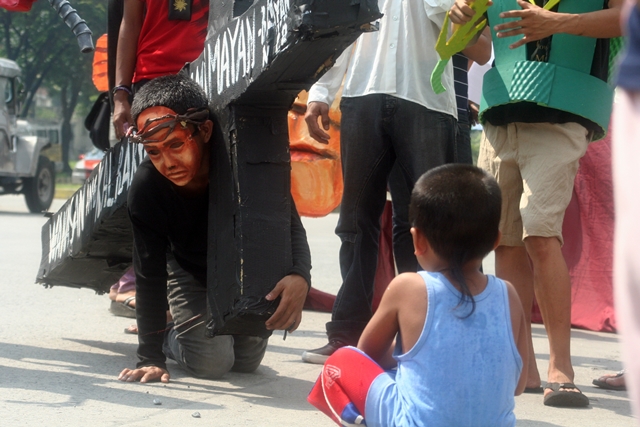 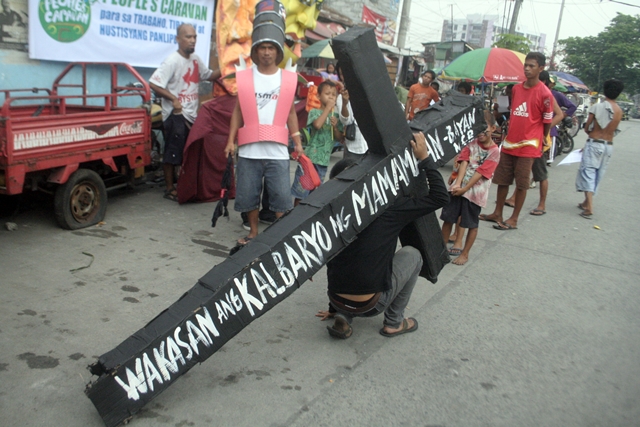 Quiza added, “The inaction and admission of Malacañang that the government could do nothing about the high prices of basic services and commodities, like oil and electricity, could be compared to Pontius Pilate’s washing of hands on the fate of Jesus Christ. For the longest time, President Aquino has been doing nothing but wash his hands on the sufferings of our people, in an attempt to evade his responsibility.”

Coping with the hard life

Estrellieta Bagasbas, national spokesperson of Alyansa Kontra Demolisyon, said their daily struggle is not just about the threats of demolition of their homes, but also about daily survival, especially with the increasing prices of almost everything. Bagasbas added that with the constant threat of demolition, she hardly has time to earn a living.

Bagasbas used to sew and sell rags, earning around $16.30 a week. She could no longer afford to earn a living with her busy schedule, which include attending meetings, dialogues, forums and protest actions. Jose Andres, her 14-year-old son, at times, fetch water for their neighbors so he could raise his allowance for the following day. If time permits, he also sews and sells rags.

“Before, $2.33 is enough for two meals. We would be able to buy a viand and charcoal. But now, it is hardly sufficient for a meal,” she told Bulatlat.com.

Whenever there are increases in power and water rates, Bagasbas said, families in urban poor communities are usually the most affected. Her family, for instance, do not have a direct connection for electricity and water. They tap these services from their neighbors who ask payment at a higher price.

“We have to scrimp on our expenses. Some of our appliances are no longer working because we are not using it anymore,” Bagasbas said. She said that she sometimes allows her 14-year-old son to watch television just to make sure that it is still working. 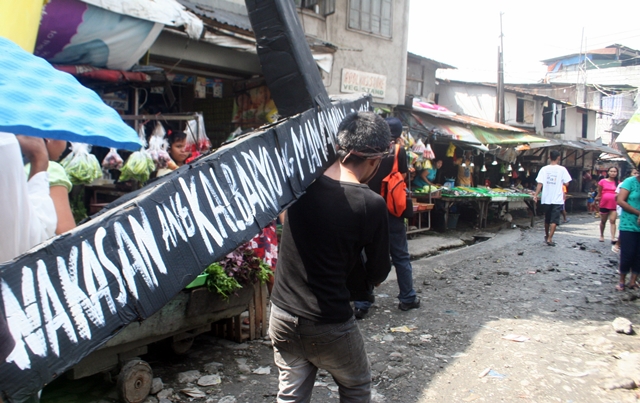 Even those who have regular salaries, according to Bagasbas, could not keep up with the increasing prices of basic goods and services. Those who do not have regular work but are trying to make a living by vending are being apprehended by local authorities. “Just last Wednesday, I saw a vendor apprehended by authorities. It seemed that he did not secure a village clearance to sell in the vicinity. They confiscated his goods and never returned it.”

On April 2, Kalipunan ng Damayang Mahihirap or Kadamay held a protest action in front of the main office of the Energy Regulatory Commission in Ortigas against what they see as a collusion between the Aquino administration and capitalists against the Filipino people. In their “Life and Passion of the Poor,” residents of urban poor communities criticized the recent approval of the increase of charges of the state-run National Power Corporation and the Lopez-owned electricity distributor corporation Meralco by the Energy Regulatory Commission.

Women from urban poor communities, wearing black veils, recited the miseries being suffered by the urban poor sector in less than two years of the Aquino administration.

Kadamay chair emeritus Carmen “Nanay Mameng” Deunida said the Aquino administration announced the power rate hike just when most consumers are heading into a holiday break. She added that it would be in vain because it would be faced by the people with “fury and disgust.”

“The oil companies and the power firms are the ‘modern-day centurions’ that bring nothing but Calvary to the Filipino people in the name of profit. Aquino, ergo, is the ‘modern-day Pontius Pilate’ who crucifies the people, especially the urban poor power consumers, to severe penury,” Deunida said. 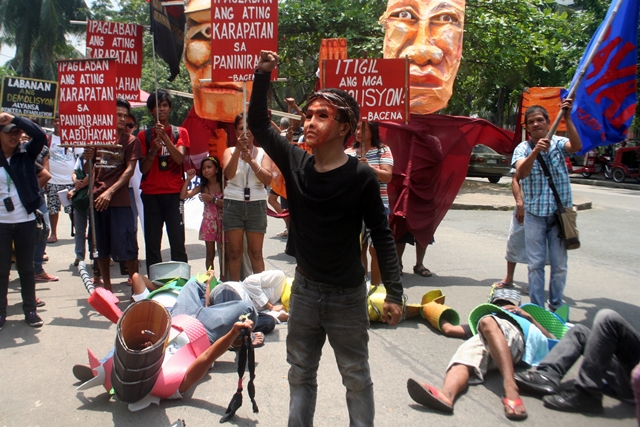 Several communities in the National Capital Region are bracing for possible demolition of homes after the Holy Week. Most communities have received their notice of eviction from their respective local governments last week.

“The continuous demolition threats during the Holy Week shows the brutality of the Aquino regime and its subservience to local and foreign capitalists who are interested in the lands occupied by informal settlers,” Carlito Badion, vice chair of Kadamay and convenor of Alyansa Kontra Demolisyon, said.

Among communities that are facing evictions after the Holy Week are the thousands of families residing in North and East Triangles in Quezon City and the 10-hectare land in Silverio Compound in Parañaque City.

The Task Force for the Control, Prevention and Removal of Illegal Structures and Squatting (TFCOPRISS), an agency under the office of Quezon City Mayor Herbert Bautista, has issued notices of demolition on March 28. The demolition of homes would supposedly give way to a road widening project along EDSA. The residents of North and East Triangles have up to the Holy Week to vacate their homes.

In Metro Manila alone, Demolition Watch, a non-government organization, has monitored around 20 urban poor communities, with no less than 16,000 families , facing demolition under the Aquino administration.

The Aquino administration does not seem to have a plan to help the Filipino people, especially the poor, unload the “crosses” that they are bearing on their shoulders, said Bayan-NCR, Sining Bugkos and Kadamay in a statement. The groups added that the policies of the Aquino administration that result in the worsening conditions of the people would be confronted by bigger protest actions.