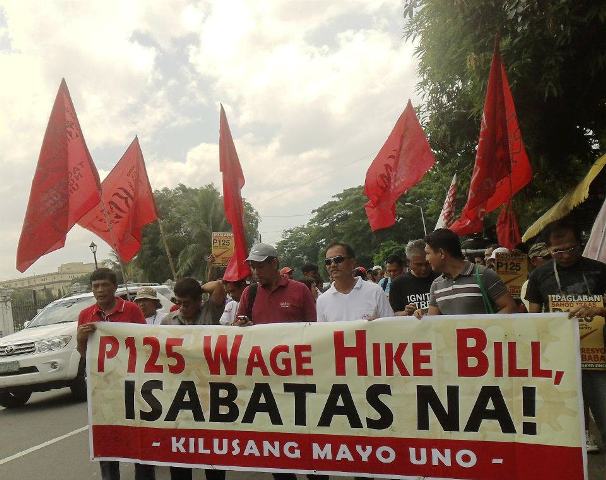 MANILA — Three weeks before Labor Day, workers led by labor center Kilusang Mayo Uno trooped to the office of the Labor Department in Intramuros, Manila to condemn the agency’s opposition to P125 across-the-board wage hike nationwide. The workers accused the Aquino government and the labor department of acting as “protectors of capitalists’ profits.” 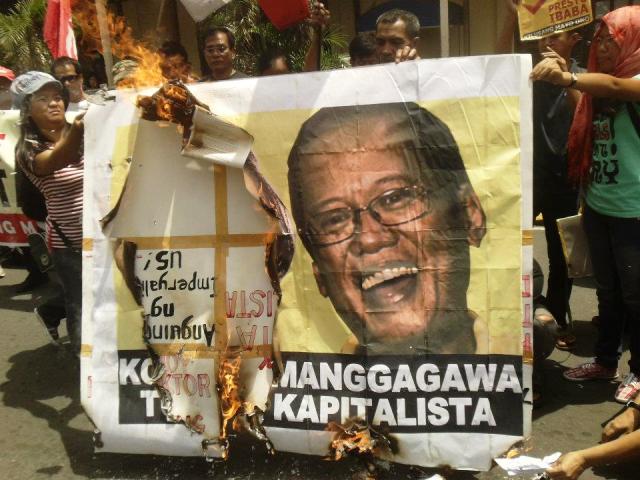 In front of the DOLE office, the workers burned big pictures of President Benigno “Noynoy” Aquino and Labor Secretary Rosalinda Baldoz, whom they tagged as “kontra-manggagawa, tuta ng kapitalista.

Baldoz rejected calls for the passage of House Bill 375 or the P125 Wage Hike Bill filed by Anakpawis Partylist Rep. Rafael V. Mariano, threatening the public against the wage hike’s projected inflationary impact, huge costs for capitalists, and the likely reduction in the country’s competitiveness compared to other countries.

But these excuses in blocking the P125 wage hike “are old, shopworn lies that serve the interests of capitalists at the expense of Filipino workers,” said Roger Soluta, KMU secretary-general. He explained that DOLE’s reuse of these lies is “another proof that the Aquino government, like its predecessors, is anti-worker and a protector of the profits of big capitalists.”

The DOLE’s claim about the wage hike heavily burdening the capitalists has been shot down by the independent think-tank Ibon Foundation which shows that the wage hike would amount to just a 12-percent reduction in capitalists’ profits. The research group said that it will not really be inflationary if firms will not pass on its prices the said small reduction in its profits.

The KMU scoffed at the attitude of the labor department and President Aquino, who they seem seem to find reducing capitalists’ profits even by a small portion unimaginable, “even if that’s what it takes to give workers and poor people genuine relief from the soaring prices of basic goods and services,” Soluta said as they burned pictures of Aquino and Baldoz. “These two just want to protect capitalists’ profits at all costs,” he added.

In a study of the UBS (formerly Union Bank of Switzerland) released in August 2011 called “A Global Purchasing Power Comparison,” out of the 73 cities surveyed, Manila has the third lowest purchasing power – next to Jakarta (lowest) and Mumbai (second lowest).

The group warned the labor department that they can compare the nominal wages in different countries all they want, “it will not stop the Filipino workers who are suffering hunger and poverty from continuing to demand a significant wage hike.” 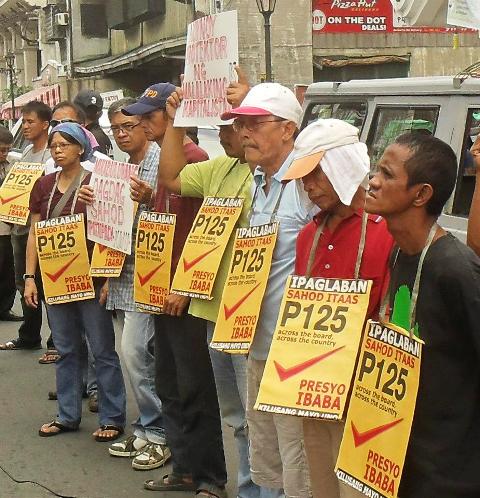