Although there is still a long way to go before the perpetrators are finally brought to the bar of justice, we hope that this initial success in Mutya’s struggle for justice would inspire other victims to also come out and pursue justice for the violence and abuse committed against them by military men and other persons in authority.” – Gabriela

MANILA — The 17-year girl who was raped by soldiers of the 16th Infantry Battalion of the Philippine Army in October 16 last year is one step closer to justice after her rapists were arrested last March 30, 2011 following an order by Regional Trial Court Branch 78 of Morong, Rizal.

The military men OFC Alexander O. Barzaga, PFC Ronnie Q. Castro and PVT Rocky H. Domingo, members of the 16th IBPA have been charged with Qualified Rape in relation to Republic Act 7610 (or the law for the protection against child abuse, exploitation and discrimination) without bail.

The rape took place during the celebration of the 16th IBPA anniversary. The victim “Mutya,” together with two other minors, were invited to the camp where she was eventually raped. In February this year, Mutya’s family sought the assistance of the women’s group Gabriela in pursuing the case against the military abusers.

On March 18, the court released a resolution on the case stating the presence of probable cause. An arrest warrant for the three accused was issued 10 days later on March 28.

In reaction, Gabriela said the arrest of the three soldiers was a step toward justice for Mutya and by extension for women and children who are rape victims of soldiers.

“We are pleased with the developments of the case, particularly with the arrest of the military perpetrators. Although there is still a long way to go before the perpetrators are finally brought to the bar of justice, we hope that this initial success in Mutya’s struggle for justice would inspire other victims to also come out and pursue justice for the violence and abuse committed against them by military men and other persons in authority,” said Joms Salvador, Gabriela spokesperson. 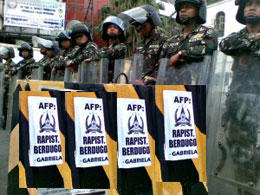 Salvador also said Gabriela would continue to be vigilant in pursuing justice for Mutya and intensify their campaign against rape by men in authority and other forms of violence against women and children.

Drugged and raped by Soldiers

In a previous report on Bulatlat.com written by Janess Ellao, it was revealed that Mutya was invited to the 16th IBPA’s small get-together inside the camp. According to Mutya’s relatives, Mutya was not a party-goer, but because her eldest sister was married to a soldier and because her other cousins were also going, she agreed to go with them.

A day after the party, Mutya’s grandmother noticed that something was amiss with her granddaughter. She also noticed that the underwear that Mutya wore the previous day was bloodstained. Alarmed, the family took her to a neighborhood healer. There, Mutya related that a soldier eventually identified as Barsaga tried to court her but she turned him down because he was married.

Immediately after, Mutya began behaving strangely and at times even became violent. She had difficulty sleeping and often sang loudly to herself.

It was consequently revealed after consultations with doctors that Mutya was drugged and she was under a drugged state when she was raped.

The family has already declared their determination to see the case to its just end for Mutya.