In less than a month, two young women from two militarized towns have complained of rape allegedly committed by AFP soldiers right inside their military camps. Alarmed women ask, are these ‘isolated’ or just the tip of the iceberg?

CAMP AGUINALDO, Quezon City – Trusting, innocent women are becoming fair game to some members of the Armed Forces of the Philippines who use their uniforms, their guns, even their camps, to commit date-rape and then try to shut up the victims. This is the alarming finding of the women’s group Gabriela as they grapple this week with the horrifying implications of two different cases of rapes allegedly committed by soldiers brought to their attention from two different places. Families of the victims approached Gabriela for help, as the cases they filed in their respective towns against the offending AFP soldiers were hardly acted upon.

On October 17, 2011, Mutya, not her real name, got invited to a party inside the camp of the 16th Infantry Batallion of the Armed Forces of the Philippines (AFP). But the small get-together turned into a nightmare from which she still has to hack her way through by demanding justice for what was done to her that night.

“She is not a party-goer. But since her eldest sister is married to a soldier and her cousins would be coming along with them, she agreed to go,” Mutya’s father, Jun, also not his real name, told Bulatlat.com.

Mutya, only 17 years old, was raped allegedly by members of the 16th Infantry Battalion of the Armed Forces of the Philippines. Tagged as her rapists were Private First Class Alexander Barsaga, and Privates Rocky Domingo and Ronnie Castro. 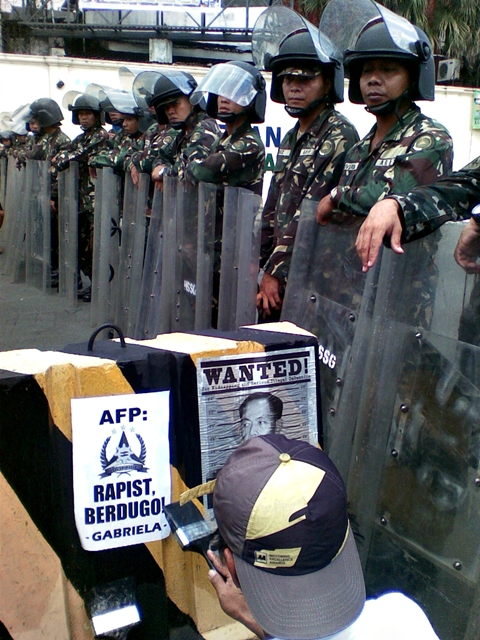 Her family brought Mutya to a quack doctor a week later, when she still acted strange. At the quack doctor, she mentioned that a soldier, whom they later identified as Barsaga, had courted her. She discovered however, through her brother-in-law who is also a soldier, that Barsaga is already married, so she turned him down. She added that Barsaga courted her for her virginity.

When they got home, Mutya suddenly turned violent. She started shouting: “Alexander Barsaga, you’re under arrest! Child Abuse! Tomorrow, you will be beheaded!” She also started singing to herself. She cannot sleep.

Mutya’s cousin accompanied her to the Department of Social Welfare and Development (DSWD) in the municipality of Baras in Rizal, where she managed to narrate to a social worker how the soldier “touched” and pinned her down with his body. She said that she and her cousin became sleepy after eating the cake and drinking the water given them during the party.

Her family then brought Mutya to the National Center for Mental Health in Mandaluyong, where the doctor said it is possible that the drug used on Mutya that might have affected her sanity. The doctors refused to send her home, saying she needs immediate treatment.

A few days later, when Mutya could talk better, she was allowed to go to Camp Crame for a medico legal. Results show that she was indeed raped.

“Of course I am infuriated when I found out (that my daughter was raped). But my mother-in-law told me, I should not let this anger consume me for I would only be at the losing end. We are determined to file a case,” he declared.

Another woman suffered badly from members, this time, of the 9th Infantry Batallion of the Philippine Army, who are assigned in the village of Puro in Aroroy, Masbate.
Twenty-one year-old Lilia, not her real name, was a “textmate” of Archie Vasquez. Gabriela wrote in their factsheet that Vasquez had asked Lilia to meet in person, but the latter refused.

On January 21, 2012, Lilia begun receiving text messages from another soldier named Gilbert Guinito, known as Jerrick. Without seeing each other in person they officially had a relationship on January 26, 2012. In the process of getting to know each other via text messages, Lilia learned that Guinito is a member of the Philippine Army, and so is Vasquez.

On January 30, 2012, Guinito asked Lilia for a meeting. When she refused, Guinito threatened to send a virus to her phone. Lilia was threatened enough to decide to meet with Guinito in the latter’s military camp.

Two men in military uniform met Lilia at the gate of the camp. They introduced themselves as Vasquez and Guinito. Lilia was then forcibly brought inside the camp, to Guinito’s nipa hut. She said she resisted Guinito’s attempt to rape her but in the end he managed to rape her.

Lilia was then brought to another soldier’s hut, to Alex Briones’, where a certain Llagas arrived. Briones asked her to take a bath. He then forced her to drink two bottles of beer. When she became tipsy, the two soldiers raped her, too.
As told to Gabriela, Lilia reportedly fell asleep but was wakened at 2:00 AM, when Briones raped her again till 4:00. She was then asked to take a bath again and go home. The soldiers reportedly warned her not to mention what happened to anyone, especially to her parents. Guinito even sent her a text message saying that if he were implicated, he would kill her.

On February 2, 2012 Lilia received a text message around 2:00 p.m. from Vasquez asking her to meet with him because he would tell her something very important. He asked Lilia to meet him in Milagros crossing but when she arrived he was not there. She then received another text message from the soldier asking her to meet him at the Milagros proper.

Lilia was brought to Carenderia Lazaro, a lodging house. Vasquez bought four bottles of beer and told her to drink two of them, then he raped her. She was at the lodging house the entire night, attempting to break free but she was repeatedly abused.
Vasquez took Lilia back to Milagros proper, where he told her she could not expect anything from him since he already has a family.

Lilia went to the military camp in hopes she could talk to the AFP’s commanding officer there. But she was made to wait the whole night outside the military camp. On February 3, she finally plucked up the courage to tell her parents what happened. They went to the police to report the incident. Her medico legal proved that she was indeed raped.

The victim filed a case on February 9, 2012. The case is currently in the hands of the Provincial Prosecution Office in Masbate and still waiting for preliminary investigation.

Impunity on abuses against women

For Jun, father of Mutya, their waiting have been too long to bear. They have filed the rape case before the Morong Regional Trial Court but until now, they have not received a single subpoena even for a preliminary investigation. They were told the soldiers who raped her daughter were already sent to Camp Capinpin but he learned from a member of the CAFGU that they are still on call for operations.

“This is why we approached Gabriela,” Jun said. “To ask for help. We want to know what to do next. We want to be educated on our rights.”

Gabriela is alarmed about these two cases of rape, both perpetuated by members of the military, within a month. In their picket in front of Camp Aguinaldo, the women’s group said the two cases are just among the several other cases of military sexual abuses they received.

“In some cases, the victims are muffled with threat and harassments,” Lana Linaban, secretary general of Gabriela, said in a statement.

In the case of Mutya, Jun disclosed that their witness has backed off from further giving statements. “She was probably harassed or threatened,” he said. His mother-in-law has also been getting offers to settle the case, amounting to $2326 for each of the accused or a total of $6978.

“We will not accept it,” Jun said.

Another glaring proof of the impunity that continues to this day is President Benigno S. Aquino III’s failure to jail retired Maj. Gen. Jovito Palparan and former president Gloria Macapagal Arroyo for the human rights violations that they have committed, said Hustisya, a human rights organization.

“There is a butcher to arrest yet the Aquino’s administration is not quickly acting on it,” Hustisya secretary general Crisitina Guevarra said. “Gloria Macapagal Arroyo, who is arraigned for charges of electoral sabotage today, continues to elude accountability to a bloody record of human rights violations. In fact, she continues to enjoy the privilege of a hospital arrest. Where is justice?”

“None of these cases ever pushed through. Justice was not served to the victims,” Linaban said. The abuses she was talking about include rape and domestic violence, among others.

Linaban noted that it has become common practice among soldiers to court women and get some of them pregnant wherever they got assigned in this country. She said there were even cases when prostituted women who invited inside military camps.

“The abuse against women is institutionalized,” Linaban said. She warned the public to not be “deceived by Oplan Bayanihan,” Aquino’s supposedly rights-based counterinsurgency plan. She said it “is essentially the same as Oplan Bantay Laya that perpetuated impunity in sexual abuses and human rights violations.”

She added that the so-called people-centered approach “renders women and children more vulnerable to military abuses. Like a spider luring flies to its web, the military’s use of deception and violence — being ‘bantay-salakay’ is a norm under Oplan Bayanihan.”

In one of Jun’s visits to his daughter Mutya at the mental hospital, he noticed that his daughter could recognize him already. ” We are hoping to get her out of there soon. She can recuperate faster outside.”