“I know that this is a ploy to cripple the trade union movement in Negros because of our critical position to the Aquino government.” Ronald Ian Evidente, KMU-Negros spokesman

MANILA — A labor rights institution is campaigning for support for a labor leader in Bacolod being falsely accused of stealing firearms for the New People’s Army (NPA). The group has already exposed the charges as “patently ridiculous” and “malicious” because the target is a well-known labor rights advocate in the region.

The Center for Trade Union and Human Rights is calling for support for the spokesman of Kilusang Mayo Uno in Negros Ronald Ian Evidente and 29 other political activists who are now facing false charges of robbery of firearms. Evidente is being accused of involvement in an alleged raid of Sagay Aqua Venture Corporation (SAVECOR) by the NPA.

Savecor is in Sagay City and owned by the nephew of Negros Occidental Gov. Alfred Marañon.

Earlier this month on April 4, Evidente informed and sought the CTUHR’s assistance following information that a warrant of arrest was issued against him on charges of robbery.

Evidente only learned of the charges in April 3 when one of the accused, Christian Tuayon- secretary general of Bagong Alyansang Makabayan (BAYAN)-Negros, was arrested in a rally in Bacolod City. Evidente eluded the arrest with the help of workers and fellow activists and was forced into hiding.

Evidente said the charges and subsequent arrest warrant came as a surprise to him and his co-accused as they did not receive a subpoena from Regional Trial Court Judge Renato Muñez. He said there had been no preliminary investigation. Instead, the RTC issued an arrest warrant on January 20, 2012 and set bail at P40,000 ($930) for each of them.

Case documents gathered by the human rights group Karapatan-Negros and CTUHR comprise of a page and half of information and affidavits of supposed complainants. 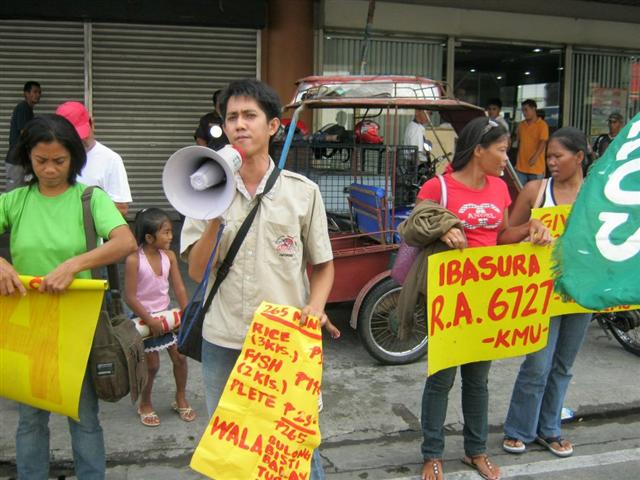 In a sworn statement of the private complainant Mr. Arn V. Bellonio, he said that he received a phone call on July 16, 2011 at around 10:09 p.m. from Ricardo Almencion, the fishpond technician, telling him that “an undetermined number of armed men” broke into the fishpond and illegally took firearms (M16 rifle, shotgun, 22 caliber revolver, six (6) pieces magazine with ammunitions, two (2) M14 rifles and 12 pieces spare magazines with ammunitions) plus a radio transceiver all of which approximately cost a total of P270,000 ($6,428).

In the meantime, another supposed witness Ruel Bulanon in his sworn statement said that he was on his way to Savecor’s main building after feeding the shrimps at 9:15 p.m. on July 16, 2011 when he heard shouting near the storage room.

Upon checking the area, Bulanon said he “saw an undetermined number of armed men” who were on their way to enter the tower. Bulanon said he tried to stop them but was made to lie face down on the ground together with other workers until the men took the firearms and left. He supposedly immediately ran to Almencion’s house who in turn called Belonio on the phone.

In the subsequent police report, Bulanon only identified two persons, a certain Rogelio Dañoso a.k.a. Gido/Estong, and a Joefrel Along alias Dodong Pocky as among the group of men who raided the fishpond.
Saudi Quinto, also a worker at the fishpond, issued an affidavit stating that on the same time and day on July 16, 2011, he heard a commotion. He then saw three men holding his co-worker at gunpoint, but he did not identify the men.

Quinto said he tried to fight by grabbing an M16 rifle, but he was overpowered and subsequently held hostage together with two other co-workers until the men left, taking the weapons and and other personal effects of the watchmen.

Another supposed witness, a certain Freddie Sanchez said he was a former Squad Leader of the NPA. In his affidavit, he identified 29 individuals including Evidente whom he called “Ramon” as people “behind the planning and implementation of the said raid of the fish farm of the Sarrosa family at Sagay City.” Sanchez said the squad unit he led was given the task “to augment the squad of Ka Adoy, who will be in charge of implementing the plan.” He said that the raid was set at 8p.m. on July 16, 2011. 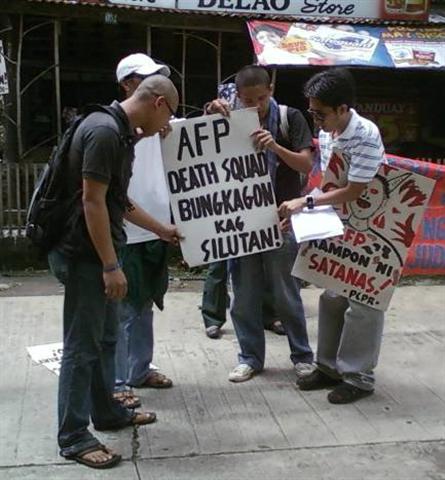 He also alleged that he was “required to be present” in the meetings and that on the very night of the raid, his squad stationed itself at the outskirts of the Sarrosa party after coming straight from Escalante. He said his squad was assigned to do lookout work in case any forces of the Armed Forces of the Philippines (AFP) or the Philippine National Police (PNP) arrived.

A labor organizer for Our Lady of Mercy Hospital

Evidente has already issued a public statement denying the charges and insisted that he is a labor organizer assisting workers in Our Lady of Mercy Hospital in Bacolod City who were contending with the hospital administration’s labor rights violations including unjust suspension and termination. Bulatlat.com has previously released a story on the issues afflicting the union at the said hospital, verifying Evidente’s identity as a labor rights organizer as he was the main source of the information for the story. He has been with the union since 2009.

Evidente has since remained busy helping the workers union and was instrumental in helping the union forge a collective bargaining agreement (CBA). He was supposed to attend the signing of the said CBA on April 10 when the warrant was enforced. Evidente was forced to miss the CBA-signing ceremony and had to post a P15,000 ($349) bail through a surety bond only in April 13 for his temporary freedom.

Being slapped with criminal charges is not new to Evidente. In 2004, when he was a nominee of the Anak ng Bayan Partylist (a youth partylist group), he was also charged with murder under the regional trial court in Negros Oriental. He was detained for 15 days and was allowed to post bail because of weak evidence. The case is still pending to date.

In the meantime, Evidente has also risen to become KMU’s spokesman in Negros and has helped echo the issues of Negros workers from the local to the national levels.

“I did not rob anyone or steal anything. I am a KMU labor organizer under the National Federation of Labor Unions. The Philippine government maliciously inserted my name and Bagong Alyansang Makabayan Negros Secretary general Christian Tuayon in the robbery in band case together with the NPA. The Aquino government has denied us our rights to due process of law and to answer allegations at the fiscal level. I was able to evade arrest with the help of patriotic masses of workers that is presently securing me,” he said in a statement.

“I know that this is a ploy to cripple the trade union movement in Negros because of our critical position to the Aquino government. The former Arroyo regime and the present Aquino government have one thing in common – they are both oppressors of the toiling masses. We have been campaigning for the passage of a law implementing a P125 daily wage hike across-the-board, across-the-country since the Macapagal-Arroyo regime was in power, and we continue up to now. If Macapagal-Arroyo implemented extra judicial killings and political persecution, Aquino is continuing it under Oplan Bayanihan.”

The CTUHR is also testifying on his behalf, asserting that it has worked with Evidente on many projects in the province. Evidente helped the labor rights institution organize its Human Rights Documentation and Campaign Training and the Right to Food Workshop alongside the the Asian Human Rights Commission(AHRC-HK) and other local organizations from April and July 2010.

“Ian was also our local partner and coordinator in the Visayan leg of the Psychosocial Workshop and Children’s Workshop to rehabilitate families of victims of extra-judicial killings and other human rights violations. The workshops were held on November 2010 as part of our European Union-funded project,” said the CTUHR in a statement.

A tactic of persecution against activists

According to the CTUHR, the filing of fabricated criminal charges has been a long-standing tactic of the government to harass, immobilize and persecute political activists and human rights defenders. It said that this has been the subject of the International Labour Organization High Level Mission to the Philippines in 2009, where the Philippines was directed to ensure that trade unionists and labour rights activists are not hampered in their functions.

“Despite the change in government and commitment to the ILO recommendations, this practice continues as part of the Internal Peace and Security Plan (IPSP) or widely known as Oplan Bayanihan, the state’s counter insurgency program, that continue to malign legal organizations, trade union organizers and activists by grouping them with the rebels as one and the same,” the labor rights center said.

It will be recalled that Evidente is not the first labor leader to have been subjected to this form of political harassment in recent years. Labor lawyer Remigio Saladero Jr. of the Pro-Labor Legal Assistance Center (PLACE) together with other activists was slapped with fabricated multiple murder and frustrated murder charges several times since 2008. The case was recently dismissed for lack of substance. Highly-respected labor leader and former lawmaker Crispin Beltran was arrested and detained for 18 months from January 2006 to July 2007 on fabricated charges of rebellion.

The CTUHR is appealing to the public to help Evidente regain his freedom and help in putting together his bail bond amounting to P40,000 ($930). Contributions can be sent to the bank account of Naflu-KMU Negros, account number 1871199521 at the China Banking Corporation or China Bank.

It also appealed for letters to police and local government authorities and Philippine Embassies calling for genuine investigations into the case, and the dropping of the criminal charges against Evidente and other labor and human rights defenders facing false charges.