MANILA –The hospital prides itself in providing its clients and patients quality health care, but it’s own employees who provide the said health care are up against unfair labor practices.

For almost six months now, employees of the Bacolod Our Lady of Mercy Specialty Hospital (BOLMSH) in Mandalagan, Bacolod City have been battling the hospital management’s refusal to recognize their labor rights, including the right to form a union and forge a collective bargaining agreement.

According to the employees union, the Bacolod Our Lady of Mercy Specialty Hospital Employees Union, the hospital management led by chief operating officer Dr. Evangeline C. Johnson does not uphold or respect labor laws. The hospital reportedly does not remit employees’ Social Security System contributions and has not implemented the last three wage orders 16, 17, and 18. In the meantime, it also terminates employees without due process.

“The hospital claims to be a Christian Institution. It even carries the slogan “Cure the sick and care for every individual who works for the common good of all.” Too bad the slogan doesn’t apply to the employees,” said the employees.

The hospital workforce consists of some 300 workers, primarily nurses, doctors, medical orderly, janitors, midwives, pharmacists, health aid and office staff. The union leadership, in the meantime, is primarily comprised of members of the janitorial staff and medical orderlies.

“It’s terrible that existing health care system doesn’t care if our medical workers are being exploited and their rights abused. The country’s health care system is controlled by greedy businessmen hungry for profits. We, the health care workers, are falling sick because we are being denied our economic and political rights,” said the employees.

This is not the first time that the hospital figured in the news because of reports of anomalies.

In late 2008, the hospital was slapped with heavy sanctions after it was found to have fabricated claims for cataract surgeries conducted on patients recruited through medical missions. The Philippine Health Insurance Corp. (PhilHealth) issued its verdict in a 14-page decision dated Sept. 16 of that year.

Based on reports, the PhilHealth Arbitration Department found the hospital guilty of six counts each of “padding of claims” and “breach of accreditation.” 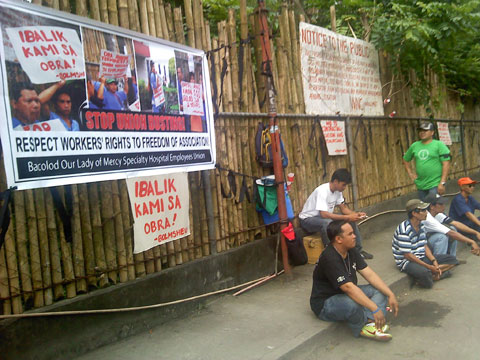 PhilHealth also ordered the denial of payment for the six claims found to have been padded, or for the hospital to refund the health insurance agency if the claims have already been paid.

The case stemmed from a complaint filed by the PhilHealth’s prosecution department in Jan. 7, 2008 over the PhilHealth claims of six patients who underwent cataract surgery.

The hospital, according to reports, filed claims that it utilized oxygen and intravenous fluids during the surgeries on the patients.

The Philhealth’s findings after verification with the patients showed ,however, that no oxygen or IV fluids were administered at any time during their confinement. A PhilHealth position paper said the patients are recruited and screened “in the guise of free medical outreach programs” through “recruiters-agents” sent out by ophthalmologists in coordination with the hospitals where the operations are performed.

For its part, the hospital had moved for the dismissal of the complaints and questioned the authority of PhilHealth officials and employees who conducted the investigation to administer oaths to documents related to case.
A Long List of Labor Violations

Based on a fact sheet presented by the union, employees who were terminated several years ago did not receive the exact separation benefits due to them. Some were not even given their separation pay. It also came out that the SSS premiums of the terminated and resigned employees were not paid despite the continuing deduction from their salaries.

On October 23, 2010, some 60 employees from different departments conducted a dialogue with Johnson in the hope that the issue of the two-year year non-payment of their SSS premiums despite the continuing payroll deduction of employees’ contributions could be settled. The non-remittance of the SSS premiums denied employees the right to avail of many benefits like salary loan, sick leave and other benefits.

When the management refused to speak with the employees, they proceeded to organize themselves into a union which they immediately registered with the Department of Labor and Employment (DOLE).

On December 7, 2010, about 80 union members arranged another dialogue with the management again on on the issue of SSS premium remittances, implementation of Regional Tripartite Wages and Productivity Board’s last three wage orders, but the management committed to nothing. According to reports, Johnson only gave a talk exhorting the employees to make further sacrifices, and then walked out of the conference room where the dialogue was being held.

The union filed a Petition for Certification of Election before the Bureau of Labor Relations of the Department of Labor and Employment in December 20, 2010.

A certification election is the most democratic and expeditious method by which the workers can freely determine the union that shall act as their representative in their dealings with the establishment where they are working.
As defined by Philippine law books, “certification election” means the process of determining, through secret ballot, the sole and exclusive bargaining agent of the employees in an appropriate bargaining unit, for purposes of collective bargaining.