You Are Here: Home → 2012 → May → 1 → Advocacy group for indigenous peoples pushes agenda for education

Since 2009, militarization has caused the closure of schools and disruption of classes in the rural areas of Mindanao.

The Rural Missionaries of the Philippines-Northern Mindanao Sub-Region (RMP-NMR) recently released a paper premised on the impact of military operations on campaigns for the education of indigenous peoples in the country. It said that in the last decade, the national government has done very little to improve the welfare of indigenous peoples particularly in Mindanao. In the meantime, military operations have also served to undermine the efforts of indigenous communities and people’s organizations to develop their own systems for improvement.

According to the United Nation Development Programme (UNDP), there are between 14 million to 17 million Filipinos spread across 110 ethno-linguistic groups. Most of these ethnic groups are concentrated in Mindanao with 61 percent. Luzon has 33 percent of these indigenous people while the rest are in Visayas.

In a paper titled, “Education and Militarization of Indigenous Communities: Our Experience as Rural Missionaries in Mindanao”, RMP-NM’s subregional coordinator Sr. Ma. Famita Somogod dissected how the national government’s declarations to help indigenous peoples have not resulted in any concrete gains for the the latter.

Somogod said that even as the government has identified education as its priority service, the indigenous peoples of Mindanao view it as a “vague illusion.” She said accredited schools supposedly established for indigenous peoples were built or established in areas far from the communities. Many residents are also unable to pay even the smallest fees, and some of the Lumad children spend their formative years in community alternative learning schools usually established with the aid of non-government organizations.

“Even in the rare situations where communities are benefited by a literacy and numeracy school, these are not sustained because of counter-insurgency operations of the Armed Forces of the Philippines (AFP). Instead of protecting the communities from rebel groups, the communities have become the targets of the operations. Militarization and war have resulted to human rights violations, exacerbating the living conditions of the already impoverished indigenous communities, with indigenous children becoming most vulnerable,” she said.

To the RMP-NMR’s reckoning, no qualitative change in the situation has taken place since the visit of United Nation’s Special Rapporteur on the Situation of Human Rights and Fundamental Freedoms of Indigenous Peoples Rodolfo Stavenhagen to the country in December 2002.

Stavenhagen made a 10-day official visit to the Philippines at the invitation of the Macapagal-Arroyo government in 2002. While here, he met with various governmental officials, indigenous peoples, and non-governmental organizations.

The Special Rapporteur spoke with officials of indigenous peoples’ and human rights organizations, primarily in Baguio City, Mankayan, and Butuan as well as in Manila.

The Stavenhagen Report that was published in March 2003 stated the fact that “militarization of indigenous communities and territories in the course of counter-insurgency operations has created an ongoing crisis causing numerous human rights violations affecting indigenous peoples who are often times caught up in this fight between government troops and rebel groups.”

A decade later, the situation has barely changed.

Since 2009, militarization has caused the closure of schools and disruption of classes in the rural areas of Mindanao. Among these had been the Alternative Learning Center for Agriculture and Livelihood Development (Alcadev) and the six schools of the Tribal Filipino Program of Surigao del Sur (TRIFPSS).

The military has been documented harassing residents of indigenous people’s communities, accusing them of supporting the New People’s Army (NPA). As for the schools, the military claimed that these were “training ground for future NPA soldiers.”

In Dlumay, Malapatan town of Sarangani, the B’laan Literacy School and Learning Center (BLSLC), has remained closed since March 2011. Students were accused as child NPA members. On March 15 that year, Jimboy, a 10-year-old B’laan pupil, was forced to don a bandolier loaded with bullets on his shoulders and carry an M-16 rifle, while a soldier took his picture. After that, Jimboy was reported as an “NPA child warrior going to school in Dlumay.”

As for the national government, the Department of Education has announced its efforts to providing education to indigenous peoples in the country.

In a report by Alexander Villafania, it said the DepEd has opened a delivery facility for education materials for indigenous peoples. Called the Indigenous People’s Education Office (IPsEO), the new sub-agency will serve as a clearing house and lead in planning, implementing, and monitoring activities related to indigenous people’s education.

According to the report, the creation of the IPsEO is mandated by Republic Act 8371 or the Indigenous People’s Rights Act of 1997 wherein government offices are supposed to recognize and promote the rights of indigenous cultural communities by integrating activities within their framework of policies.

“Education for indigenous people is different as it is integrated into their communities’ nuances. Basic education materials are also delivered in the mother tongue of the indigenous culture. This enables the Philippine government to provide basic to advanced learning while preserving cultural heritage,” said the DepEd.

According to Somogod, schools specifically those in northern Mindanao such as those established by the RMP-NMR, have been forced to shut down because of increasing militarization and human rights violations against the host communities.

In 2009, in Barangay Kinamaybay, Esperanza, in the province of Agusan del Sur alone, approximately 151 children have been affected when families were forced to evacuate after their community was occupied by a platoon from the 30th Infantry Battalion of the Philippine Army (IBPA).

On July 15, 2009, Arnel Mansinugdan, a 10-year old boy was thoroughly investigated by the military. Soldiers kept forcing the boy to /declare all he supposedly knew about NPA operations in the area.

The primary school in the neighboring community, Barangay Agsabo, was forced to shut down on July 19 that same year after families – including approximately 185 children – had to evacuate when elements of the 26th IBPA camped in their barangay center.

“The use of public buildings such as the school and barangay hall as base by military personnel has been a regular occurrence during military operations. Additionally, the youth, as young as 13 years old, were also being recruited to the CAFGU,” Somogod said. 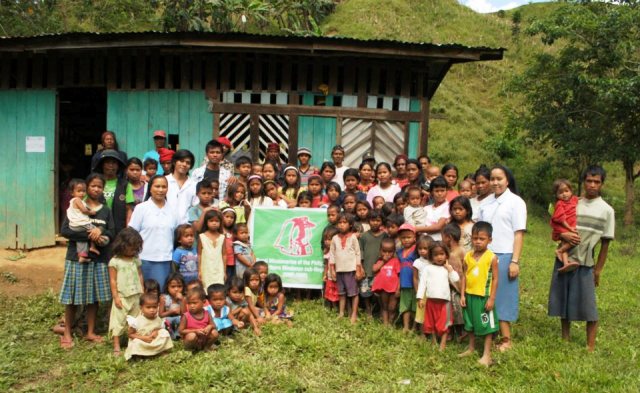 In St. Peters, Malaybalay, Bukidnon in 2009, there were reports that three para-teachers were relocated by church groups after local CAFGU elements made threats to their lives. The three had previously spoken to members of a church-led fact finding mission about the harassment that CAFGUs were doing against their alternative schools in the community of Balaodo.

The previous March 29, 2008, 55 families from the same community were forced to leave their community after the military took over the local school building. Many of the school’s pupils dropped out and consequently joined their parents in hiding in the surrounding forests.

Through all this, however, Somogod said the RMP-NMR sought to continue its campaign to provide education to indigenous peoples. The group reopened 16 schools in July 2011.

“Unfortunately, this initiative was met with threats. In June that year, Deo S. Manpatilan, the mayor of Esperanza- Agusan del Sur, accused the schools of teaching children ideas and songs of the NPA. He also said that if the community wants development, they should accept mining companies which will provide them with schools,” she said.

In another case, the RMP-NMR’s attempt to reopen the school in St. Peters, Malaybalay, Bukidnon was blocked by the military under the 8th IBPA despite the approval of the city mayor for the project. Elements of the 8th IBPA accused the para-teachers of being NPA organizers, using the school for such purposes.

Education as an inaccessible fundamental right

The right to education is one of the fundamental rights proclaimed by the Universal Declaration of Human Rights (UDHR, Article 26). This has since been affirmed in numerous global human rights treaties. It is considered by the UDHR not only as a right in itself but also as a means of promoting peace and respect for human rights and freedoms generally.

Article 28 of the Convention of the Rights of the Child (CRC) recognizes the right of children to education and sets forth the obligation of State parties to the Convention. However, while CRC is almost universally ratified, it is by no means universally applied particularly in situations of armed conflict which has long-reaching effects on children.

In an attempt to mitigate the impact of armed conflict on children, the UN Security Council Resolution 1998, approved in 2011, declared attacks on schools and hospitals as violations that may result in an armed force or group being “blacklisted.”

“In a conflict situation, children are robbed of both their right to learn and their right to live a child’s life. They are forced to violent realities too early, forced to experience terror too often. And this is not yet even going into the post-conflict trauma that these children suffer. Without access to education, there will be no room for indigenous communities to promote personal development, strengthen respect for human rights and freedoms, and enable individuals to participate freely in a free society,” Somogod said.

‘It’s already a given education is necessary for the fulfillment of any other civil, political, economic or social right. Without the right knowledge, indigenous communities will remain as they are—easily intimidated, frightened, coerced. It is not surprising that when they are armed—as exemplified by groups that have been trained and backed by the Philippine Army to act as their auxiliaries—they have a sense of invincibility and have consequently terrorized the unarmed indigenous people’s communities,” she said.

Somosogod said illiteracy “has been a cause and effect of the perpetuation of poverty in Mindanao’s indigenous communities.”

“Worsening this chronic poverty, indigenous peoples’ resource-rich ancestral domains have become targets of ‘development’ aggressions that displace their entire community. The ancestral domains of indigenous communities are being encroached by agri-business ventures, mining and logging concessions with many of the community members not knowing the laws that could safeguard them from abuse, how to assert their rights over their lands, their culture and traditions, and to their basic freedoms such as their entitlement to say yes or no to projects through the Free Prior and Informed Consent. Children need to understand that asking for your rights to be respected is not a criminal act but rather a legitimate demand. Without education to facilitate this, the indigenous peoples will be subjected to a repeated cycle of oppression and exploitation,” she said.

The RMP-NMR said the huge displacement of students because of armed conflict all the more pushes it to reopen its literacy and numeracy schools.

“Reopening these schools without keeping in mind the problems that hampered their operation in the past will make this initiative short-lived,” Somogod said. This is why, she said, the group and its partners are focused on helping communities develop “human rights orientedness” as stakeholders and as rightful owners to defend the group’s education initiative.

“We want to put in place protection mechanisms so that the schools, and even the community, will be secured from the perennial problem of militarization and human rights violations and will be saved from being closed again,” she said.

The group recently developed a partnership with the United Nations Children’s Fund (UNICEF) to help para-teachers and the communities in monitoring and documenting rights violations against children in armed conflict situations as a first step towardsempowerment of the stakeholders of the schools.

“We are also stepping up our campaign to secure the literacy and numeracy schools that we have by popularizing these schools, while campaigning against human rights violations and militarization of indigenous communities that have been the culprit of the closures. By mobilizing communities to defend the schools, by using all of the available mechanisms, and by mustering public eye locally, nationally and internationally to all of these efforts, we can be sure that our schools for indigenous children will keep going for the indigenous communities in need,” she said.