Rarely does one see Pres. Benigno “Noynoy” Aquino III to be so unequivocal and firm about policy issues. But recently, he did exhibit political will and decisiveness. Unfortunately for the working people, he demonstrated his resolve in rejecting two important issues confronting the Filipino worker: the call for a P125 increase in the daily minimum wage nationwide, and a proposed law prohibiting contractualization of labor. For this, he was branded as “anti-worker” by progressive labor groups.

However, there is more to President Aquino than just being anti-worker. Sure, he has shown nothing but disdain for the Filipino masses by making it difficult for the farm workers of Hacienda Luisita to obtain the land that is truly theirs and with no accomplishment to boast of, not even a single showcase, in agrarian reform. He has also repeatedly rejected any form of relief for the suffering Filipino worker who is being deprived of the right to a decent wage, secure employment, and right to unionize. Even his promotion of the conditional cash transfer program, which encourages patronage politics and mendicancy, demonstrates how he views the Filipino working masses.

President Aquino is actually just being faithful to the neoliberal dogma being pushed by the Chicago school of economics and is being imposed by the world’s powers, especially the US. Since its implementation in the 1980s, the neoliberal policies of deregulation, liberalization, and privatization have sent prices of basic goods and services soaring, drastically brought down real wages, effectively attacked the security of tenure of workers, and broke the back of unions.

During its first two years of implementation in Bolivia, for example, real wages dipped from 40 to 70 percent. In the US, where unions are not known for their militancy especially after the attacks on the big unions in the latter part of the 1950s to the early 1960s, data from the government Bureau of Labor Statistics, as of January 2011, revealed that the number of unionized workers in the private sector dropped to a mere 6.9 percent, a historic low during the last century. Unemployment in the European Union has reached a historic high of 9.9 percent, affecting 23.6 million people.

In Britain, the real income of the poorest 20 percent fell by 2.6 percent in the three years to 2007-08, while those in the top fifth enjoyed a rise of 3.3 percent. In the US, the share of wages and salaries in the national income continue to decline since neoliberal policies began to be implemented after the 1970 crisis, as shown in the table below. 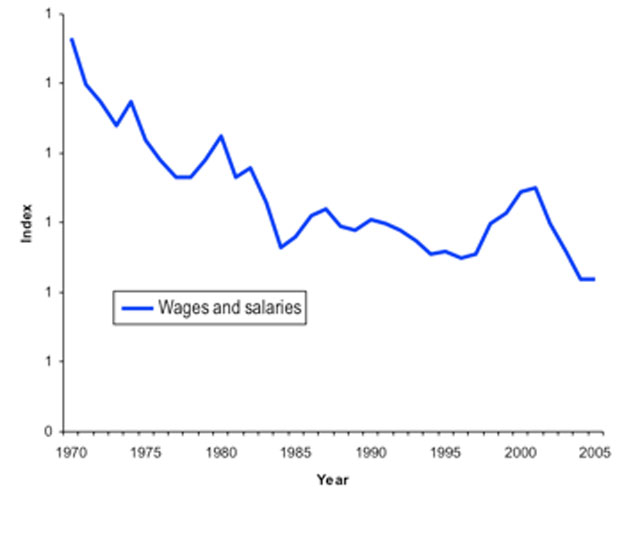 While, the share of corporate profits increased, as shown in the following table. 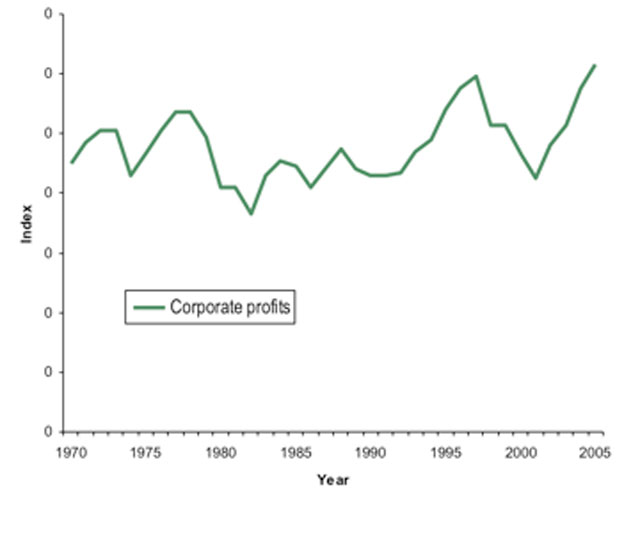 Also in the US, according to an article by Michael Snyder published in July 15, 2010:

In the Philippines, according to Ibon foundation, there are 20.8 million Filipinos jobless or in insecure, low-paying and even hazardous work, equivalent to around 52 percent of the labor force – or 4.4 million unemployed, 4.2 million unpaid family workers and 12.3 million own account workers. In terms of real wages, in the National Capital Region for example, according to Ibon Foundation, the NCR minimum wage of P426 ($9.90) daily is worth P245 ($5.68) in real terms (measured in 2000 pesos). This real value is even less than the February 2002 mandated minimum wage of P280 ($6.51), which was equivalent to P258 ($6) in real terms.

This neoliberal dogma, which is being faithfully implemented by the Aquino government, as well as the previous administrations, has resulted in a tremendous increase in corporate profits at the expense of widening income disparities, and the worsening poverty and crisis. That is why it has been called as “corporatism” by some analysts, including Naomi Klein who wrote an excellent book about the imposition of the neoliberal dogma in different countries. The neoliberal dogma essentially favors giant multinational corporations and banks and is anti-worker and anti-poor and therefore, could not have been implemented without the use of state coercion. That is why Lenin called it imperialism.

This is where the political decisiveness of the Aquino administration is being clearly demonstrated. This is what is bringing it to an intensifying conflict with majority of the Filipino people, especially the toiling masses.