The miracle of breast milk

Many of my friends are amazed whenever they learn that I am breastfeeding my baby. Some friends who also have children but did not breastfed would say, “My baby doesn’t want to suck my nipple” or “She can’t get milk” or “There’s no milk coming out from my breasts.” All that I can just say is, “Really?”

Taking good care of your baby is not just about giving them the most expensive clothes, shoes and other accessories or making sure that she doesn’t bump her head. The most ultimate care that mothers can give their babies is breast milk that can protect them from a long list of illnesses. To quote an article about breastfeeding, “Breast milk fights disease. The cells, hormones, and antibodies in breast milk protect babies from illness. This protection is unique; formula cannot match the chemical makeup of human breast milk.”

On the other hand, babies who are formula-fed are prone to ear infections and diarrhea. Formula-fed babies also have higher risks of necrotizing enterocolitis, a disease that affects the gastrointestinal tract in preterm infants, lower respiratory infections, asthma, obesity and type 2 diabetes.

There are many reasons why mothers should breastfeed their babies. An article from the Babycenter.com said the benefits of breastfeeding e xtend beyond basic nutrition. “In addition to containing all the vitamins and nutrients your baby needs in the first six months of life, breast milk is packed with disease-fighting substances that protect your baby from illness.”

It is also recommended that mothers should exclusively breastfeed their babies in their first six months (no water, solid food or formula milk). Exclusive breastfeeding for the first six months, says the Babycenter.com, offer the most protection. The early breast milk, known as liquid gold, the colostrum is very rich in nutrients and antibodies to protect the baby. The Babycenter.com article also said breastfeeding can reduce a child’s risk of developing certain childhood cancers because antibodies in breast milk give a baby’s immune system a boost. 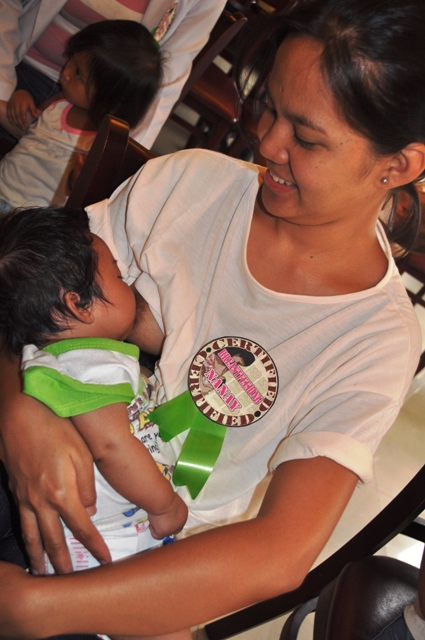 The Association for the Rights of the Child in Southeast Asia, a non-government organization promoting children’s rights is actively campaigning for breastfeeding. (Photo courtesy by Arcsea / Bulatlat.com)

Breastfeeding is not only best for baby’s health but mothers too. Aside from getting back to shape, the mother’s uterus contracts and therefore prevents postpartum hemorrhage and promote uterine involution or, according to the article the return to a non-pregnant state. Breastfeeding mothers also have lower risk of ovarian and breast cancer.

Also, according to an article entitled A well kept secret: Breastfeeding’s Benefits to Mothers says a numerous studies have shown that non-breastfeeding mothers have higher risk of reproductive cancers. “Ovarian and uterine cancers have been found to be more common in women who did not breastfeed. This my due to the repeated ovulatory cycles and exposure to higher levels of estrogen from not breastfeeding,” the article read.

Breastfeeding is practical too. Not only that you save big amount of money from buying formula milk but mothers can also save money from the costs of having sick child who often visits the doctor because of poor health condition.

I am also not fully aware of the benefits of breastfeeding. All I know is that my children will be healthy when I breastfeed them. I too was breastfed by my mother until I was one year old and I am quite healthy and of course I want my children to be healthy too.

“Public health agencies advocate for breastfeeding because of its well-documented health advantages to babies, but they fail to convey to individual mothers and families the potential emotional impact of this very crucial infant-feeding decision. In Western society, the decision about breast or bottle feeding is still seen very much as a personal choice based on convenience. The potential stress of living with a child with recurrent illnesses, or the loss of the unique bond that comes from breastfeeding, are often omitted from the decision-making process.”

It also added that there is much more to breastfeeding than the provision of optimal nutrition and protection from disease through mother’s milk. “Breastfeeding provides a unique interaction between mother and child, an automatic, skin-to-skin closeness and nurturing that bottle-feeding mothers have to work for to replicate. The child’s suckling at the breast produces a special hormonal milieu for the mother. Prolactin, the milk-making hormone, appears to produce a special calmness in mothers. Breastfeeding mothers have been shown to have a less intense response to adrenaline.”

One thing that I also learned from my own experience is that breastfeeding is also about determination and willingness of the mother. When I delivered my first born, I was not determined to breastfeed her. I was like other mothers out there who bottle feed their babies because of the wrong belief that the baby can’t get enough milk .

When my Gynecologist saw that my daughter was bottle fed and asked me why, I told her that she can’t get enough breast milk. She told me, “Let her be hungry and she will find a way to feed herself.” Of course she was right! And what she said stuck on me. My second baby was breastfed until she was two. My third is also breastfed. There was a regret of course that I did not pursue breastfeeding with my first baby because she developed allergic rhinitis and asthma. We also often visit the doctor when she was still a baby. At five months she had to take strong anti-biotics because of bronchitis. At three years old she was confined because of amoeba. If she was breastfed, she would have been healthier. Not only is it painful to see your baby sick, it is also very (with an emphasis in the word very) costly.

So why still opt to give formula milk when breast milk can prevent the most serious illnesses that can harm or even take away your baby?

There are just things that you really have to work hard on for you to get the best result. Breastfeeding can be very painful during the first months of the baby; your nipples will be sore, your breasts are hard and full. It can still be painful while your baby is growing when they are already biting. But I can say that the pain is all worthwhile.