KMP warns vs loopholes in SC decision on Luisita distribution

“There’s no room for complacency at this point in our fight – we have to push for actual and immediate land distribution.” – Unyon ng mga Manggagawa sa Agrikultura

MANILA — The fight for Hacienda Luisita is still far from over. In fact, it’s only beginning.

According to the Kilusang Magbubukid ng Pilipinas (KMP) the Supreme Court has actually provided President Benigno Aquino III’s family with an opportunity to maneuver and maintain control over the contested 6,000 hectare-land.

The High Court on April 24 released its decision ordering with finality the distribution of Hacienda Luista to its farm workers.

KMP deputy secretary general Randall Echanis said that upon scrutiny of the decision, it became evident the SC has given the Cojuangco-Aquinos “ the opportunity to further derail and even evade land distribution.”

“The valuation issue alone on Hacienda Luisita could drag for years. It may even outlive the bogus Carper and even the Aquino regime. This case might even go back to the Supreme Court,” Echanis said.

Carper is the Comprehensive Agrarian Reform Program Extension with Reforms or Republic Act 9700, which extended and supposedly amended the agrarian reform law of the Cory Aquino administration. The Carper was passed in 2008. 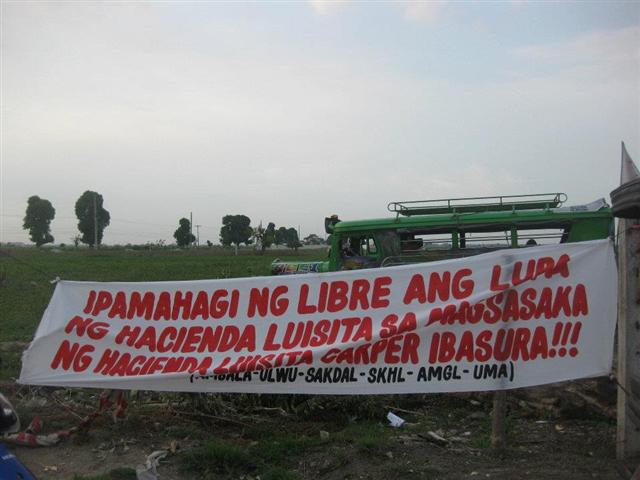 Echanis said that while the High Court resolved the date of ‘taking’ in –which serves as basis for the valuation of the land – on November 21, 1989, the high court affirmed that the Department of Agrarian Reform, the Land Bank, or even the special agrarian court would determine the value of the lands,” the peasant leader said.

The KMP leader cited the April 24 SC decision stating that “As regards the issue of interest on just compensation, We also leave this matter to the DAR and the LBP, subject to review by the Regional Trial Court acting as a SAC or Special Agrarian Court.”

“The SC also wants the farmworker beneficiaries to pay for the interest of just compensation when, in fact, the Cojuangcos and not the farmworkers have benefitted from the Hacienda for more than half a century now,” Echanis said. “Even the 240-square meter home lots that had long been distributed to farmworkers for free was ordered by the SC to be paid by the farmworkers.

The home lots would also increase the computation of the just compensation.” 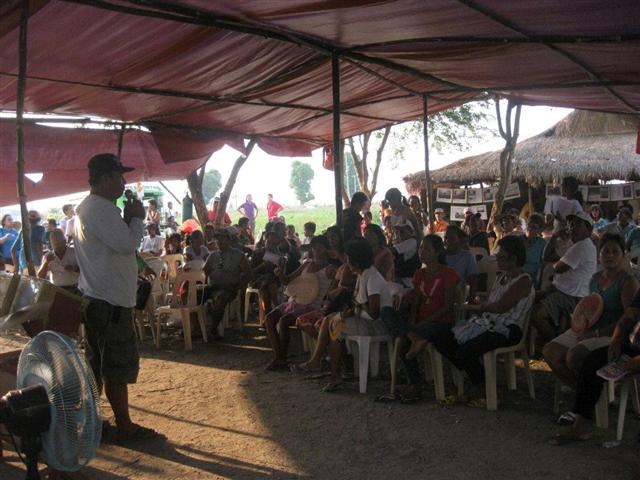 Hacienda Luisita farmworkers led by the Alyansa ng mga Manggagawang Bukid sa Asyenda Luisita and Unyon ng mga Manggagawa sa Agrikultura hold a and solidarity activity on May 9 to mark their victory at the Supreme Court and call for continued vigilance against maneuverings of the Cojuangco-Aquino family to sabotage land distribution.(Photos courtesy of Alyansa ng Magbubukid sa Gitnang Luson / bulatlat.com) 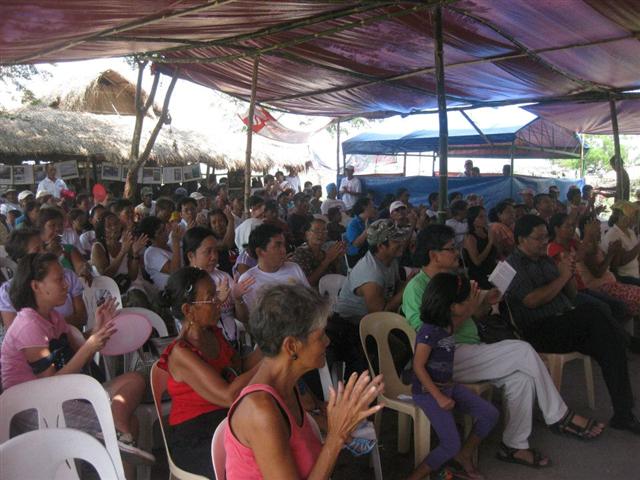 In the April 24 decision, the SC ordered the DAR to compute the just compensation of the home lots in accordance with existing laws, rules and regulations.

Agrarian Reform Secretary Virgilio de los Reyes also recently said that “Although the landowners can question the valuation with the Department of Agrarian Reform Adjudication Board (DARAB) and the Special Agrarian Court and higher courts on this matter, such a challenge will not stop the acquisition and distribution process and the eventual issuance of Certificates of Land Ownership Award to beneficiaries.”

Echanis said de los Reyes’ statement is an admission that the Cojuangcos would exploit the issue to further prolong the agony of Luisita farmworkers.

“But we doubt that the DAR could pursue the distribution of the lands while addressing the issue of valuation. The issuance of CLOAs to beneficiaries cannot guarantee the farmworkers’ ownership. A CLOA is just a piece of paper telling the farmworkers to pay for the lands,” Echanis said adding, “there are thousands of unresolved agrarian cases involving tens of thousands of hectares which stems from the cancellation of CLOAs, Certificate of Land Transfers, and even Emancipation Patents. The more than 8,650 hectares of Hacienda Looc in Nasugbu, Batangas is one case in point.”

Echanis added that “instead of decisively ordering the DAR to immediately distribute the hacienda, the SC gave the DAR six (6) months to implement the decision that also gave the Cojuangcos ample time to maneuver and evade land distribution.”

While taking the warning of the KMP to heart, the Hacienda Luisita farmworkers led by the Alyansa ng mga Manggagawang Bukid sa Asyenda Luisita and Unyon ng mga Manggagawa sa Agrikultura still held a thanksgiving and solidarity activity last May 9 to mark their victory.

Uma secretary-general Rodel Mesa said that while they are elated by the decision, they have no illusions that it will be immediately implemented.

“That the SC decided in our favor is already a victory, but by no means is the battle over. The struggle of the Hacienda Luisita farm workers still has a long way to go. There’s no room for complacency at this point in our fight – we have to push for actual and immediate land distribution,” he said.

Mesa explained that they held the thanksgiving gathering also as a means to consolidate their supporters and explain to all the farm worker beneficiaries what the SC decision means.

“It’s very important that we are all united and on the same page on this matter. We have to stand firm on what our next steps should be and what we will need to do to ensure that the decision is implemented, that the land is distributed,” he said.

Mesa said they have no doubts that President Aquino’s family would do all it can to delay the implementation of the decision and even sabotage the process of distribution.

“”We’re sure that they will use different legal tactics to stop the land distribution. Given this, it’s really urgent that all the farmworker-beneficiaries be aware of every development in the issue: we will not depend on the SC decision alone and lower our defense,” he said. “Even as we speak the president and his relatives are taking turns to undermine the SC decision or at the least muddle the issue by demanding ridiculously high compensation for the land.”

The peasant leader also leveled criticism against the Department of Agrarian Reform, saying that the agency was actually giving legal tips to the Cojuangco-Aquinos on how to expand and explore their options even if they lose the battle to maintain the land. 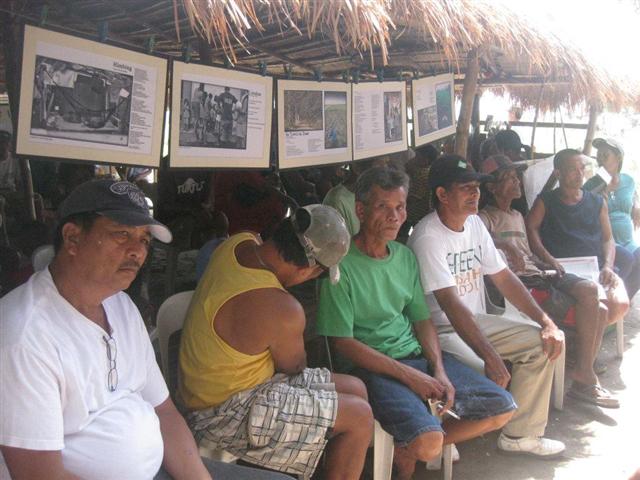 “The DAR is helping the Cojuangco-Aquinos as if they’re the ones who are the victims of injustice in this case. The family is demanding P10 billion ($232.5 million) compensation, and they’re also questioning the legitimacy of the claims of the farmworker- beneficiaries. As things currently stand, it’s also obvious that the Cojuangco-Aquinos with the help of DAR are attempting to find loopholes in the Comprehensive Agrarian Reform Program Extension with Reforms (CARPER) to delay and even sabotage the process of land distribution,” he said.

Mesa explained that if the true process of law is being followed, the Cojuangco-Aquinos should recognize its tenants. “Then the farmworker-beneficiaries – all of whom have been tenants – should be taken to court to swear and re-affirm their obligations to pay for the land through amortization. The local village chiefs should also have begun the process of vouching for the legitimacy of the farm workers. But again, the Cojuangco-Aquinos will never ever recognize Amabala members as their tenants, but we will not be deterred by this. We will not stop until all the legitimate farmworker-beneficiaries have been recognized and the land has been taken from the control and ownership of the Cojuangco-Aquinos and transferred to the tillers,” he said.