Another activist was killed by an unidentified gunman, May 9 at around 6:15 p.m. at Palma Kibawe village in Bukidnon, Northern Mindanao, according to human rights group Karapatan.

Margarito Cabal was an active leader of Task Force Save Pulangi (TFSP), which is campaigning against the construction of a hydroelectric dam in Pulangi River that threatens the integrity of the ecosystem and would displace peasant and indigenous people’s communities along the said river.

“We strongly condemn the killing of Mr. Cabal, an environmental activist who consistently fought for the rights of the community over their water resources,” Clemente Bautista, national coordinator of environmental group Kalikasan People’s Network for the Environment, said in a statement.

Records from the Task Force-Justice for Environmental Defenders revealed that there have been 13 cases of killings of environmental activists under the Aquino administration. Nine of such cases happened in Mindanao, including the murder of tribal leader Jimmy Liguyon and Italian priest Fr. Fausto “Pops” Tentorio.

“Impunity towards ecologists is growing by leaps and bounds in Mindanao, presumably because of the torrent of destructive mining and energy projects in the region. Government policies on protecting foreign investments and engaging in counter-insurgency are overlapping exactly because both are meant to undermine oppositions to these dirty projects,” Bautista said. 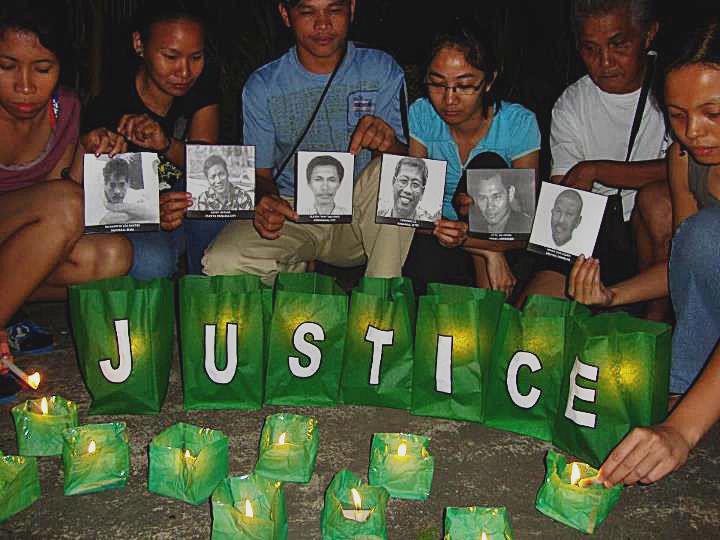 Before Cabal was murdered, state security forces vilified him as a member of the New People’s Army (NPA), the armed wing of the Communist Party of the Philippines.

“This has been the same modus operandi in the killing of other anti-large dam and environmental activists. Peasant leader Jose Doton and indigenous Dumagat leader Nicanor delos Santos were tagged as communist supporters or NPA members before they were killed. In most of these cases of killings, military forces and agents were the suspected perpetrators,” said Bautista.

Doton and delos Santos were known anti-large dam advocates who were assassinated in 2006 and 2001 respectively.

The group also cited the vilification of Sr. Stella Matutina, a Benedictine nun and staunch anti-mining leader who has been tagged by the Philippine Army as a member of the NPA. “This dirty tactic is part and parcel of the harassment, terror and physical elimination of environmental activists who oppose government-supported big business such as large-scale mining and hydro-electric power plants,” Bautista said.

Sr. Matutina is the secretary general of Mindanao-wide environmental alliance Panalipdan (Defend) Mindanao. On May 8, 2012, she filed a complaint with the Commission on Human Rights (CHR) against the 28th and 67th Infantry Battalion of the Philippine Army.

“The increasing number of harassments and killings of environmental activists is a result of intensifying militarization under the anti-insurgency Oplan Bayanihan of the Aquino administration. It is implemented particularly in areas where there is a huge corporate investment to exploit our natural resources, at the same time strongly opposed by advocates and communities. These killings will not stop as long as the Aquino administration pushes through with Oplan Bayanihan and their destructive projects like large-dam and large-scale mining,” Bautista said.

According to documentation by Karapatan, 76 leaders and members of people’s organizations have been victims of extrajudicial killings from July 2010 until May this year.