You Are Here: Home → 2012 → May → 15 → Radio network employees gear for strike against union-busting

The union-busting and illegal dismissals, said the union president, started since they formed a union for the radio network’s Manila operations.

MANILA — Forty-two anchors, reporters and production employees of RMN in Manila are up in arms against the management of DZxl radio station after it dismissed three of their union officers recently. The employees charged that the dismissals are part of management efforts to break up their newly formed union.

Rogas said they filed a notice of strike last May 7. The Department of Labor and Employment (DoLE)-NCR is set to hear their petition on Tuesday, May 15. 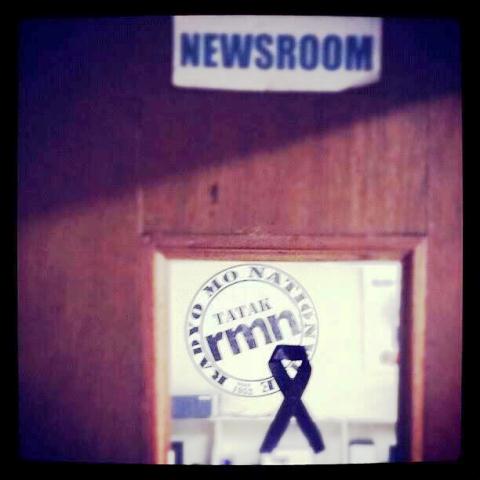 Criticizing RMN management’s “anti-worker and anti-union activities,” Rogas said the union will stage a rally in front of RMN offices in Guadalupe Commercial Complex along EDSA Guadalupe in Makati City on Thursday, May 17. He asked other workers especially their fellow media workers to support their actions.

Canoy of RMN vs employees

Rogas disclosed that the union-busting and illegal dismissals started since they formed a union for the radio network’s Manila operations in November last year.

He shared that last week, the labor department declined to release the Certification of Election of the union after three union members allegedly filed a motion to intervene. They supposedly denied their being union members; they also denied that there had been a union meeting or that Rogas is a regular employee. All these matter for the labor department before it would release the new union’s approved petition for certification of election.

Rogas said they immediately filed a counter-affidavit showing proof that belied the claims of the three employees.

Solis countered by charging the management with illegal dismissal. He won his case at the National Labor Relations Commission April 18, 2011.

RMN has 52 AM and FM stations nationwide. Calling itself the “nationwidest radio network” in the country, it is set to celebrate its 60th anniversary nearly three months from now. It is owned by brothers Eric Canoy (president), Charlie and Butch (vice presidents).

The independent RMN-Manila Employees Union (RMN-MEU) covers only the RMN employees in Manila. Rogas said there is also a union in RMN Davao but both unions are registered under the charter of the National Federation of Labor Union. He told Bulatlat.com that this is the first time they are forming a union.

The National Union of Journalists of the Philippines (NUJP), in a statement, commended the “unity being shown by RMN Manila Employees Union in fighting for better working conditions in the face of the management’s divide-and-rule tactics.”

The NUJP said they support the actions of RMN-MEU. They decry the “alarming pattern of illegal dismissals and union-busting activities of managements of various media outfits in the country.”