The Armed Forces of the Philippines claims that it has not committed a single human rights violation during the year, but human rights and people’s organizations, as well as victims and their relatives in Southern Tagalog say it is even getting worse.

Last May 14, AFP officials were quoted in an article in the Philippine Daily Inquirer saying that the AFP has a clean human rights slate from January to April this year and all other human rights violations cases filed at the Commission on Human Rights (CHR) from July 2010 are mere accusations.

In an article written by Inquirer reporter Dona Pazzibugan, the Armed Forces of the Philippines Human Rights Office (AFPHRO) said, “No soldier has been accused of human rights violations this year.”

In the same report, the AFPHRO said 84 cases of alleged human rights abuses were filed against military personnel at the Commission on Human Rights (CHR) since July 2010 when the Aquino administration took over. All of these complaints, however, were considered by the AFPHRO as “not having a leg to stand on based on its internal investigation.”

“The findings of the BOI revealed that all of the human rights violation cases tagging military personnel were only accusations and did not produce sufficient evidence against soldiers,” Pazzibugan quoted AFPHRO chief Colonel Domingo Tutaan as saying.

The official said the AFP’s clean human rights slate from January to April showed that its advocacy to educate and train soldiers to uphold human rights and international humanitarian law on warfare was working.

“The AFPHRO was very active in teaching soldiers in garrisons and in the field about human rights, international humanitarian law and pertinent laws such as the Anti-Torture Act of 2009 (Republic Act No. 7438) and the rights of arrested or detained persons as well as the duties of arresting, detaining and investigating officers,” he said.
Karapatan-ST secretary-general Glendhyl Malabanan immediately reacted saying that for the AFP to make such a claim was ludicrous.

“The AFP should stop spreading its lies. Currently, there are an estimated eight battalions of the army, police and Civilian Armed Forces Geographical Unit (CAFGU) stationed in 22 towns and 50 barangays in the southern part of Quezon,” she said. She pointed out that a such a high concentration of military forces in rural communities automatically translates to an escalation of human rights violations,” she said. 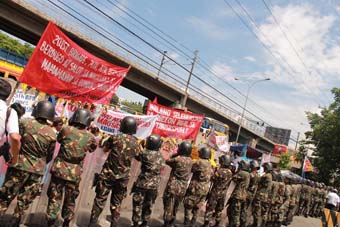 Units deployed in the area include Philippine Army’s 85th, 76th, 74th, 59th Infantry Battalions, 1st Special Forces of the Philippine Army, 201st Brigade, 2nd Infantry Division, CAFGU and 416th Provincial Police Mobile Group. Malabanan said while past administrations also used militarization campaigns in their counterinsurgency programs, the recent deployment in South Quezon is still alarming considering the concentrated number of military relative to the areas where they have been deployed.

Malabanan explained that Quezon, specifically South Quezon and Bondoc Peninsula, can be considered as center of agricultural production where products such as coconut, corn, and grains abound.

“Minerals such as gold and petroleum are also abundant in these areas. Development programs of both the government and private companies which include Bio-diesel in Gumaca, Mirant Powerplant Extension in Atimonan, and dam construction in Macalelon are also concentrated in South Quezon and Bondoc Peninsula. Touted as a ‘Hacienda belt,’ the Bondoc Peninsula, meanwhile, has thousands of farm lands owned by the families of Murray, Soleta, Estrada-Quizon, Tan, Reyes and Matias,” she said.

Malabanan said given the mass potential of the region’s natural resources and the agricultural gains of the provinces, it is no wonder why the government has deployed that much number of military and police to South Quezon and Bondoc Peninsula.

Soldiers on a rampage against civilians

In a recent press conference, farmers from Quezon shared their experiences of military abuse. Malabanan said the AFP has a long record of harassing civilians and accusing them of being members of the New People’s Army (NPA) or its supporters. 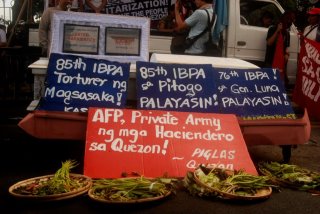 Among the farmers who spoke was Christopher Prieto from Mulanay, Quezon. In his testimony, Prieto said that around 1:00 a.m. on May 9, several armed men came to his house and accused him of hiding a gun. When his wife asked the unwanted visitors who they were, they only answered “Why do you need to know who we are?”

Prieto said that earlier in January, several of his neighbors were taken by soldiers to the military camp and subjected to interrogation and verbal abuse. One was also beaten.

In Catanuan, Quezon, military men disrupted the funeral wake of 17-year-old Manilyn Caribot. Caribot was a resident who was killed during a crossfire between the 85th Infantry Battalion of the Philippine Army (IBPA) and the NPA last April 29.

According to reports, Caribot’s aunt, Genelyn Dichoso, was offered P150,000 by two soldiers for her silence and to desist from filing a case against the military. She declined. One of the men introduced himself as a lieutenant from the 76th IBPA.