On May 5, two army trucks filled with soldiers in full battle gear stationed themselves at the gate of the cemetery where Caribot was to be buried. Without the slightest respect for the dead or the security of the civilians who joined the funeral cortege, the soldiers surrounded the minor’s gravesite.

While all this was happening, soldiers ransacked Dichoso’s house, as well as five others. Witnesses also said the soldiers trained their guns at the children who were left at home while their parents were out.

Mirasol Balaston, a farmer from Macalelon, Quezon, remains hopeful that she will, one of these days, be reunited with her husband Felix. Witnesses said Felix was taken by soldiers to the 85th IBPA camp on March 27, 2011. His wife, Mirasol, is still searching for him up to now.

Karapatan –ST’s Malabanan said there are still many other documented cases wherein elements of the AFP threated, physically assaulted and verbally abused local farmers in the region. 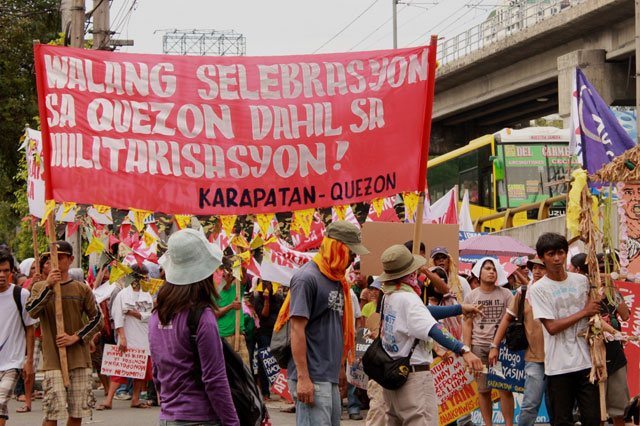 Other such as Dondon Perez, a fisherman from San Andres, Quezon, said soldiers from the 74th IB went to his house, took their food, his boat and fishing implements.

On March 22, 2012, some drunk soldiers from the 74th IB were reported to have manhandled Rey Rodrigo, 16, Reynaldo Delos Santos 18, and Elmer Desuyo in San Andres town. The soldiers were drunk when they accosted and threatened them physically.

“Despite all these, the AFP has the gall to issue denials and dismiss the countless reports of their abuses as empty accusations and mere fabrications,” she said. “Let us not forget that during the Macapagal-Arroyo administration, more than a thousand political activists and human rights advocates fell victim to extrajudicial killings, and hundreds others to enforced disappearance, yet no one was ever convicted. That does not mean that human rights groups, relatives of victims, and the surviving victims of violations were simply spreading accusations.”

“Like its predecessor Oplan Bantay Laya, Oplan Bayanihan is a counterinsurgency program devised to quell all forms of dissent by any means necessary. It blurs the distinction between what is legal and illegal. Ultimately, innocent civilians become prime victims,” she said.

Human rights protests in the NCR

In the meantime, a writer for ST Exposure Christian Ray Buendia documented Karapatan-ST’s version of the Pahiyas festival in Lucban, Quezon. The Pahiyas is a festival traditionally held every May by farmers in gratitude to patron saint Isidro Labrador for their good harvest.

Instead of the traditional festivities, hundreds of farmers and members of various people’s organizations and human rights groups from Southern Tagalog held protests, last March 15, in front of the compound of the Department of National Defense in Quezon City.

“Toting makeshift fiesta banners made of bloodstained camouflage and yellow cloth, with a “defiled” Reyna Elena on the lead, protestors marched to the gate of the DND where they placed a real-life coffin surrounded by placards bearing names of rights abuse victims,” Buendia said.

The protestors then proceeded to the office of the Commission on Human Rights to file charges against the AFP. After the filing, they held a rally in front of the House of Representatives where members of the Philippine National Police (PNP) attempted to disperse the mobilization.

Buendia quoted Peter Gonzales , spokesperson of Task Force Stop Militarization, Save the People of Quezon as saying “The people have nothing to celebrate and everything to mourn, as intensified militarization continue to threaten their lives and livelihood.”

“Farmers are the hardest hit by the havoc wreaked by Oplan Bayanihan. In truth, there will never be neither peace nor development, not even a shadow of it, unless military troops are pulled out from the province,” Gonzales said.

Gonzales said the AFP’s claim of having a pristine human rights record cannot be more farther from the truth.

“The victims who joined in our protests disprove the AFP’s official lie. It might be that the concept of respect for human rights escapes the military. Definitely, this is what they mean by a ‘clean human rights slate’—a zero regard for the same rights they swore to defend,” Gonzales said.

In a statement, the Karapatan-ST said the Benigno Aquino III administration should order the immediate pull out military and police troops deployed in South Quezon.

“While the government proudly banners its counter insurgency program Oplan Bayanihan in the name of ‘peace and development’ and continues to echo its mantra for the ‘respect for human rights,’ farmers, workers, and other members of the basic sectors fighting for their democratic rights experience the most inhumane treatment from state forces. We decry the brutality and manhandling of the military and police forces to the people of Quezon. It is unacceptable how those who have sworn to protect the interests of and defend the people are the same ones sowing fear and terror among them,” it said.