When the collective bargaining negotiations reached an impasse on the issue of wage increases, the management isolated the union president, withheld union dues, and initiated punitive action against the workers who attended the recent May 1 rally.

MANILA – In the Aboitiz-owned electric company supplying electricity to a greater part of Cebu in the Visayas, unionists are being punished for having joined the May 1 Labor Day rally, for having posted union updates in Facebook and in general, for having asked for a wage hike.

Punishments so far included revoking the union’s registration, compelling its members to delist the union president from its roster and to deactivate the union’s Facebook account. The company has also placed the May Day protesters under “administrative investigation,” following the sacking of the union president for having spoken at an earlier May 1 rally.

In addition, the management has also “sentenced” the acting union president (the vice-president) to work at the electric company’s poleyard, an area the union describes as “very isolated, with no basic amenities such as water” in front of a reclamation area. The transfer effectively cuts off the acting president from union members.

The 252-strong union represented by electrical engineers and professionals has recently filed a notice of strike over unfair labor practices including union-busting. They also protest the interference on union affairs by the management of Visayan Electric Company. VECO employs nearly 900 employees counting those under contractual employment arrangement. Jaime Jose Y. Aboitiz is its Chief Operating Officer and Senior Vice President. 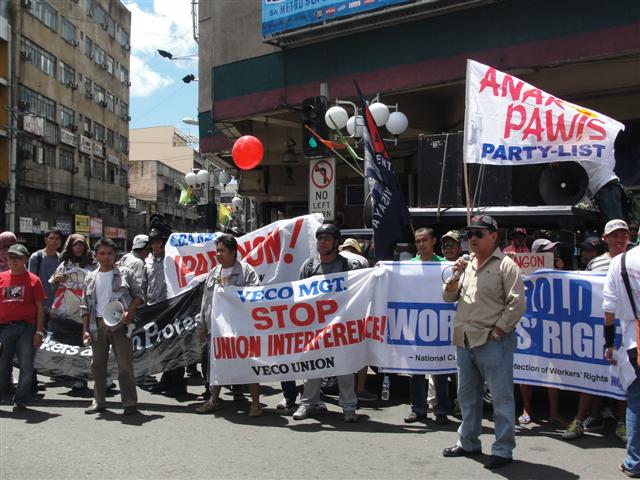 VECO employees at a May Day rally in Cebu (Photo by Richie Gomez / bulatlat.com)

“It was only on the last CBA item (salary increase) when both parties reached an impasse that the management began blaming the union president Casmero A. Mahilum,” the union said.

VECO has already fired Mahilum, who is currently contesting the alleged illegal dismissal. The union said that until the final resolution in court of Mahilum’s case, he is still part of the union, and he constitutes one vote in its decision-making board of directors. (Note: Mahilum was fired in late 2010 allegedly for speaking against the VECO management in a May Day rally in 2009.)

The total accumulated income from 2008 to 2011 of the Visayan Electric Company (VECO) is more than P1.4 billion ($32.2m), based on company financial statements submitted to the Securities and Exchange Commission, a union leader told Bulatlat.com.

This declared profit, the union explained, is smaller than it actually is. Citing studies of labor rights advocates such as the Center for Trade Union and Human Rights (CTUHR), the union claims VECO has earned profits of at least P11 billion ($253m) in the same period. Also, the union estimates that the “accumulated net income will certainly increase if 2011 net income is reported to the SEC.”

The union represented by electrical engineers and professionals is proposing a total CBA package for three years of P87 million ($2-million). The union’s basis is the more than P1.4-billion ($32.2m) accumulated net income of VECO from 2008 to 2010. The union said that even if they disregarded their estimates that VECO has profited more than P11-billion ($253m) in years 2008 to 2010, their proposed CBA package would still leave the Aboitiz a sizeable share of profit. 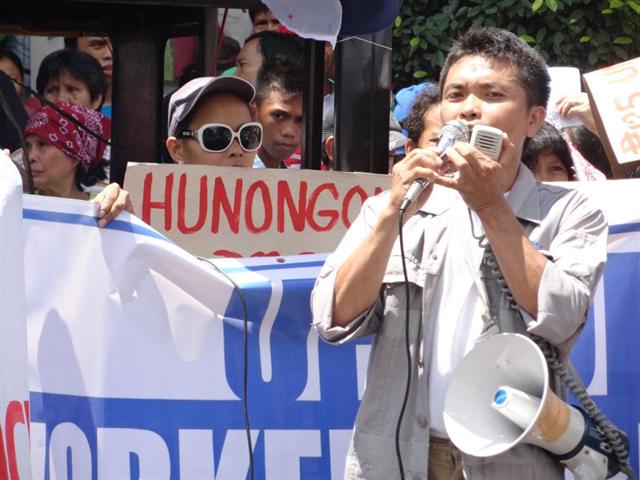 But the VECO management would not have that. Although it had voluntarily recognized the union last December 20, after it disaffiliated from the government-backed Trade Union Congress of the Philippines’ federation ALU during the prescribed freedom period, the VECO management now questions the said union.

But now that the same union is demanding a wage increase the VECO management is responding with punitive actions. It recently stopped remitting the union members’ union dues, thus cutting off the union’s source of financing just when it is in a fight for higher wages.

VECO has also been reportedly meeting with union members either individually or in groups, “coercing union members to sign a document denouncing the union president, Casmero Mahilum, and asking them to agree to a salary increase solely determined by the management,” the union said. 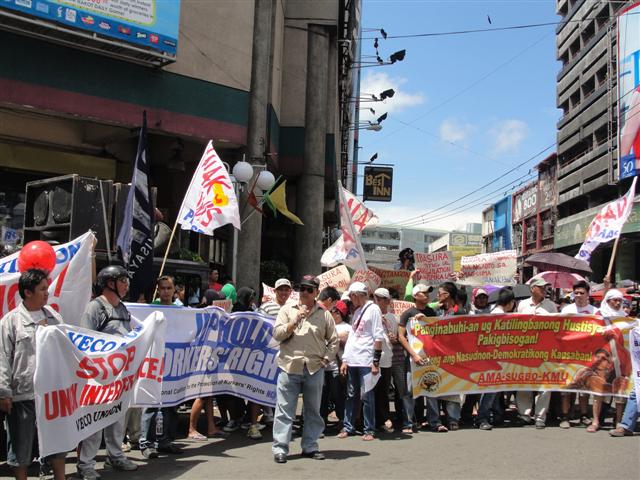 VECO reportedly offered less than half of the union’s demanded three-year CBA package. It also proposed to diminish the employees’ existing benefits through changing the names of the 13th and 14th month pay, among others, to comply with “Aboitiz standard.”

“Does the VECO management want that Union officers should always agree to its proposal even if unacceptable to the Union?” Mahilum asked.

After the union filed a notice of strike, citing VECO’s unfair labor practices and blatant interference in union affairs, the management countered with threats that the said strike would be deemed as “illegal.”

Illegal strikes could render its participants vulnerable to summary layoff, aside from violent strike-breaking by the deputized police. On June 8 the union would face the management lawyers again in a conciliation meeting called for by the labor department. Conciliation meetings are part of the labor department’s array of processes for averting an impending strike. Another one is the much criticized assumption of jurisdiction, which only the labor secretary or President Aquino could issue.

The union vowed to step up protest actions in the coming days before it conducts a strike vote.