As EPIRA proves an utter failure on its 11th year, groups urge Aquino to scrap it

MANILA – This month, Filipino consumers are being asked yet again to cope with increased electricity rates, spurring protests and renewed calls to scrap the Electric Power Industry Reform Act or EPIRA. The law is being blamed for having allowed electricity rates to increase so much.

The Manila Electric Company (Meralco), the country’s biggest electricity distributor, recently announced it will hike its rates starting June. Citing a 54-centavo increase in generation charges, Meralco has proposed to recoup this via the generation rate adjustment mechanism (GRAM), which it could increase automatically under the Electric Power Industry Reform Act (EPIRA).

Given that electricity in the Philippines is already the highest in Asia, higher than high-income Japan, public opposition to EPIRA has been mounting. Business groups, large and small, have also complained of the rates, with some multinational companies relocating in other countries reportedly because of high electricity rates. 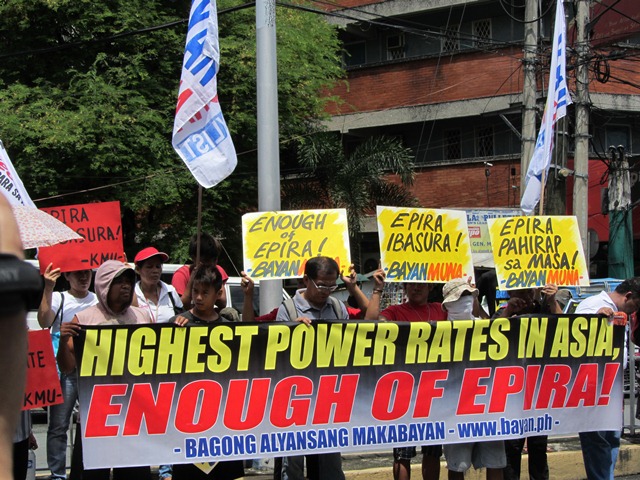 Progressive groups ask Aquino why he has not yet called for the reversal of GMA’s first law, EPIRA. (Photo by Marya Salamat / bulatlat.com)

Progressive groups and consumers have questioned the continued implementation of EPIRA as its promised lower electricity rates “proved a sham from the beginning,” the KMU said in a statement.

Last year, the multi-sectoral alliance Bayan (New Patriotic Alliance) submitted to Congress its review of EPIRA. The group has been urging lawmakers to conduct its own review of the said law, in hopes Congress could see the need to scrap it altogether.

For a government whose head garnered votes due to promises of being a change from the former administration of Gloria Macapagal-Arroyo, Aquino has not yet lifted a finger on EPIRA. The said law was the first passed under the presidency of Arroyo. From the start, progressive groups have warned against the deregulation and privatization detailed in EPIRA, saying profit motivations could hardly result in lower-priced electricity.

“The price of electricity has doubled since EPIRA was implemented. Until now, we consumers are still paying even for the PPA (Purchased Power Adjustment),” Renato Reyes Jr., secretary general of Bayan, told the media at the sidelines of the protest rally at Mendiola last Friday. PPA is the cost of contracted supply of electricity which consumers pay whether or not the electricity was actually consumed or not. It is another hallmark of EPIRA.

Under privatization and deregulation in the power sector through EPIRA, “the consistent priority is profit and not service,” said Reyes. He said the current power crisis in Mindanao is another example why privatization is bad for consumers of electricity. He blamed the electric companies for waiting for rates to increase in the island before they provide electricity.

EPIRA had also failed to promote competition. “Only three families today control the business of providing electricity in the Philippines,” said Reyes. 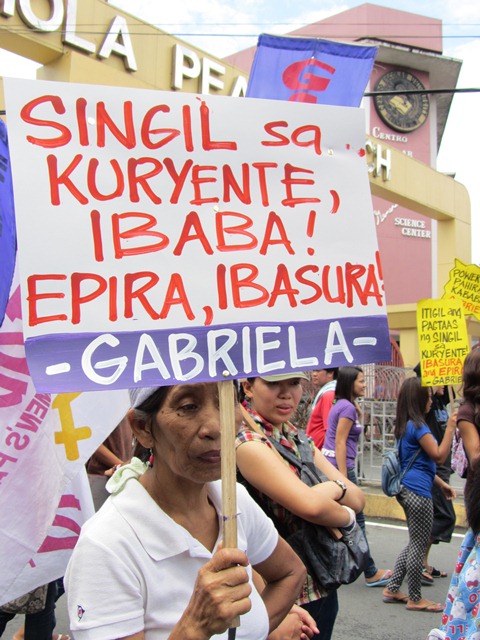 Women decry the increasingly high cost of electricity in the Philippines. (Photo by Marya Salamat / bulatlat.com)

Since 2001 when EPIRA was enacted, “there have been a steady increase in electric rates and a constant decline in the power industry’s quality of service,” Joms Salvador, deputy secretary general of women’s alliance Gabriela, said during the rally. Worse, according to Gabriela in a statement, “recent developments in the power industry essentially condition consumers to handle yet another increase in the already high power rates in the country.”

Gabriela cited the impending P14-billion settlement of a 10-year dispute over a supply contract between Meralco and the National Power Corporation. They warned that it is leading to an increase of P0.12/kwh. The Philippine Independent Power Producers Association also warned of higher power rates following a proposal to withdraw government tax incentives to industry players.

Protesters challenged President Benigno “Noynoy” Aquino III to listen, and act with haste, on the “widespread clamor to immediately address the high cost of electricity in the country.

“Aquino must act on the problem of ordinary workers whose meager daily wage is being siphoned off by Meralco and other power companies,” Labog said. He dared Aquino to act now because if he did not, he would only reveal himself as “an Arroyo clone whose sole purpose is to continue the foreign-dictated neoliberal economics of his predecessor.”

The neoliberal policies implemented by Arroyo and being continued by Aquino, as seen by workers and toiling masses, only “paved the way for unbridled plunder by foreign businesses in strategic industries,” said Labog. From the start, the labor group had said that “EPIRA only legalizes plunder by allowing power corporations to rake in profits at the expense of poor Filipinos.

It has been a year now since Bayan submitted to Congress its review of EPIRA. “But the House Committee on Energy is sleeping on it,” Reyes of Bayan told reporters. He asked the public to support and join moves against EPIRA because the Aquino government, “based on its inaction and the behavior of its followers in Congress, do not seem to consider as priority the issue of helping the people in lowering their electricity rates.”