“Our members are either facing or losing agrarian cases but we continue to struggle for our rights to the land we till.” – Alyansa ng Magbubukid sa Gitnang Luson

MANILA – Farmers and agricultural workers from different parts of the country branded the government’s agrarian reform program as an “epic failure.”

Marking the 24th anniversary of the Comprehensive Agrarian Reform Program (CARP), more than 2,000 farmers and supporters led by the Kilusang Magbubukid ng Pilipinas (KMP) marched to the foot of Chino Roces (formerly Mendiola) bridge, a few meters away from Malacañang, June 12.

“There is no genuine independence when the Filipino peasantry are still locked in feudal bondage,” KMP deputy secretary general Willy Marbella said. The day coincided with the 114th Independence Day. According to KMP, seven out of ten farmers remain landless.

The case of Hacienda Luisita, a vast sugar estate controlled by President Benigno Aquino III and family for nearly half a century, is a testament to the failure of CARP, according to KMP.

In 1989, the stock distribution option (SDO), one of the non-land transfer schemes under CARP, was implemented in Hacienda Luisita. Instead of land to till, farm workers were given shares of stocks. Years later, however, the SDO scheme further impoverished the farm workers and compelled them to stage a strike in November 2004 that led to the massacre of seven individuals.

To this day, despite the Supreme Court decision ordering the distribution of the land to the farmworker-beneficiaries, Rodel Mesa, secretary general of Unyon ng mga Manggagawa sa Agrikultura (Uma), said, the Cojuangco-Aquinos “never run out of schemes to delay and frustrate land distribution.”

Passed in 1988, the CARP has been extended twice, because it failed to reach its target for land distribution. For the second extension, the Comprehensive Agrarian Reform Program Extension with Reforms (CARPer) or Republic Act 9700 was enacted.

CARP in other areas 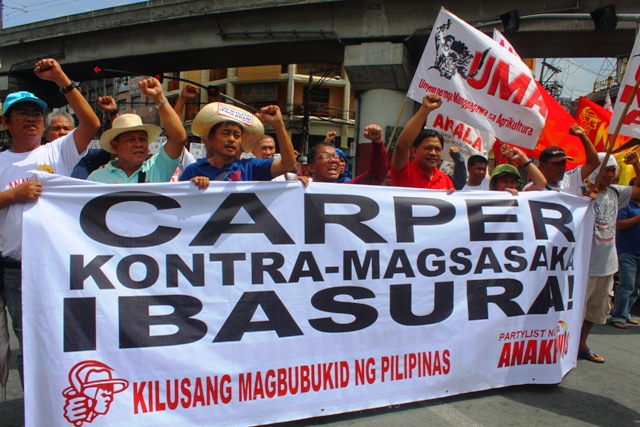 “Our members are either facing or losing agrarian cases but we continue to struggle for our rights to the land we till. CARPer is practically protecting and promoting the abuses of landlords and speculators,” Joseph Canlas, AMGL chairman, said.

The AMGL cited the cases of farmers at the Fort Magsaysay Military Reservation in Laur, Nueva Ecija and farmers affected by various government projects such as the Central Luzon Expressway, Tarlac-Pangasinan-La Union Expressway, Aurora Pacific Economic Zone and Freeport (Apeco) project, among others.

According to the Katipunan ng mga Samahang Magbubukid sa Timog Katagalugan (Kasama-TK), more than 200,000 hectares of land remain undistributed in Southern Tagalog. Among the, haciendas that have remained out of CARPer coverage are the Hacienda Looc in Nasugbu, Batangas and Hacienda Yulo in Calamba, Laguna.

“After 24 years, CARP has failed to free farmers from feudal bondage that has enslaved them for hundreds of years. With all the haciendas still intact in the region, it’s like the Spanish era in Southern Tagalog,” Axel Pinpin, Kasama-TK secretary general, said.

In Negros island, meanwhile, the SDO scheme and corporative joint venture under CARP resulted in the “re-concentration of land to the landlords.” 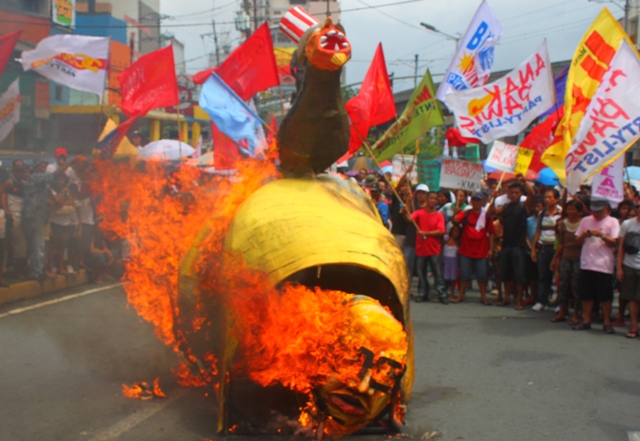 A study by the National Federation of Sugar Workers (NFSW) revealed that 41 percent of agrarian reform beneficiaries from the ranks of sugar workers lost the land supposedly awarded to them due to the SDO and other non-land transfer schemes. NFSW said Eduardo Cojuangco Jr., the president’s uncle, managed to expand his landholdings by more than 5,000 hectares because of CARP.

Citing data from the Sugar Regulatory Commission, Uma said 264,464 hectares of land are covered by CARP in Negros island, but 41 percent of agrarian reform beneficiaries are no longer in possession of the land awarded to them.

From Chino Roces bridge, the protesters marched toward the US Embassy but were blocked by truncheon-wielding policemen along Kalaw avenue.

Under CARP, multinational corporations are allowed to maintain their control and operation of vast tracts of agricultural lands through lease, management, grower or service contracts for a period of 25 years and renewable for another 25 years. This provision, retained under CARPer, allowed transnational corporations such as Dole and Del Monte to control 220,000 hectares of agricultural lands devoted for export crops.

The farmers burned a giant effigy of Aquino as “golden kuhol”. The golden kuhol or golden apple snail, which was introduced in the Philippines in 1983, became one of the major pest problems in rice production.

“For us, P-Noy stands for Pesteng Noy, Parasite Noy and Puppet Noy. The haciendero president is the biggest pest to the Filipino peasantry,” Marbella said.