MANILA – The appointment of Carlos Cao, Jr. as chief administrator of the Philippine Overseas Employment Administration (POEA), January last year, could have been the start of reforms in the agency. According to Migrante International, Cao has been, so far, the “most accessible, open-minded and sincere among POEA chiefs.”

“When he assumed office, he immediately conducted consultations with us to learn about our needs and demands. He was clearly still new to the job but we appreciated his sincerity and good intentions for OFWs,” said Garry Martinez, Migrante International chairman.

However ,last January 2, Cao was replaced by former Labor undersecretary Hans Cacdac. News reports said Cao did not receive any official word from the Office of the President, which appointed him to the post, that he would be removed or would be replaced. It was the higher-ups from the Department of Labor and Employment (Dole) who informed him.

He said he has no idea about the reasons behind his ouster. “I don’t know why they removed me from my post. There has been no issue of corruption, no scandal. In my personal view, I was able to manage the process flaws in the agency. I can’t understand why I was replaced,” Cao said in a forum held last June 11 conducted by Migrante International. Cao was invited as a reactor in the “Summing-up of the State of Migrants Under Aquino” held at the University of the Philippines. 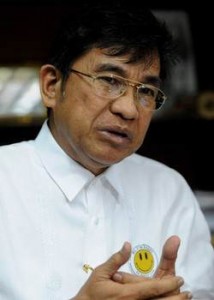 According to Cao, he was the first administrator from the private sector to serve in the POEA. He was chosen by Aquino from a list submitted by the search committee. “I don’t know the president personally, not even Dole Sec. (Rosalinda) Baldoz.” Cao worked as chief legal counsel and head of the Human Resources Department of Mitsubishi Motors Philippines Corporation for 19 years and is now serving as Senior Vice President and Special Assistant to the Chairman of the State Group of Companies.

“I have a special burden for OFWs for the longest time. I have neighbors who are working abroad, two of my siblings are also OFWs and my brother-in-law is also a seafarer. So maybe God agreed to put me in POEA,” Cao said in the forum.

He said he may not be an expert on migration but his heart is with OFWs, who are called as “modern day heroes.” In his short stint in the POEA, Martinez said, “the agency united and fought with the migrant sector against budget cuts and for higher state subsidy for direct services for OFWs.”

What Cao discovered when he entered public service is the measly budget that national government allots to the agency. “Before I was appointed as administrator of POEA, I personally went to the office, together with my wife, to see the situation. It was then that I learned that the POEA’s lobby (where thousands of applicants are received) was not even air-conditioned. I then learned that the budget for the agency is just not enough. Only P157 million ($3.6 million) is allocated for personnel salaries, etc., only P127 million ($2.9 million) for maintenance and other operating expenses and P26 million ($619,407) for capital outlay.”

He said the system is not even computerized. The only computerized system is the e-submit program, the electronic submission of contract details, which has been in place since 2003.

Having been in the private sector for a long time, it was quite a shock for Cao to learn about the dismal state of the agency. He said the budget for the agency is too small to serve the so called “modern day heroes” and its employees, as well. That is why when he received his first month’s salary, he donated air condition units to the name hire department of POEA. He also tapped Mitsubishi Motors to donate 12 heavy duty 7.5 tonner air-condition units, which were installed at the POEA lobby.

During Cao’s one year term, LED TV sets, water dispensers and more air condition units were donated by the private sector that he also tapped. Two additional elevators and sensory gates were also installed during his term. He said more were forthcoming when he was removed. Before he left, he once again donated aircon units, but, he said, these have not yet been installed since January 3. “I don’t know why; maybe don’t want to credit me for that.”

Cao had a notable record in servicing migrant workers, as he was able to cancel permits of nearly 300 recruitment agencies on grounds of labor abuses and non-compliance to POEA rules and guidelines.

During his term, he converted the office of the administrator into a virtual public assistance center where OFWs can walk in and seek redress for their grievances. Migrante International and other groups, as well as the media, went to his office with victims.

“Before the admin office’s doors were closed. Me, I am transparent. The OFWs who are walking in and lining up in my office were given attention and within that very same day, we are able to resolve cases.” Citing one example, OFWs were able to get their claims in full.

He also put a Citizen’s Watch Against Illegal Recruitment and Human Trafficking Desk where he mobilized law student interns to give their free legal assistance to OFWs. “I engaged the Philippine Association of Law Schools headed by Dean Amado Valdez of the University of the East to enter into a memorandum of commitment and patriotism, wherein five law schools were mobilized to train law students specifically on anti-human trafficking cases.”

Migrante International was also able to set-up a petition-signing booth at the POEA.

He also made recommendations to the government to ratify the International Labor Organization’s (ILO) Maritime Labor Convention of 2006 that provides comprehensive rights and protection at work for seafarers around the world. According to the International Seafarers Action Center (ISAC), the Philippines has not ratified the said convention up to now.

“I read the Convention and I agree to its provisions, so I made recommendation to ratify it. However, they told me that I am not an expert and I am not the lead person to make such recommendations.”

He said that even if he is not an expert in migration, he is learning. “I did my best for one year,” he said.

‘Cao’s removal has something to do with politics’

Cao said in the forum in front of OFWs who came to listen that even if he’s not with the POEA he would often visit the citizen’s watch desk that he initiated.

“It maybe coincidental but we (State Group of Companies) are about to move from Binondo in Manila to Ortigas, near the POEA building. So I assure you that I will pursue the cases that we have started to work on,” Cao said to the audience.

He said that when he was appointed as POEA administrator, he wanted to contribute to building President Benigno “Noynoy” S. Aquino III’s “righteous path.” However, when he started building the righteous path, he was axed.

But despite that, the pastor and lawyer said he has no rancor against the president. “I still believe in his (Aquino) administration. I blame the higher ups in Dole; it’s their power game that led to my ouster.”

He added that serving overseas Filipino workers for such a short time is the happiest, yet challenging chapter of his life as a lawyer and a public servant.