Migrante-Middle East said they receive reports of OFWs who died under questionable and vague circumstances on an average of two cases every month.

MANILA – Another victim of a mysterious death while overseas, 22 year old Romelyn Eroy Ibanez’s body arrived home, with her left eye, tongue, brain, heart and internal organs missing, from Saudi Arabia on August 24, 2011 – almost a year after she died on September 2, 2010.

Romelyn was from North Cotabato. She was hired by the Solid Works Manpower Agency in Cotabato, it was stated in her contract that she would work as nursing aid for Wafa Al Harkaan and Dr. Sulta Al Otaibi Medical Polyclinic Co.. However she ended up as a domestic helper to an employer named Musfer Yahya Musfer Al-Abbas.

According to the death certificate, the cause of Romelyn’s death was suicide. An autopsy report issued by the Ministry of Health in Saudi Arabia claimed that the cause of her death was “poisoning resulting from drinking Clorox acid resulting to complications.”

The Ministry’s findings contradicted the forensic exam made by a certain Dr. Mayma, which revealed that she sustained stab wounds and several cigarette burns. Dr. Mayma said in his report that “it is impossible for the subject OFW to commit suicide inflicting on herself several stab wounds and at the same time taking in acid.” 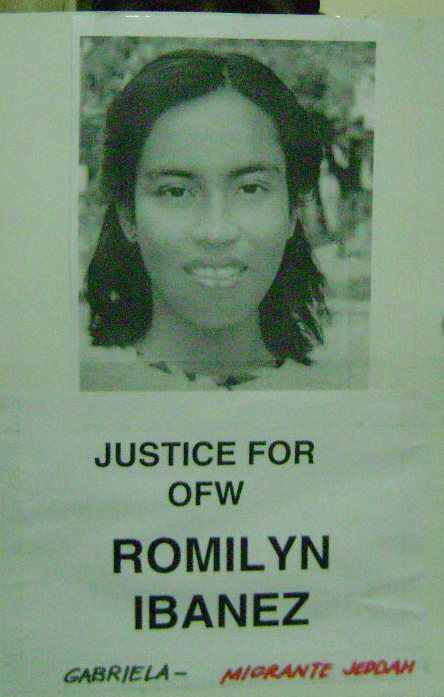 Two years after Romelyn’s death, her family still cries out for justice. Her sister Mira wrote Migrante – Middle East asking for an update on her sister’s case. She said she already asked the Overseas Workers Welfare Administration (OWWA) in North Cotabato and the Department of Foreign Affairs (DFA) regional office but was not able to get any update on her sister’s case.

“We would want to know what happened to the reinvestigation of my sister’s case,” Mira wrote in her email to John Leonard Monterna, Migrante—Middle East regional coordinator.

“We went to OWWA to ask them (for an update) but they can’t give us any information. They have many files on my sister’s case but whenever I am there they cannot give me any explanation why they don’t have any update on my sister’s case,” she added.

Monterona lambasted the inaction of the government. “I was shocked and disgusted upon reading the email of Mira informing me that the OWWA in North Cotabato and the DFA regional office could not give an update on the reinvestigation,” said Monterona.

In November 2010, Monterona said, an official of the Philippine Embassy in Riyadh confirmed that they filed a case seeking to reinvestigate the death of Romelyn. The same was conveyed to the Ibanez family months before her body was repatriated.

“Maybe they (Philippine embassy in Riyadh) are not following up the case,” Monterona said.

According to the factsheet provided to Bulatlat.com, Romelyn went to Saudi Arabia last June 10, 2010. On September 7, 2010, three months after she departed from the Philippines, Mira received a call from her sister telling her that she would be going home soon. “She called about 9:00 a.m. and she told me that she would go home and she would sign her papers the next day. She said she was tired and she didn’t like her job anymore.”

Two days later, on September 9, 2010, the Ibanez family received a letter from the Philippine Overseas Labor Office-Overseas workers Welfare Administration (POLO-OWWA) informing them of Romelyn’s death. Her body was repatriated after almost one year without any explanation why it took that long.

Romelyn’s body was desecrated; aside from missing an eye and other organs, her stomach was empty and was stuffed with cotton. There is a stitch from her forehead surrounding the entire head, a long stitch from the upper part of her breast up to her genitals and another stitch from her nose up to her eyebrow. Mira said they suspect that Ibanez was raped before she was murdered.

“Upon seeing my sister’s body, my cousin told us that someone called her after the incident happened. A woman introduced herself as Romelyn’s co-worker. She got my cousin’s number after Romelyn used her cellphone to call us,” Mira said in the factsheet.

Ibanez’s co-worker communicated to their cousin after four months and told them what happened.

According to the co-worker who did not disclose her name out of fear, she arrived first and worked with employer named Nora Mahdi Muhmil Al-Abbas. She said her employer offered to buy her eye to give to her child who has a problem in his eye. She did not agree to her employer’s proposal and was detained in her employer’s house since then. She noticed that their employer became nice to Romelyn. One day she heard Romelyn pleading and crying for help. It took hours before the whole house went silent. When she peeked through the window of her room, she saw two of her employer’s nephews going down from the second floor. When she was sure that there was no one in the house she destroyed the lock of the room where she was detained. When she got out of the room she looked for Romelyn. She saw the victim in the kitchen with a knife stabbed in her shoulder. She sustained many stab wounds and was almost dying.

Romelyn’s co-worker took her outside of the house and called a taxi being driven, coincidentally, by a Filipino. She pleaded for help and asked the driver to bring Romelyn to the hospital.

The co-worker told her cousin to check if Romelyn still had her eye because their employer once had an interest in her eye before the incident happened. They (employer) wanted to buy Romelyn’s eyes but she also disagreed.