“Ever since he [Aquino] came to power, the education crisis has only worsened.” – National Union of Students of the Philippines

MANILA – There is no bright future for the youth under the administration of Benigno S. Aquino III. The youth groups said that under the present administration the number of out-of-school youths rose at an unprecedented level of around 80 percent.

“Aquino came into power promising change, but the only change that’s happened is that days are darker for the youth and students,” said Isabelle Baguisi, secretary general of National Union of Student of the Philippines (NUSP).

Students have once again walked out from their classes to show their dissent against the continuing increase in tuition and other fees as a result of budget cuts, the implementation of the K to 12 program and campus repression. They said the education crisis has worsened in just the two years of Aquino’s presidency.

“Ever since he came to power, the education crisis has only worsened. Tertiary education has suffered from continued budget cuts while public and private schools keep on increasing tuition and miscellaneous fees. The K to 12 program has also aggravated the education crisis by stretching the already stretched resources,” Baguisi added.

Several youths from different colleges and universities, as well as high school students marched to Chino Roces Bridge (former Mendiola Bridge) last July 13 as build up to the big rally on Aquino’s State of the Nation Address (Sona) on July 23.

Budget cuts on education and the government’s push for state universities and colleges to raise their own funds have pushed state-run tertiary schools to increase tuition and other school fees.
According to the data of the NUSP, PUP and MSU have increased their tuition and miscellaneous fees. In PUP, the miscellaneous fee will increase to P450 ($10.46). From P85 ($1.97) per semester, MSU increased its tuition to P50 ($1.19) per unit. Twelve state universities and colleges in the Cordillera region proposed an increase in tuition by 300 percent.

In UP, while before majority of the students pay tuition amounting to P1,000 ($23) per unit, now, majority pays P1,500 ($34) per unit unless the student requests for the lower tuition and submits proof of his or her parents’ income. “When Aquino became president the tuition in UP is around P18,000 ($418) per semester. In his second year, students have to pay P27,000 ($627) per semester,” Anton Dulce of progressive youth group Anakbayan said.

Cleve Arguelles, student regent of UP said the university will implement a large lecture class policy in the whole UP system. “About 100 to 200 students will be put into one class; what would we learn in that kind of situation? It is enraging that we are paying the high cost of education despite UP being a state university because the government no longer wants to subsidize the scholars of the nation.”

Meanwhile, about 500 high school students of the UP Integrated School will be moved out from its present location in Katipunan Ave. as Ayala Land Inc. will construct a UP Town Center in its 7.4 hectare land. According to news report, restaurants, cinema, university bookstore, ampitheater and a supermarket will be built in the UP Town Center. The UP Town Center is the second project of Ayala Land in UP, the first is UP-AyalaLand TechnoHub along Commonwealth Ave.

“The government said that these are idle assets and UP has to utilize it to generate income. These idle assets are a result of the budget cuts because these are facilities that the students can use. But because the government does not prioritize education, state universities and colleges will have to find ways to earn funds. Clearly, Aquino is destroying not only our university but our education as well,” Arguelles said.

On the other hand, the Eulogio “Amang” Rodriguez Institute of Science and Technology (Earist) has increased its miscellaneous fee to incoming freshmen students to P1,500 ($34). “The school administration said the money will be used to construct a building because the University of Manila will now use the said building that our school is presently occupying,” Philip Bautista of Earist said. 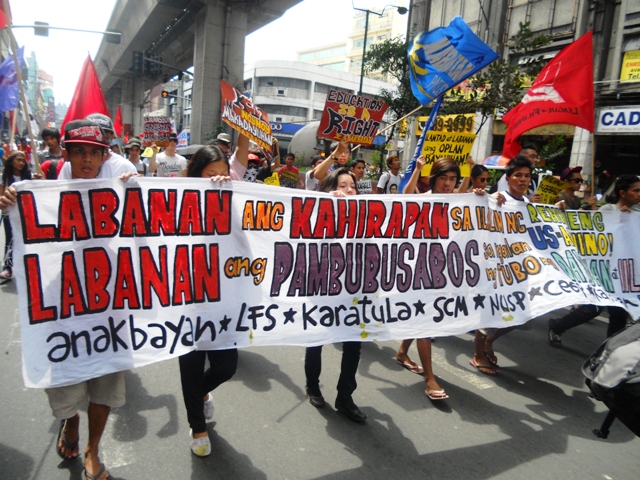 Earist is adjacent to the University of Manila (UM), one building occupied by Earist is UM’s property. Bautista said the UM is about to occupy the said property and now they have to move out. “Why would freshmen students pay for the construction of the building?” Bautista said.

The UP College of Pharmacy now charge students who have Saturday classes, said Regina Decangchon convener of UP Kilos Na. The course BA Philippine Arts, said Decangchon, will be abolished because it is not in demand in the market. “The Philippine Accrediting association of Schools, Colleges and Universities (PAASCU) is inspecting UP’s college departments one by one for privatization to ‘upgrade’ the university’s facilities.”

“Education is becoming a commodity. We students are the consumers and the expensive tuition fee is the price tag,” said Sheryl Alapad deputy secretary general of NUSP.

She added that it has been a policy of colleges and universities to put a price to everything, from miscellaneous fees, physical education fee, athletic fee, ID fee, laboratory fee, internet fee, among others.