According to the Criminal Investigation and Detection Unit (CIDU) of the QCPD, Capellan, along with some leaders who organized the rally last Monday, will be charged with malicious mischief, physical injuries and damage to properties.

“We have all the legal grounds to march to Congress. What was illegal that day were the police barricades, the violent dispersal of our ranks, and the arrest and continued detention of our fellow activist,” Quiza said.

Bayan filed an application for a rally permit with the Quezon City Government ten days before President Benigno Aquino III delivered his third State of the Nation Address (SONA), but the local government did not act upon the petition. Under Batas Pambansa 880, an application is deemed granted if not acted upon within two days.

“What was supposedly a peaceful assembly ended up in violence because of the government’s violation of its own law. The policemen should know the laws they implement, our march was legitimate and their blockade was not. They should free our fellow activist at once,” Quiza said.

Bayan said the ground commander was lying when he said that they had not received any permit because they knew fully well that Bayan complied with the legal requirements. 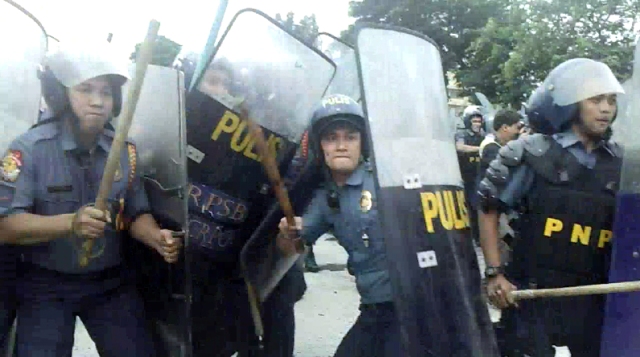 Policemen aim their truncheons at protesters.(Photo by Fred Dabu/ Bulatlat.com)

A scuffle ensued as policemen attempted to block the protesters from marching toward Batasang Pambansa while Aquino was delivering his speech. Dump trucks hired by the Metro Manila Development Authority (MMDA) tried to run over some protesters.

Bayan said the protesters acted in self-defense when they stopped the rampaging dump truck. The protesters almost got hit by the truck and the police were just looking. “The police actions and inaction that day further added to the frustration and anger of the protesters,” Bayan said in a statement.

The policemen assaulted the protesters with clubs and truncheons, leaving 95 injured and 21 hospitalized.

Among those hurt were 12 priests, nuns and clergy belonging to the Promotion of Church People’s Response (PCPR), including Bishop Solito Toquero of the United Methodist Church, Fr. Rennie delos Santos of the Iglesia Filipina Independiente and Nardy Sabino, PCPR secretary general.

Sabino got 23 beatings from truncheons and shield while helping another protester who was also hit by the riot police. He had contusions on his back, arms, and head. Fr. Rennie Delos Santos had a superficial lacerated wound on his head. Doctors said Sabino and Delos Santos have to be given medical attention for seven days and 19 days, respectively, if no complication develops, otherwise this will vary accordingly. Other church people received beatings on their shoulders, legs, arms, hands, back, and forearms. Some were hit by stones thrown from the side of the police, the PCPR said.

“This kind of violent scene was reminiscent of Gloria Macapagal Arroyo’s violent dispersals. It has shown the truth that this president is no different from his corrupt predecessor. Truly, from his SONA speech filled with lies and fake statistics to the exaggerated security force he mustered on the streets, nothing has changed under Aquino,” Anakbayan NCR chairman Mark Louie Aquino said.

In another statement, Anakbayan-USA slammed the use of what it called “overkill force” against the protesters. Six thousand police officers and 400 soldiers were deployed around Batasang Pambansa. Some members of the youth group participated in the protest last Monday.

The PCPR maintained that the protesters were merely asserting their right to be heard by the government that has long been deaf to the issues of the people. “The July 23 violence only unmasks the true face of a so-called pro-democracy administration. When the people asserts their right, the state repression shows how the government utilizes all resources to muffle, trample or prevent the people to exercise fully their democratic rights.”

Anakbayan-USA said “Aquino should know that repression only breeds more resistance and struggle.”

“No truncheons or shields can deter the people in exposing the real state of the nation. We are sure that the people’s movement will only grow bigger and the struggle stronger. We call on the Filipino youth here in the US to organize, take action and expose the Aquino administration, as a violator of human rights, in disguise. Let us intensify our struggle to defend human rights and towards a society that upholds the universal and inalienable rights of the people,” the group said.