Dagok blocked the backhoe operator’s view as she finds this the only way she could stop the machine from gnashing its teeth on the land — the land where they have lived and tilled for years; the land they call home in Bariquit Compound, Purok 13, Bugac in Maa village.

DAVAO CITY, Philippines — “I will not go down,” Mercy Dagok shouted as the police tried to pry her loose from the iron handles of the backhoe operator’s station.

Dagok blocked the backhoe operator’s view as she finds this the only way she could stop the machine from gnashing its teeth on the land — the land where they have lived and tilled for years; the land they call home in Bariquit Compound, Purok 13, Bugac in Maa village.

This was the scene last Tuesday as Filinvest Land Inc. attempted to fence off the land to pave way for the construction of Le Jardin, a high-end subdivision owned by the Villa Abrilles, one of Davao City’s old rich families.

Norman Emano, Filinvest’s operations manager claimed that he had on hand a fencing permit. 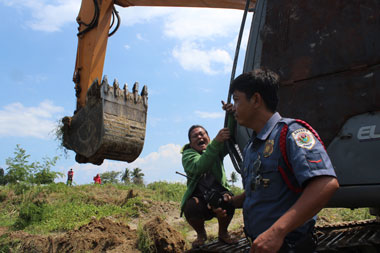 A resident of Bugac in Maa, Davao City cries as she tries to stop the fencing operation of Filinvest Land Inc., Tuesday. The operation is part of the Villa Abrilles’ development of Le Jardin, a high-end subdivision which will displace 28 families. (Photo by Medel V. Hernani / Davao Today)

But as far as residents of Bariquit compound were concerned, the fencing permit obtained by the Villa Abrilles was questionable pending a status quo rule of the court over the case.

The piece of land being claimed by the Villa Abrilles has a size of 20 hectares, where 28 families have resided, some of them, like Marcela Camumot, aged 71, have lived in the area for 65 years now.

While Dagok clung to the iron bars, Camumot brought reinforcement.

“This is just a ploy to cause distress and to force us to leave our property. But we will not cower,” Camumot said as she led her fellow residents to form a human barricade to surround the backhoe, while the rest stood guard, even amidst threats of arrest from the police.

“The Villa Abrilles are prohibited from doing anything until the case is resolved in court,” insisted Antonia Bariquit, also one of the families living in the area.

The residents stood their ground. They showed their legal documents to the police which made them prevail over the management to stop their operation.

“Both have papers so we can’t say who is right. It is up to the court to decide,” Police Senior Inspector Glen Alegado of the Talomo Police Station, one of the authorities who were at the incident explained to reporters. 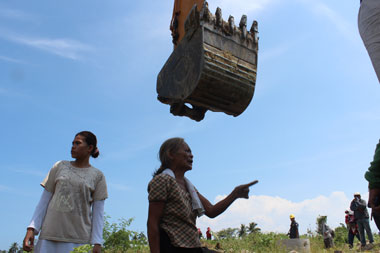 Notwithstanding Alegado’s words, the Filinvest’s backhoe started digging again an hour after the police chief left the area, provoking the residents, this time, to throw stones.

Police officers intervened anew and warned to arrest those who threw stones. Residents were undaunted and took turns at climbing over the backhoe’s operator station while the others stood in the way of the backhoe’s arm to stop the machine.

“We are defending our right because the police won’t help us stop them. I don’t care if the backhoe will run over me,” said Camumot who, this time, was already in front of the backhoe.

The residents have been resisting the demolition and have braved countless forms of harassment since then. Construction of Le Jardin began in 2006.

Camumot was imprisoned by the Villa Abrilles twice. First, she said, was in 2006 for boring a hole through the fence that the Villa Abrilles put up to keep her from entering her rice field which the latter succeeded in flattening out by dumping a landfill.

The second time was last year when she stoned the backhoe which the construction workers hired by the Villa Abrilles used to destroy the crops and fruit trees that Camumot planted.

In another attempt at evicting the residents last year, the residents’ light and water connections were cut off.

Following this, three successive incidents of indiscriminate firing upon barricading residents occurred between August to September last year. The residents pointed to the guards of the Addis Security and Risk Control Agency which they said were hired by the Villa Abrilles.

But lately, as they resisted Filinvest’s fencing operation, residents faced another harassment from company guards, this time, according to them, under a certain Steve Diaz.

“He said he’ll kill us all, including our children. We already filed a police blotter in Talomo,” Antonia Bariquit, a resident, confided in an interview.

Shotgun splinters, she said, also hit their houses as guards fired shots on August 6. The latter also threw stones at them, she added.

Jay, a member of the youth group Anakbayan was injured by a stone while they were at the area meeting with the community’s youth. Luckily, there were no other casualties as he was the only one standing at that time. “I was hit in my shoulder. After that, shots were fired so we ducked,” Jay said.

But residents remain unfazed by the threats. According to the residents, the Villa Abrilles claim over the land was based on a land certificate that does not exist.

Residents like Bariquit said they have verified Original Certificate of Title No. 5609 with the Land Registration Authority and found out that no such title, document or record under the name of Francisco Villa Abrille-Juna existed.

There is Title No. 5609 but “it’s a three-hectare land located in Calinan and not here in our place,” Camumot added.

Leon Bolcan of the urban poor group Kalipunan ng Damayang Mahihirap said that the use of spurious documents by land grabbers to usurp land and evict the urban poor is a recurring pattern in demolitions.

“They don’t care anymore if you have a title as long as they can go on with their intentions. But, as proven today, when residents themselves strengthen their resolve and defend their land and livelihood, they will become decisive,” said Bolcan.
Reposted by