MANILA — A consultant of the National Democratic Front of the Philippines (NDFP) exposed the ill treatment he got from his military captors.

Tirso Alcantara, popularly known as “Ka Bart,” has been in solitary confinement at the Philippine Army Custodial Center, Fort Bonifacio headquarters in Taguig City since he was arrested on January 4, 2011. He is facing a string of criminal charges, including illegal possession of explosives.

In their motion filed before the court, Alcantara’s lawyers from the Public Interest Law Center said the military is committing “blatant violation of Rule 113, Section 3 of the Rules of Court” which provides that the person arrested shall be delivered to the nearest police station or jail without unnecessary delay.”

In May, the Regional Trial Court in Gumaca, Quezon granted the motion and ordered the transfer of Alcantara to the Philippine National Police Custodial Center in Camp Crame, Quezon City. The Intelligence Security Group (ISG) of Philippine Army filed a motion for reconsideration but was denied last July 18. Judge Maria Chona E. Pulgar-Navarro of RTC Branch No 61 reaffirmed her May 9 decision. 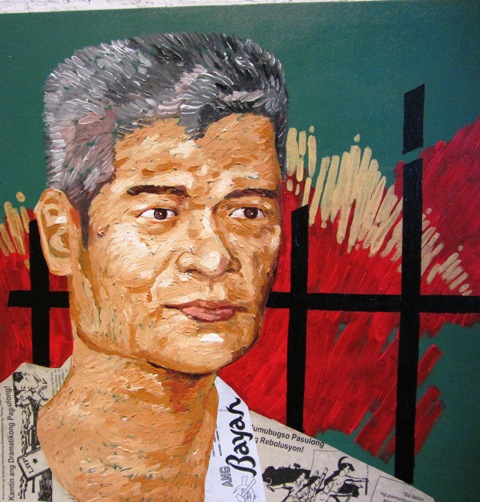 “Ka Bart, Di Magagaping Diwa” (Comrade Bart, consciousness that will not be subdued), a portrait of Tirso Alcantara in acrylic by June Padilla-Liberal. It is one of the artworks being exhibited by the End Impunity Alliance “to visualize the state of impunity in the Philippines.” (bulatlat.com file photo)

The court’s July 18 resolution cites Alcantara’s condition as one of the basis for its decision. In June, the NDFP leader submitted his affidavit to the court.

Alcantara is being made to eat unhealthy and contaminated food. On three occasions, he discovered shards of broken glass mixed with his rice. Once, he was served rice full of crawling ants. He also found three matchsticks mixed with the fish and soup served to him. At one time, he was served egg that had feces on top of the shell. On two occasions, he was served fish, which caused him to throw-up. Both times, he gave the leftovers to the cat, which also vomited after eating.

He was deprived access to clean drinking water several times. At one time, he was not given drinking water at all for almost three days. On several occasions, he discovered a bottle cap mixed with his drinking water. The cap appeared to be from a medicine bottle. The water reeked of a strong chemical/medicinal odor.

“The military has a long record of torture as if taking enjoyment from the Hollywood movies they watched,” Karapatan said, citing the experiences of former political detainees like Berlin Guererro and the Tagaytay 5. “They all got their own piece of unimaginable experiences from the hands of the fascist troops of the government.”

A court sheriff, who refused to be identified for fear that the military might get back at him, was sent by the RTC from Gumaca to deliver the resolution, August 13. But according to the reports of Karapatan, the legal counsel of ISG-PA Alex Alberto M. Popanes did not acknowledge nor receive the documents.

Karapatan challenged the current administration to take action immediately on the matter.

The NDFP said the arrest and detention of its consultants and staff members are violations of the Joint Agreement on Safety and Immunity Guarantees (Jasig) and the Comprehensive Agreement of Respect for Human Rights and International Humanitarian Law (CARHRIHL).

According to Karapatan, there are 385 political prisoners slapped with fabricated criminal charges. The group said that the practice of filing criminal charges against political dissenters violate the Hernandez political doctrine which prohibits the criminalization of political offenses.

Karapatan has repeatedly called on the Aquino administration to release all political prisoners.