The Lumad families left their community and set up a protest camp in Bukidnon after their village leader Jimmy Liguyon was killed by Alde “Butchoy” Salusad of the New Indigenous Peoples’ Army Reform (NIPAR) and his father, Nonong Salusad, a member of the Civilian Armed Forces Geographic Unit (CAFGU). But paramilitary forces continue to attack them with impunity.

Youth and student organizations in Bukidnon and Lanao were able to help Lumad community members in defending their protest camp against a group of masked and hooded men who attempted to harass the Lumads into leaving.

The League of Filipino Students-Lanao, the Students’ Alliance for the Advancement of Democratic Rights -Iligan Institute of Technology, Liga ng Kabataang Moro (LKM) Lanao and Bayan Muna Youth-Bukidnon for the last few weeks have been supporting protesting 11 Lumad families in the Bukidnon capitol grounds in Malaybalay City. The Lumads are all from Sitio Kiranggol, Brgy. Dao of San Fernando, Bukidnon.
The Lumad families have been forced to evacuate their community after their village captain and anti-mining advocate Jimmy Liguyon was killed last March 5, 2012 by Alde “Butchoy” Salusad of the New Indigenous Peoples’ Army Reform (NIPAR) and his father, Nonong Salusad, a member of the Civilian Armed Forces Geographic Unit (CAFGU). Liguyon—a Matigsalog-Manobo—was also the vice chairperson of Kasilo; he was shot and killed inside his house by Salusad.

After Liguyon’s murder, Salusad and the Nipar escalated their harassment of the residents, forcing them to to sign the Certificate of Ancestral Domain Title (CADT) that would allow mining firms and plantation corporations to begin operations in the 52,000 hectare-land areas owned by the indigenous community.
On September 3, the Lumads and the students were peacefully holding a discussion when eight masked men, riding four XRM motorcycles drove in.

According to reports, the Lumads of Tigwahanon tribe were on their sixth day of picket after they were forced to evacuate Sitio Kirangol, Dao, San Fernando, Bukidnon for fear of their lives.

In a statement, the youth groups said the masked men stopped in front of the camp and began destroying the sound system. The men succeeded in destroying one of the amplifiers and pulling down various protest streamers and tarpaulin banners. Then they used an electric shock device or Taser against random individuals and then immediately left. 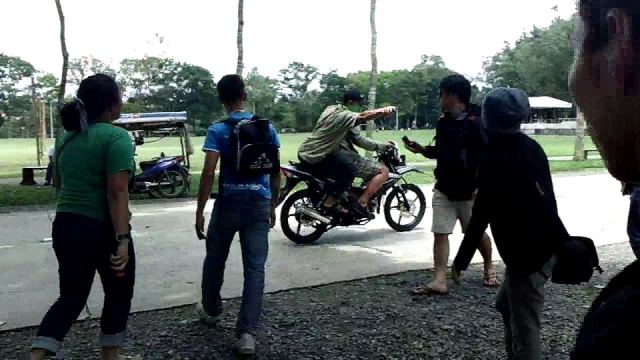 “We strongly believe that the motorcycle-riding-men-in-hood-armed-with-tasers are members of state security forces. The inaction of the members of the Capitol Security Unit, the police and the military— who were in full-battle gear—stationed nearby strengthens our suspicions. The police even cordoned the place hours ahead, but they didn’t block or go after the men in motorcycles,” the student groups said.
The groups said they would file a case on the harassment incident before the Commission on Human Rights. They also decried “the insensitivity of the provincial government of Bukidnon” because it has so far refused to heed the pleas for justice of the Lumad residents

“We despise the brutal acts of the state forces who are now focusing its attacks against the indigenous community instead of running after the suspects,” they said.

The student groups also said it was evident that there was cooperation and coordination between the Nipar and the CAFGU, as well as the police and the military in their attempts to stop public opposition against mining activities in the province and the rest of the region.

In a related statement, the Rural Missionaries of the Philippines (RMP) in Northern Mindanao Region said the Lumad families have had no choice but to seek sanctuary at the provincial capitol grounds of Bukidnon as paramilitary groups continue to harass them.

“They are untouchable – that is the message of the Salusads to the media as they control the thriving small-scale industry in the municipality,” said the RMP.

Earlier last month, another victim of the Salusads made a complaint with the RMP.

On August 2, 2012, the younger Salusad went to the small-scale mining area in Sitio Kiranggol. He reportedly called for Tessie Ombo, the financier of some miners, and demanded that she give him some money. Ombo, however said that she had already given the money to the miners. Salusad who was then accompanied by 10 other armed men proceeded to fire random shots at the ground and ordered Ombo to call the miners together.

Soon after, another Salusad arrived with 20 members of the Cafgu. They ransacked the belongings of the miners, looking for money and gold. Ombo was forced to surrender the 12 grams of gold she had after the Cafgu threatened to take her husband. She was then threatened that if she didn’t stop financing the miners, she would be killed. It has also been reported that the Salusads have two people working under them, Eper Manyangcal and Monina Tiwanan, who monopolized the gold market in the province.

“The government forces are inutile in solving conflicts in the remote areas of Bukidnon,” said Jomorito Goaynon, chairperson of Kalumbay Regional Lumad Organization. “We have no choice but to again set up our protest camp. The Salusads and their private army continue to harass our communities in San Fernando.”
Goaynon said Kalumbay plans to exhaust various legal processes to demand justice against the Salusads,the Nipar and the Cafgu even as they continue to harass the protest camp right in the middle of the province.

“We saw what happened when the people came home,” said Goaynon. “It is very easy to kill an issue as long as people won’t see and hear testimonies. It’s shameful that the provincial government and its police forces have been exerting such efforts to block the establishment of the camp-out instead of going after the Salusads,” he said.

As of Sept.3, the RMP-NMR said Bukidnon Vice Governor Jose Maria Zubiri and Fourth Infantry Division spokesperson Lt. Col. Eugenio Julio Osias, IV have yet to return calls and text messages requesting their assistance on the continuing harassment against the residents.