You Are Here: Home → 2012 → September → 28 → “Whatever Is Left Is Just Pieces of Bodies and cloth”: New report details the horror of living under drones

“Whatever Is Left Is Just Pieces of Bodies and cloth”: New report details the horror of living under drones

A new Stanford-NYU report, “Living Under Drones,” details the devastation to civilians – and possible war crimes – resulting from US drone strikes in Pakistan.

On the morning of March 17, 2011, Ahmed Jan joined over 40 other people at a bus station in Datta Khel, North Waziristan in Pakistan to settle a community issue in a large meeting, or jirga. The group split up into two circles, about 12 feet apart from each other, and despite the drones buzzing overhead, those present later described feeling “secure and isolated” from the drones. It was a sanctioned meeting and Pakistani authorities had been made aware of it.

Jan was sitting in one of those circles when he heard a “hissing sound.” An instant later a drone-fired missile struck the middle of his group, sending his body flying and killing everyone around him. 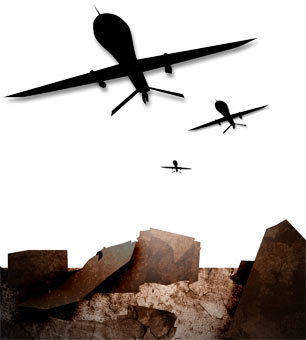 At least one more missile was fired, hitting the second group. Another witness, Idris Farid, said, “Everything was devastated. There were pieces – body pieces – lying around. There was lots of flesh and blood.”

At least 42 people were killed that day, many of them civilians. The Obama administration claims, to this day, that all those killed were insurgents.
This information comes from a new report jointly released by human rights attorneys from Stanford and New York University (NYU) that details with disturbing clarity the horror that it is to live in a drone-patrolled region.

The report, which draws on over 130 interviews of Waziris the researchers conducted, is in many ways the clearest evidence yet that the US drone program is not the precise, limited, restrained program US citizens are meant to believe it is. Rather, those interviewed describe a panopticon in which simple acts like going to school, going to the market, even simply gathering in a group in someone’s house, become life-threatening.

“The presence of drones and knowledge that drones can strike anywhere, at any moment, leads civilians to feel routinely anxious about potential strikes,” said Professor Sarah Knuckey, a human rights lawyer at NYU, and former advisor to the United Nations Special Rapporteur on extrajudicial executions, as well as one of the report’s authors, in an interview with Truthout. “They feel helpless to protect themselves.”

Weddings and especially funerals have become nearly impossible to attend. The US often targets funerals for drone strikes, one of many practices associated with the drone program that are very possibly in violation of international law, according to the report’s authors. Those who do attend funerals for those killed by drones, report a nightmarish scene of anonymous body parts buried together because the bodies have been so completely blown apart.

The report states, quoting Idris Farid again: “The community had to collect [the victims’] body pieces and bones and then bury them like that,” doing their best to “identify the pieces and the body parts” so that the relatives at the funeral would be satisfied they had “the right parts of the body and the right person.”

Khalil Khan, who was at the bazaar when the strike occurred, said when he got to the scene he couldn’t identify body parts. Unsure of what else to do, Khan said he “collect[ed] pieces of flesh and put them in a coffin.”

The report also details the practice referred to as a “double tap,” in which the same target is struck multiple times in quick succession. The result is that locals trying to provide help, and sometimes official humanitarian aid workers, are hit in the follow-up attacks. The authors conclude:

Evidence uncovered by our research team that humanitarian actors may not attend to strikes immediately because of second-strike fears is especially troubling. As UN Special Rapporteur on extrajudicial, summary or arbitrary executions Christof Heyns observed, “[I]f civilian ‘rescuers’ are indeed being intentionally targeted, there is no doubt about the law: Those strikes are a war crime….”

Pakistan has been the main country where drones have been used, though hardly the only one. Haykal Bafana, a lawyer in Yemen, described his two young daughters’ reaction to seeing a drone. “My daughters were jumping up and down shouting, ‘Aeroplane! Aeroplane!'” he said to me in an email. “I found that extremely disturbing, as I could picture the same scene in other parts of Yemen or Somalia, even as the drone fires a Hellfire missile. Terrifying thought.”

For many in North Waziristan and Yemen, that terrifying thought is an inescapable part of life. The Bureau of Investigative Journalism has reported that between 474 and 884 civilians have been killed as a result of drone strikes in Pakistan since 2004. Of those, 176 are children. The report quotes Feroz Ali Khan, whose father-in-law’s home was hit, who described the aftermath of a missile strike: “Whatever is left is just little pieces of bodies and cloth.”

Drones are a bipartisan issue. You can’t cast a vote for a viable candidate in 2012 who won’t continue to – in the words of the report – “terrorize” the people of Pakistan, of Yemen, of Somalia, with flying robots. The ACLU has called the drone program the “centerpiece of the Obama administration’s counterterrorism policies.” Mitt Romney has promised to continue the program on the off-chance he’s elected, andhas even gone so far as to say Pakistanis are “comfortable” with drones.

Beyond that, critics like Glenn Greenwald have argued that the establishment media has served primarily as a tool the Obama administration has used to display its so-called strength in going against accused terrorists. Greenwald and others have argued that nearly all that the public knows about the program comes from leaks that serve to show Obama’s warrior power, while the CIA still refuses to acknowledge the program based on what they call national security grounds.

As a result, people in the US have a hugely favorable view of drones. One survey conducted in June of this year showed a 62 percent approval for drones, while another from February showed an approval rating of 83 percent.

To the extent that we talk about drones at all in this country, we talk about the accused terrorists they ostensibly target. At least one of the reasons those poll numbers are so high is the complete absence of the stories of the people in North Waziristan. This report, which Sarah Knuckey described to Truthout as “intended to insert the stories of those who bear the brunt of US drone strike policies – civilians in North Waziristan – into US public and policy-maker debates,” takes an important step toward achieving that goal. Reposted by