You Are Here: Home → 2012 → October → 2 → Sister Stella Matutina: Vilified for defending the environment

MANILA – After 18 years of religious work in different parts of Europe, Benedictine nun Sister Stella Matutina was assigned to Mindanao in 2008.

One day, the nun received a call from one of their parishioners begging for help. Sister Stella was told that the rural folk were surprised to see several heavy equipment of a mining company, ready to bulldoze the whole of San Isidro village in Lupon, Davao Oriental, for manganese.

“I was crying then,” Sister Stella recalled. “The people were not consulted.”

That was her so-called baptism of fire in the arduous struggle for the defense of the environment and of the people affected by the large-scale mining operations.

Eventually, they were able to drive away the mining company by preventing its entry to the community. The success of this particular campaign paved the way for the formation of the local chapter of Panalipdan, a multi-sectoral alliance for environmental awareness and protection and for the defense of lands from exploitation.

From then on, Sister Stella, now 44, experienced various forms of harassment from state agents. 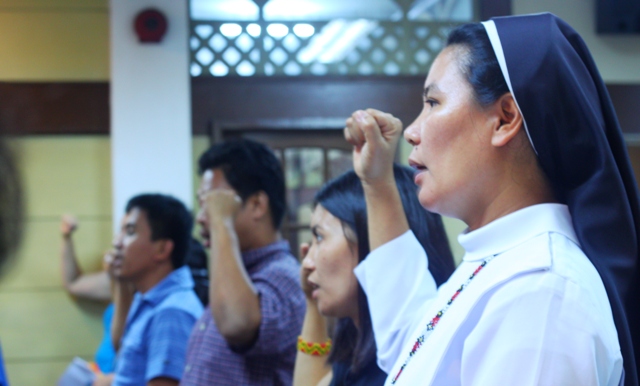 Speaking at a conference of human rights defenders in Quezon City last week, Sis. Stella recalled how she and three other companions were held at gunpoint by elements of the 67th Infantry Battalion of the Philippine Army (IBPA) in February 2009 in Cateel, Davao Oriental.

“The soldiers arrived at around 3:30 a.m. at the barangay hall of Taytayan. They could not wait for the morning that they had to wake us up from sleep,” Sister Stella said. “There were 40 of them and we were only four. They accused us of being NPA guerrillas.” The NPA or the New People’s Army is the armed wing of the Communist Party of the Philippines (CPP).

She and her companions filed a complaint before the Commission on Human Rights Region XI but the complaint has not been acted upon until now, Sister Stella said.

But this was not the last harassment she experienced.

Recently, 1st Lt. Hermie Montelibano of the 28th Infantry Battalion of the Philippine Army publicly branded her as an NPA pretending to be a nun.

Sister Stella said she knows she is under surveillance. She received reports from the rural folk that the military has been asking about her and her activities.

Amid the danger, the Benedictine nun has kept her humor. “One time, newly-graduate soldiers came and said, ‘An NPA nun is operating here.’
Don’t they know that the Sister Stella they were referring to is a beautiful nun?”

The audience roared in laughter.

Seriously though, Sister Stella called on fellow human rights defenders to pray for her and her colleagues in Mindanao, as most of them were either killed, are in hiding or charged with trumped up criminal cases.
She said that 14 environmental activists have been killed under the Aquino administration, including Italian missionary Fr. Fausto “Pops” Tentorio. The most recent victim of extrajudicial killing was Genesis Ambason, a tribe leader known for his anti-mining stance.

The Benedictine nun also cited more than 30 Lumad leaders and members in Surigao del Sur who have been charged with rebellion, frustrated murder, arson, illegal possession of firearms and explosives and malicious mischief. Sister Stella said the tribe leaders and members are vocal against mining in resource-rich Andap Valley.

Sister Stella said the twin sister of mining is militarization.

“Aquino’s counterinsurgency program Oplan Bayanihan is so vicious,” she said.

“It does not suffice anymore that we remain defensive; we have to be offensive,” Sister Stella told her fellow human rights defenders.

“If this is a democratic country, why are we not allowed to oppose mining?” Sister Stella said.

Mindanao’s lands, Sister Stella said, are planted with jathropa, palm oil, pineapple. “Transnational corporations control millions of hectares of agricultural land. The mountains, meanwhile, are being targeted for mining.” Sister Stella said. “What else is left for the people?”

Those who have left the provinces and settled in Manila are being driven away, too through violent demolition of their homes, the nun said.

“Our food security is threatened. Can people eat pineapples or bananas alone?” Sister Stella said. “We cannot allow foreigners to plunder our resources and destroy our environment.”

“This is our land. We should be the ones to utilize the land to create more jobs,” Sister Stella said. “We in Panalipdan say no to large-scale mining, yes to agriculture, yes to land distribution.”