“How could they participate in the alleged ambush when they were here with us in Manila preparing for the May 1 rally? Clearly, the charges are fabricated.” – Courage

MANILA – Two organizers of Courage, a federation of government employees’ unions, were arrested by state agents in separate incidents on Dec. 3 and were later surfaced at the Camarines Norte Provincial Jail in Daet, south of Luzon province.

In the morning of December 3, Randy Vegas, 40, sent a text message to Tessie Gonzales, secretary general of the union at the Metropolitan Manila Development Authority (MMDA). “He wished us luck for our scheduled protest that day,” Gonzales told Bulatlat.com in an interview.

On the same day, Vegas did not show up at a meeting he was supposed to attend at the national office of Courage in Quezon City. He also did not come to another appointment later that day. Colleagues from Courage sent him text messages and got no reply. He did not come home that night.

Meanwhile, Raul Camposano, 51, went to MMDA to support the protest action of the employees for the release of their benefits under their 2010 Collective Negotiations Agreement (CNA) with the management. Camposano left the MMDA at around 3:30 p.m. His colleagues from Courage asked him the whereabouts of Vegas and said he did not know where Vegas was. Camposano also did not make it home that night. 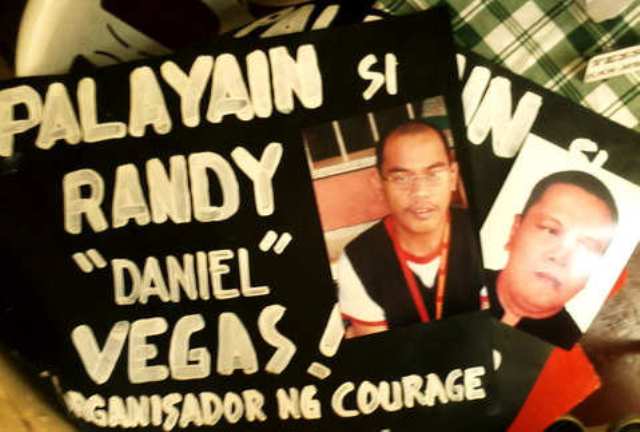 A placard made by Courage calling for the release of Randy Vegas and Raul Camposano.(Photo by Darius Galang/ Pinoyweekly.org)

Vegas and Camposano have been charged with five counts of murder, one count of theft and one count of frustrated murder before the Regional Trial Court Branch 64 in Labo, Camarines Norte. The charges were in connection with their alleged participation in an ambush by the New People’s Army (NPA) against the Armed Forces of the Philippines in Maot, Labo, Camarines Norte on April 29.

Officers of Courage, including its president, Ferdinand Gaite, family members of Vegas and Camposano left for Daet on the night of December 5 to gather facts about the incident. Together with members of Karapatan-Camarines Norte, they visited the two activists in jail.

In a phone interview, Gaite told Bulatlat.com the details of the arrest based on their interview with the two Courage organizers.

On Dec. 3 at around 7: 10 a.m., Vegas alighted from the bus at GMA-7 EDSA. He was on his way to the Courage national office. After taking five steps, someone grabbed his neck and another man snatched his backpack. He was dragged inside a red Innova van. He was immediately handcuffed; his face was covered with a towel.

One of the men partially lifted the towel and showed him a paper with his name on it. He was told he is facing murder charges.

He was brought to Camp Bagong Diwa in Taguig City. There, his blindfolds were removed and he saw those who arrested him. They were all in plainclothes even as they introduced themselves as policemen.

Gaite said Vegas was interrogated well through the night. The first one who “interviewed” him asked about the April 29 raid in Maot, Labo, which Vegas denied having participated in. The second man who interrogated Vegas said: “The protest action of MMDA employees was successful.”

“He was accused of being a communist and was repeatedly asked about other members of the Communist Party of the Philippines,” Gaite said.

When Vegas asked for access to a lawyer, he was told: “If you have a lawyer, you would not say anything.”

On the same night, Vegas was taken to the Camarines Norte Provincial Jail where he met Camposano.

Camposano, meanwhile, was on his way home at around 9 a.m. He was walking in front of the Dominic Hospital in Talaba, in the province of Cavite south of Manila, when six men armed with rifles surrounded him. He was told not to resist arrest and then he was forced inside a white Crosswind vehicle.

Like Vegas, Camposano was not shown any warrant of arrest.

Gaite said that while the two were not subjected to physical torture other than being blindfolded and handcuffed for long hours, the mental torture was intense.

“Randy [Vegas] was told by his captors that they know his mother and his wife,” Gaite said. “They also told him details about his days as a student activist. He has been under surveillance.”

Gaite decried the vilification of the two Courage organizers.

“Courage is a legitimate organization with a track record of advancing the rights and welfare of government employees,” Gaite said.

Gonzales said Vegas and Camposano helped in raising the political consciousness of MMDA employees. “They are only teaching us about our rights, the benefits that we should have been getting,” she said.

“How could they participate in the alleged ambush when they were here with us in Manila preparing for the May 1 rally?” Gonzales asked. “Clearly, the charges are fabricated.”

Vegas has been a full-time organizer of Courage since 1998. Before that, he was a member of the national secretariat of the College Editors Guild of the Philippines (CEGP). During his college days, he was editor of Quezonian, the student publication of Manuel Luis Quezon University.

Meanwhile, Camposano used to be an employee of the judiciary, serving as sheriff in a Makati local court. He resigned in 2010 to be a full-time organizer of Courage.

“The two are innocent of the crimes being hurled against them,” Gaite said. “They did not participate in that ambush.”

Courage is preparing for the legal defense of their two organizers. Gaite said they would also conduct other forms of protest.

Gaite said the arrest is even more glaring given that it happened a few days before International Human Rights Day.

“This illustrates how the Aquino administration violates the rights of its citizens,” Gaite said. “Anyone can be arrested on mere suspicion of being a communist.”

The arrest and detention of the two Courage organizers is not an isolated case.

According to human rights group Karapatan, 239 have become victims of illegal arrest and detention under the Aquino administration.

There are now 401 political prisoners all over the country, 124 of whom were arrested and detained under Aquino.