You Are Here: Home → 2013 → February → 1 → Network for clean, peaceful, and responsive elections launched

Taft, Manila— Members of the youth sector convened at the Iglesia Filipina Independiente for the launching of Rock the Vote Philippines, a youth network that advocates for clean, peaceful, and responsive elections. The delegates tackled pressing issues such as political dynasties, election-related violence, fraud, traditional politicians, and the usage of government programs such as the Conditional Cash Transfer (CCT) for early electioneering.

The launch, geared to forge unities and formulate a youth agenda, sought to unite the body of upcoming events and activites that range from voters’ education, senatoriables’ forums, pollwatchers’ training and recruitment, and solidarity concerts.

The delegation of student leaders was comprised of student council officers, student journalists, members of church youth formations, along with other youth organizations. The event was graced by the Most Reverend Ephraim S. Fajutagama, the current Obispo Maximo of the Iglesia filipina Independiente. Reverend Fajutagama addressed the delegation with a message that sought to inspire and encourage the youth in taking part in national issues such as the national elections.

The event culminated in a covenant signing, with the network’s membership pledging their commitment to consolidate all efforts of various youth organizations, formations, alliances and networks to push for a youth agenda that will address most of the major issues related to the national elections. The delegates thumbed in their pledges as a symbolic action to stand by the youth agenda, advocate for an election that is free of fraud, violence, and deception from political dynasties and “trapos.”

The Rock the Vote delegation pointed out the irony in this year’s election—a landlord-turned politician advocating for change, family trees that can be traced in campaign advertisements, and evidently misleading campaigns.

“Philippine politics has long been dominated by political dynasties, where a few political families monopolize political power. Politicians even go as far as mentioning relative who are currently in government instead of presenting ther General Plans of Action (GPOA),” said Mr. Einstein Recedes, convenor of Rock the Vote Philippines. 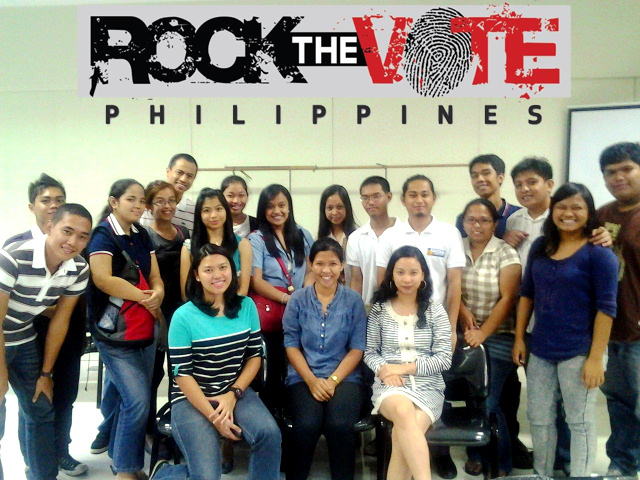 “There is also traditional politics, where politicians who utilize the best tactics of fraud, violence, and deception decide on political affairs. Moreso, traditional politicians have been luring the Filipino people into thinking that they are advocates of the right to education, housing and labor rights. Some assert that their platform include the protection of the environment, the distribution of lands, and a healthcare system that will benefit the Filipino people. Some claim to be vanguards of safeguarding human rights and alleviating poverty. However, these issues remain unaddressed as traditional politicians and members of political clans will not really cater to the genuine interests of the youth and the people, and will never remain true to the principles of democracy,” concluded Mr. Recedes.

Rock the Vote Philippines network is scheduled to convene on February 27, 2013 for the building of a youth agenda in a day of forums and discussion that will be concluded with a concert.

The network is to organizations, student councils, and student publications for membership. Individuals are also enjoined to sign up as a volunteer.