MANILA – Coconut farmer Maria, 42, travelled all the way from Ragay, Camarines Sur to join other small coconut farmers in a series of protest actions here.

Maria, a mother of three, and her husband, belong to the third generation of coconut farmers. Maria’s parents and grandparents also planted coconut and processed copra for a living. At a young age of 15, Maria started working in the fields and she remembered how her father, Marcelo Moris, paid a levy of P0.55 for every 100 kilogram of copra they sold to millers and exporters. The excise paid by some 4.5 million coconut farmers since 1971 became known as the Coconut Investment Fund (CIF).

In 1973, the Coconut Consumers Stabilization Fund (CCSF) was created. For nine years since, the farmers were taxed an additional P15 for every 100 kilos of copra they initially produced. In the following years, this was increased to P100 per 100 kilos of copra, according to a primer prepared by the Kilusang Magbubukid ng Pilipinas (KMP or Peasant Movement in the Philippines). In 1975, the United Coconut Planters Bank (UCPB) was established from the fund excised from coconut farmers. The Philippine Coconut Authority (PCA), Philippine Coconut Producers Federation (Cocofed) and UCPB managed the fund. 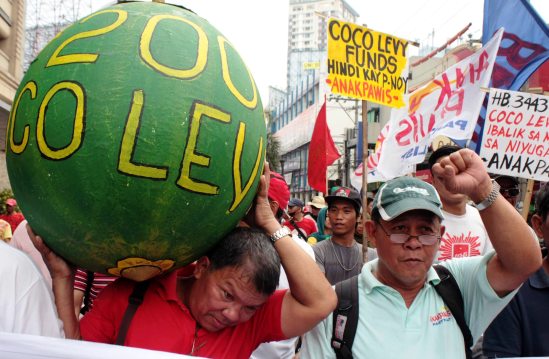 Maria lamented that since then, for the past four decades, their family has not benefited from the coco levy fund. Her father is now 79 years old, and her mother, 75. They are past their productive years and not a single centavo has been returned to them.

“The coco levy fund must be returned to us,” Maria said in Filipino in an interview with Bulatlat.com during their protest action inside the compound of the Department of Agriculture where the National Anti-Poverty Commission holds its office.

Maria said small coconut farmers are among the poorest in the country. A kilo of copra is pegged at only P14. The amount does not compensate for the intense labor of production. It usually takes two weeks to make copra out of coconuts.

“Even before producing copra, coconut farmers loan money for food and other basic needs of the family,” Maria said. “The income we get from copra is just enough to pay for our debts.”

Maria considers herself fortunate to have a small parcel of land for rice production. She said though that the palay they produced is often not enough to sustain them for long. Their area is not irrigated; they rely solely on water from the stream. She said the situation of many others who do not produce palay is worse.

Maria joined other small coconut farmers from Bicol, Quezon, Aurora and Cagayan provinces under the Kilusang Magbubukid ng Pilipinas and the Coco Levy Funds Ibalik sa Amin (CLAIM) marched from DA to Chino Roces (formerly Mendiola) bridge to demand the immediate distribution of coco levy funds to them in the form of cash and other benefits.

The KMP and CLAIM called for the abolition of the Presidential Task Force on Coco Levy under the supervision of National Anti-Poverty Commission Chair Joel Rocamora.

“The Aquino government, through NAPC, will definitely squander and use the coco levy funds for its own interests. Coco farmers nationwide must remain vigilant and safeguard the funds,” Anakpawis Rep. Rafael Mariano said. 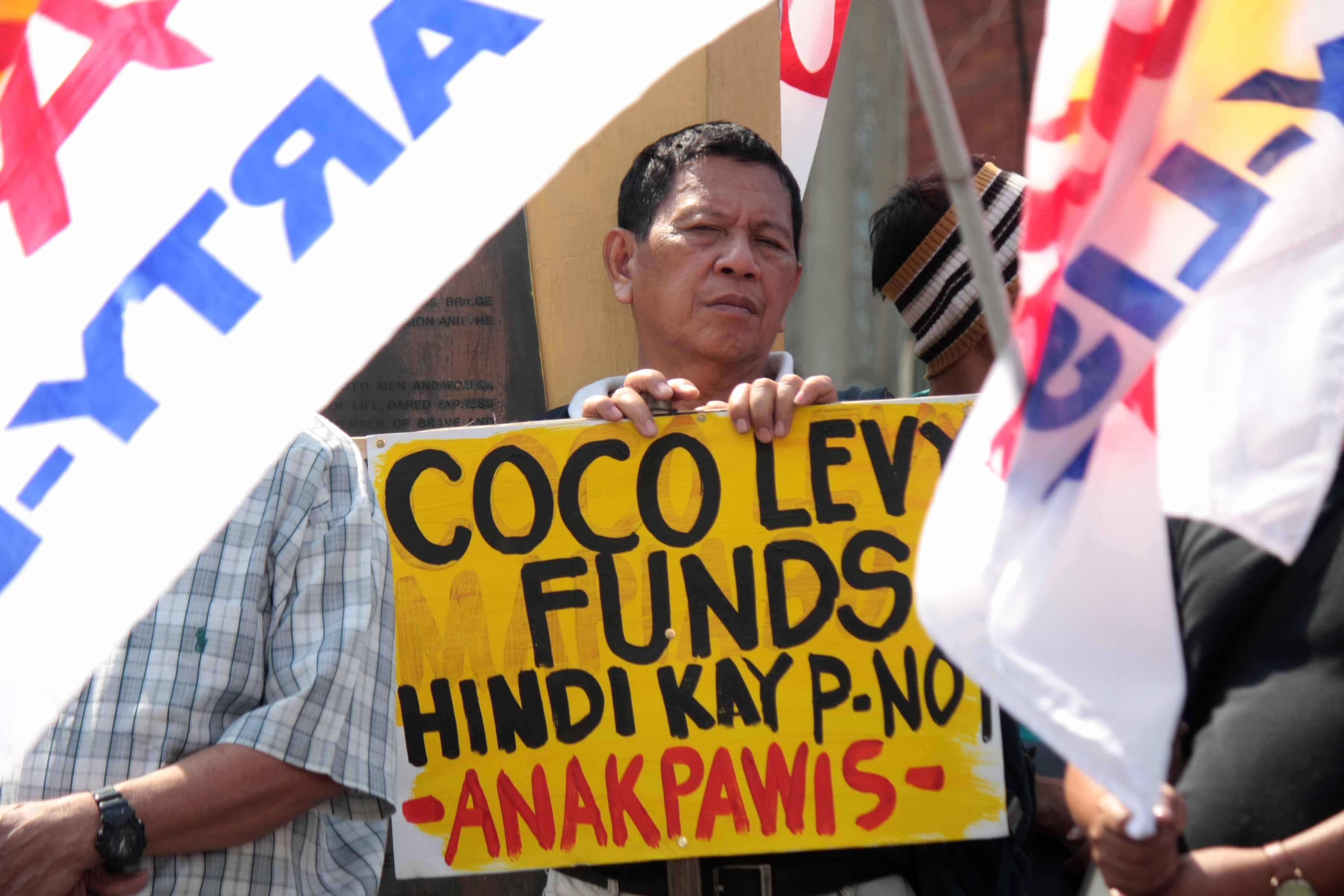 “Control and management of the coco levy funds must be given directly to coconut farmers,” Mariano, also chairman of KMP, said. “Actual cash distribution is also necessary to give justice to the beneficiaries who have waited for decades to benefit from their hard toil.”

“The proceeds from the recovered fund must be given to farmers in cash,” Mariano said.

According to CLAIM, an alliance of coco levy claimants, during a dialogue with Presidential Commission on Good Government (PCGG) early this month, the commission said the P56.5 billion from the 27 percent from San Miguel Corp. is deposited in escrow by the PCGG at the Bureau of Treasury (BTr). The P13.5 billion dividend earning is with the United Coconut Planters Bank (UCPB) deposited as special drawing account (SDA) and earning 3.5 percent to 3.6 percent interest.

“With the SCFC, small coconut farmers will have complete control over the coco levy funds and prevent the likes of NAPC secretary Joel Rocamora who did not contribute even a single cent to the funds to meddle with our money,” Willy Marbella, CLAIM national coordinator, said.

Marbella said small coconut farmers will be the primary beneficiaries of the fund “in the form of cash and other social benefits including, but not limited to, pension benefits, medical and hospitalization benefits, maternity benefits, and educational assistance including scholarships, among others.”

Under the farmers groups’ proposal “socio-economic projects initiated by small coconut farmers and their organizations and/or cooperatives financed by the Coconut Farmers’ Fund shall primarily focus on: livelihood programs and projects meant to provide additional incomes to small coconut farmers; small and medium-scale coconut enterprises, marketing and trading mechanisms, inventions and innovations of machineries and equipment for the development of high-quality coconut and improvement of local coconut production; and programs that would provide loan facilities for small coconut farmers.”

The groups proposed that all acquired assets, investments, and corporations through the coco levy fund should be turned over to the SCFC. The SCFC shall directly manage the operations of the CIIF-Oil Mills Group, 14 Holding Companies, United Coconut Planters’ Bank, Cocolife, and other corporations acquired through the coco levy funds for the benefit of small coconut farmers.