You Are Here: Home → 2013 → February → 5 → Another US Navy submarine arrives amid unsolved Tubbataha grounding

Another US Navy submarine arrives amid unsolved Tubbataha grounding

MANILA – The problem with the grounded US Navy ship is still ongoing, and many questions as to why it had sailed there in the first place and what will happen to it and the reef are still unanswered, yet, here comes another US military ship, a nuclear-powered submarine, docking in Subic Bay, Zambales, the former US military base shuttered by popular demand in 1992. The docking, as expected, drew protests.

“The presence of a US nuclear-powered ship at Subic clearly violates the nuclear- free provision of the 1987 Philippine Constitution as well as Art. II sec. 7, which requires an independent foreign policy that prioritizes national interest,” said Bayan Muna Partylist Rep. Neri Colmenares.

The USS Cheyenne is described by the US Pacific Command as a Los Angeles-class nuclear attack submarine capable of launching Tomahawk missiles, which are long- range rockets that can be armed with nuclear warheads. In fact, it is being described as one of the most capable nuclear attack submarines in the world today. For Malacañang to grant it a diplomatic pass to enter Philippine waters and dock at Subic Bay, is viewed by various groups as “callous.” 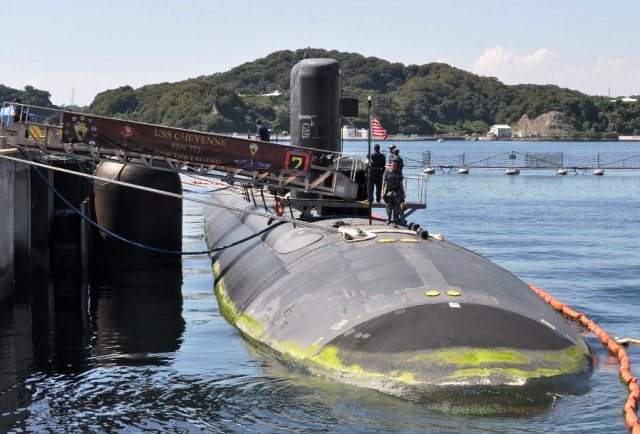 USS Cheyenne (SSN 773), a Los Angeles-class submarine, arrived in Subic Bay on Friday, February 1st for “a routine port visit,” to “permit the Cheyenne to replenish supplies as well as offer its crew an opportunity for rest and relaxation.” (Photo from US Embassy in Manila)

Malacañang justifies this by saying that it is merely a “nuclear-powered” ship and, thus, not covered by the prohibition of the 1987 Constitution against the entry and stockpiling of nuclear weapons.

“Aquino’s callous permission for and defense of the entry of this nuclear-powered submarine into our country shows the world just how unthinking his obedience to the US is,” said Elmer “Bong” Labog, chairman of Kilusang Mayo Uno, in a statement. As the USS Cheyenne is also headed to the same path taken by the USS Guardian, critics such as the KMU now ask: “What is the US up to this time?”

“Every American warship that docks in the Philippines reduces the country to a military outpost of the US in the Asia-Pacific region and likewise reveals the farcical claims of Philippine sovereignty by the puppet Philippine government,” the CPP said in a statement. They warned that the rising number of US naval vessels that dock and patrol in Philippine seas increases as well the possibility of more environmental damage such as the destruction of the Tubbataha corals and the reported dumping of human and toxic waste off the coast of Subic last year.

In 2012, US ships made 197 port calls in the Philippines, while some 444 American aircraft were cleared for landing in the country’s airports, the Department of Foreign Affairs said. The increase in port calls represented a more than four-fold growth from recorded arrivals in 2010 and 2011.