You Are Here: Home → 2013 → February → 5 → ‘Impact of damage to Tubbataha by US Navy ship more than what is being reported’ – patriotic groups

Various groups agreed to file a petition before the Supreme Court “to compel the Aquino government to seek claims, to exhaust all means to investigate what happened, and to defend Philippine sovereignty.”

MANILA –When the US Navy’s minesweeper trespassed and got stuck at Tubbataha Reef, the daily catch of Palawan fisherfolk began to decrease. It has been two weeks now since the US navy ship got stuck at the marine park with the damage to the reef reportedly growing from the previous estimated 1,000 square meters to more than double that.

And damage is feared to further widen the longer the navy ship remains stuck, prompting more calls for the Philippine government to investigate and take action. It would take at least 250 years for corals to grow back, experts said.

So far, critics slammed Malacañang for having given the US military freedom to solely take action, allowing the US Navy to get more reinforcement and ships in the area, for example, giving them privacy in stripping off the contents and armaments of its minesweeper, allowing them to forbid Filipinos including the coastguard from getting near their ship, allowing the US Navy to spirit out of the country most of the reported 80-plus sailors of the trespassing minesweeper. It is not even questioning the US government why its navy ship was there in the first place, various groups said. The Aquino government has also apparently ceded to the US government the investigation into why it got stuck in the no-sail zone. Now it has also seemingly given the US military the sole command in removing the ship.

From dragging it out to airlifting, the latest proposal to get the ship out of the protected reef is by dismantling it. All the while, the ship continues to batter the reef, and according to fisherfolk members of Pamalakaya in Palawan, oil has started to leak from the US navy ship, but news about it is apparently being kept under wraps. All these combine to immediately disadvantage the livelihood of Filipinos, especially the Palawan fisherfolk. 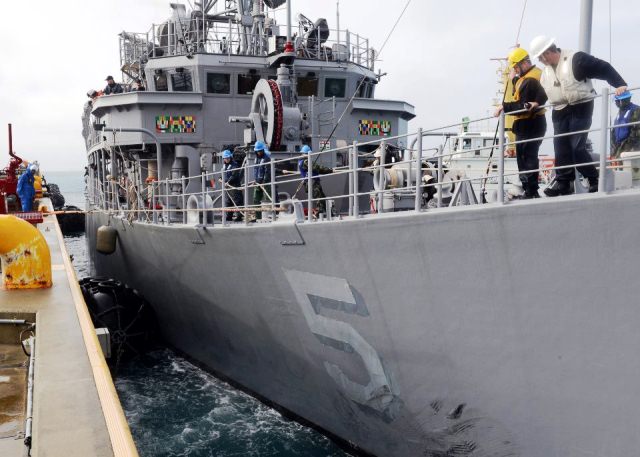 USS Guardian (MCM-5), a U.S. Navy Avenger-class mine countermeasures ship, arrived in Subic Bay on Jan 13 “for a routine fuel stop” and to “allow the ship to replenish supplies as well as give the crew an opportunity for rest and relaxation,” said the US Embassy in Manila. The USS Guardian is assigned to the U.S. Navy’s 7th Fleet (Photo from US Embassy in Manila)

In a recent report from the Pamalakaya chapter in Palawan, fisherfolk said they cannot get as near to the reef now as previously allowed because of the grounded ship, Salvador France, national vice-chairman of Pamalakaya, told Bulatlat.com.

The waters near Tubbataha are the richest in the area as it is the breeding ground for many fishes. While before the fisherfolk are allowed to catch fish in areas about seven kilometers near Tubbataha Reef, now, they said, they are pushed back to 15km or 10km at most.

In the first few days of the USS Guardian’s grounding, Pamalakaya fisherfolk in the area complained that fisherfolk were barred at gunpoint from going near the reef and their usual fishing ground. They encountered machine guns trained on their approaching small boats. Later, they said the local government issued advisories forbidding them to enter the area near the grounded US Navy ship.

They were allowed to fish 15km to 10km at most near the reef after the US Navy have stripped off some equipment of their grounded ship. But other US military ships continue to arrive in the area. Pamalakaya said many towns in Palawan are affected by lost livelihood for their fisherfolk, as their daily catch dropped from 10 kilos a day to just three kilos.

In a consultation of various groups led by multisectoral Bagong Alyansang Makabayan (Bayan) to determine the legal charges to be filed against the US government and the actions they deem the Aquino government should have been taking in the name of Philippine sovereignty, the effect on fishing grounds and peoples livelihood is one of the first damages they confirmed would worsen in the coming days.

The immediately affected area of the USS Guardian’s extended battering of the reef are the fishing areas in Celebes sea and large parts of the West Philippine sea, an environmentalist lawyer said. Pamalakaya estimates that at least 20-percent of the country’s fish production stands to be affected by the ship’s grounding. Fisherfolk have initially signified willingness to file charges, they said.

Pamalakaya has, in fact, already mailed their first diplomatic protest to the US government. Last Monday, they said they also urged Justice Secretary Leila de Lima to immediately file criminal charges against US officials of navy ship USS Guardian.

Continuing damage to the Philippines, inaction from the Aquino government

Aside from the continuing threat to the reef biology of the still stuck USS Guardian, the zealousness with which the US Navy has beenp preventing other ships, whether from the Philippine Coastguard or the Tubbataha Park management or from lowly and puny bancas of poor fisherfolk to get near its stuck minesweeper,had fuelled more suspicions from critics.

The USS Guardian was not listed in ships allowed by the Visiting Forces Agreement to enter Philippine territory, lawyer Terry Ridon, president of Kabataan Partylist, said last Saturday. That the minesweeper still sailed there and entered a no-sail zone, against warnings from the Tubbataha Park Management Board, only further exposed the dangers of the Visiting Forces Agreement (VFA), he said.

Even if the ship’s digital charts were faulty, why did its Navy personnel ignore the warnings of the Tubbataha Park management? Critics asked. And why is the Aquino government not doing its best to make the US government answer to that?

As more US ships are set to arrive for the operation to dismantle the USS Guardian, Palawan fisherfolks expressed alarm.

“We say there might be other ways (of dealing with the grounded ship), because if larger ships arrive, and the dismantling of ship takes more than a month, and the oil spill continues, the corals will continue to die,” France of Pamalakaya said during the Bayan-led consultation.

Kalikasan Partylist’s Clemente Bautista called for a more transparent and thorough study into the best and speediest ways of resolving the immediate problem of the stuck ship. Agham’s Giovanni Tapang suggested third-party ‘salvagers’ who have more expertise in doing such things, rather than the US-led military who has much to answer for, and perhaps also cover up for.

The Philippine government does not seem to have any position on the ongoing coral destruction by the ship, France of Pamalakaya said. He compared Aquino’s inaction to government response on the supposedly violent rally at the NAPC by coconut farmers, over which the Aquino government has immediately condemned the farmers and ordered an investigation.

While the multisectoral members and allies of Bayan are preparing the legal charges to be filed locally and internationally, its members urged Congress to take action on the various resolutions about the immediate scrapping of VFA already filed in Congress. In recess or not, the lawmakers can conduct a congressional inquiry, said Elmer “Bong” Labog, chairman of Kilusang Mayo Uno.

Ridon of Kabataan Partylist urged the public to support their plans to file charges against the US military and government. One immediate action they said the public can do is support an online petition to compel the White House to respond.

Ridon is also urging the public to help them call on UNESCO to take action to save the Tubbataha Reef.

The Bayan-led consultation agreed that a continuing mandamus should be filed “to compel the Aquino government to seek claims, to exhaust all means to investigate what happened, and to defend Philippine sovereignty.” That is, even if the problem goes “beyond the issue of compensation.” As former Gabriela lawmaker Liza Maza said, the “geopolitical agenda of the US in this part of the world, and the VFA, make it possible for more accidents like this to happen.”

As such, beyond the issue of compensation, for patriotic groups, it is also of utmost importance to scrap the Visiting Forces Agreement and compel the Aquino government to truly defend Philippine sovereignty.