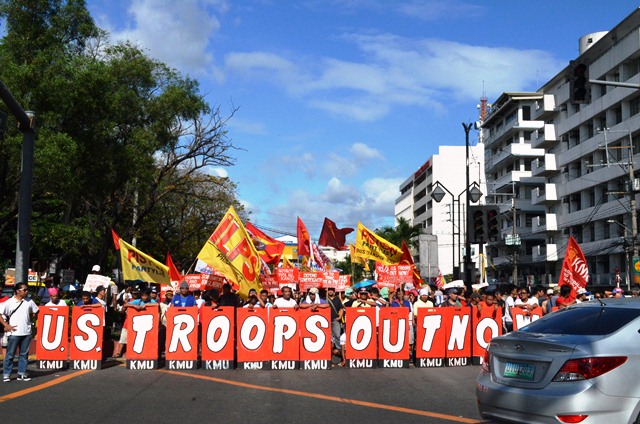 MANILA – Saying President Benigno “Noynoy” Aquino celebrates only “the restoration of US-backed elite democracy in the country,” and that he is merely paying lip service to the heroism of the workers and people before, during and after Edsa, workers and urban poor led by labor center Kilusang Mayo Uno marked the 27th anniversary of the Edsa 1 uprising with a march to the US Embassy this Monday. They were blocked by the police; a brief scuffle ensued.

“Twenty-seven years have passed and the Filipino workers and people are still not enjoying genuine independence, democracy and progress,” said Roger Soluta, KMU secretary-general. “The US has always stood in opposition to the realization of these ideals in the country.”

“The Edsa people power uprising is a weapon of the Filipino workers and people in fighting for just demands. Today, we are commemorating Edsa 1 by calling for the ouster of US troops in the country,” Roger Soluta, KMU secretary-general, said on Monday. 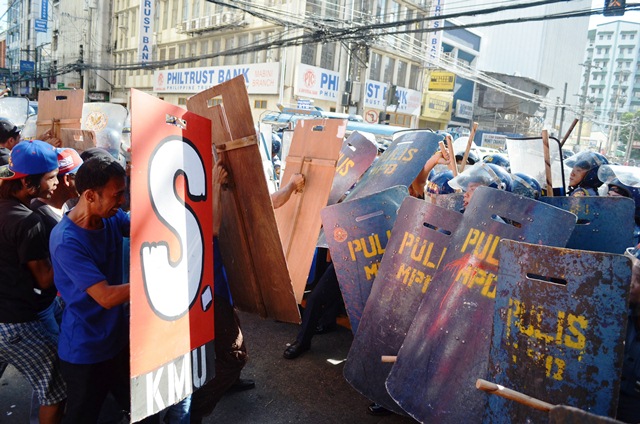 “We want US troops out of the country. They are causing damage to our environment, insulting the country’s sovereignty, interfering in matters that are internal to the country, and committing crimes against Filipinos with impunity,” he explained.

KMU cited some recent mishaps brought by the increased presence of US military in the Philippines. The group said these should prompt the government to expel US military presence here. The labor center cited the USS Guardian’s grounding into the Tubbataha reef, the US Navy’s dumping of toxic wastes into the country’s seas, the entry of nuclear-powered submarines that may be nuclear-armed.

The labor group urged for the revocation of the Visiting Forces Agreement, which they note the US and the Aquino government are using to justify the increased US military presence in the country.

The labor center disputed Noynoy’s oft-repeated justifications of US military presence in the Philippines. “They (the US) are here to safeguard US interests in the country,” Soluta said, adding “They go hand-in-hand with the US’s economic domination and plunder of the country’s environment and resources.”

KMU expressed support for the moves of Senators Loren Legarda and Miriam Defensor-Santiago to investigate the grounding of the USS Guardian into Tubbataha. They also rejected US Secretary of State John Kerry’s offer of compensation over the incident. 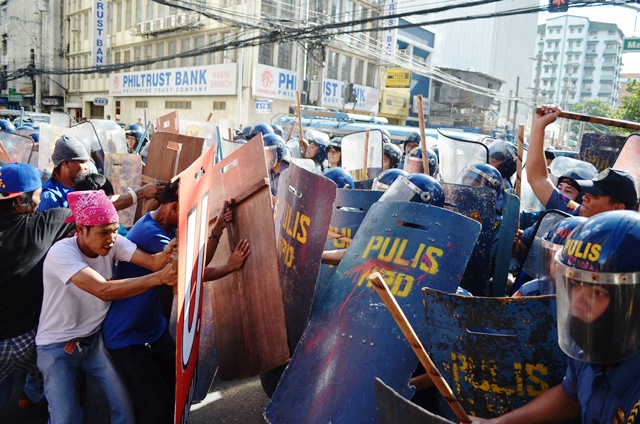 “The Tubbataha incident deserves a thoroughgoing investigation. The US government must be held accountable under the country’s laws and international laws,” Soluta said. He added that no matter how immediate or huge, no amount of compensation should distract us from pursuing justice and accountability over this incident.