Lito Bais, chairman of Unyon ng Manggagawa sa Agrikultura (Uma)maintained that the DAR should have referred to the signatories to the 1989 Stock Distribution Option instead of the list submitted by the HLI management to the high court.

HACIENDA LUISITA, Tarlac – Rafael Marquez, 59, went to the covered court of Mapalacsiao village to check if he is in the list released by the Department of Agrarian Reform (DAR)of farm-worker beneficiaries who are entitled to a share of the land. He did not find his name among the 6,212 beneficiaries recognized by the DAR.

Marquez, a resident of Bantog village, said he was interviewed by DAR officials three times. “I did not expect that I would be excluded,” he told Bulatlat.com in Filipino. He said he had been working in the vast sugarcane plantation since 1970. Like many of the beneficiaries, Marquez was born in the hacienda, his parents and his grandparents also worked in the plantation.

After almost one year since the Supreme Court’s April 24, 2012 decision, the DAR issued the final list of beneficiaries, February 27. The agency is mandated by the high court to implement the distribution of 4,916 hectares of land controlled by President Benigno Aquino III’s family for more than five decades.

“It seems there are under-the-table negotiations,” Marquez said. “What would you expect now that the President is part of theCojuangco-Aquino clan.”

Another farm worker, Rebecca Santos, 46, has the same sentiment. 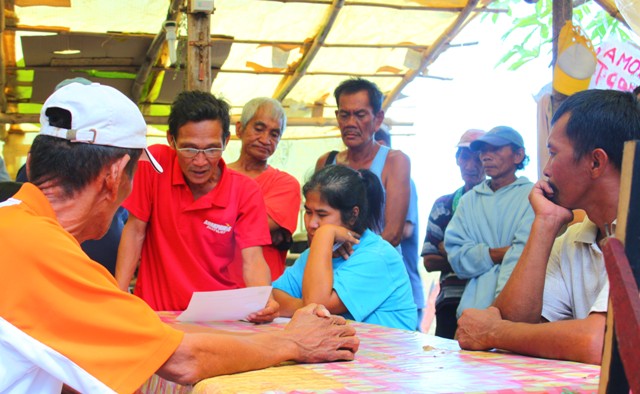 leaders and members of Alyansa ng Manggagawang Bukid sa Asyenda Luisita (Ambala) gather to discuss their next moves after the DAR released the final list of beneficiaries.(Photo by Ronalyn V. Olea / bulatlat.com)

Santos was among the 5,276 farm-worker beneficiaries who voted in a referendum for the stock distribution option (SDO) in 1989. The April 2012 SC decision revoked the SDO in Hacienda Luisita.

Lito Bais, chairman of Unyon ng Manggagawa sa Agrikultura (Uma) and one of the leaders in Hacienda Luisita, said there is “no reason to celebrate” the DAR’s release of its final list of farm-worker beneficiaries.

Bais maintained that the DAR should have referred to the signatories to the 1989 SDO instead of the list submitted by the HLI management to the high court.

Bais said the petition for exclusion of at least eight individuals filed by the Alyansang Magbubukid sa Asyenda Luisita (Ambala) has not been acted upon by DAR.

These are the persons who signed a compromise agreement with the Cojuango-Aquinos in August 2010. In a previous Bulatlat.com interview, leaders of Ambala said these people were bought off by the Hacienda Luisita Inc. (HLI) management.

Moreover, the Ambala’s petition for inclusion of 16 other farm-worker beneficiaries has also been ignored by DAR.

In a statement, Randall Echanis, Anakpawis party-list chairman and deputy secretary general of Kilusang Magbubukid ng Pilipinas (KMP) said: “It is apparent that President Aquino and the DAR are using the sham CARPer to place Cojuangco loyalists and dummies as fake beneficiaries.”

The CARPer is the Comprehensive Agrarian Reform Program Extension with Reforms.

Echanis said that under CARPer, landlords are given the power to choose the beneficiaries.

“Once again, the Cojuangco-directed DAR is fooling HaciedaLuisita farmers and the Filipino people,” Echanis said.

Agrarian Reform Secretary Virgiliodelos Reyes admitted the DAR’s list was drawn using as bases the HLI management’s list containing 6,296 names, the Memorandum of Agreement (MOA) list in 1989, as well as other documents with evidentiary value, such as, but not limited to, SSS records.

Delos Reyes said the DAR would now determine how much land the beneficiaries would get.

Bais said they would question the list all the way to the Supreme Court.

Fighting back tears, Santos said she only wants to be able to continue cultivating a small piece of land inside the hacienda.

Santos and her siblings planted palay and vegetables in two-and-a-half hectare of land.

The same is true for Marquez who joined Ambala’s cultivation program in 2005 and planted palay to one hectare of land.

He said that since they planted palay, life has been better compared to their difficult days as plantation worker. “Back then, we barely survived. We were allowed to work for only two days in a week and they [management] would deduct from our salary payments for hospitalization, supply of sugar and others.”

Bais said they are prepared for an arduous struggle.

“Under the bogus CARPer, we, farmworkers are at the losing end that’s why we are calling for the junking of this law,” Bais said.

He said there are many other issues that need to be resolved, including compensation for the Cojuangco-Aquinos.

“How could we pay for the amortization?” Bais said. He expressed worry that Chief Justice Ma. Lourdes Sereno’s position on the Luisita compensation “favors the Cojuangco-Aquinos.”

Sereno is of the opinion that the valuation of the land of Hacienda Luisita should be based on January 2. 2006.