You Are Here: Home → 2013 → April → 8 → Is there a concerted effort to crowd out the poor, remove progressives from partylist elections?

Is there a concerted effort to crowd out the poor, remove progressives from partylist elections?

“Comelec’s double standards in implementing election guidelines is apparent in the way it is pursuing the cases against Kabataan and Piston, while large-scale campaign violators such as candidates from Team P-Noy run free and unscathed.” – Kabataan Partylist

MANILA – Are the Supreme Court and the Comelec ganging up on government critics this coming election? Are they edging out further the representatives of the marginalized, favoring the traditional politics of the rich and specifically, President Aquino’s so-called Team PNoy? From statements of various peoples’ organizations, they warned that attacks against the “novelty” of allowing the poor majority a mere 20-percent representation in Congress are in the works.

Late last week, the Supreme Court penned what critics described as a “shocking turnaround.” From rejecting the likes of Abang Lingkod led by rich landlords of Negros like Rep. Albee Benitez and Board Member Patrick Lacson, the son of GSIS Chairman Bitay Lacson,the SC justices, in a decision it issued April 2 but published in its website only yesterday, April 6, junked the requirements of representation and membership of party-lists and their nominees in marginalized sectors.


The SC “Justices encroached into the power of legislators” to crowd the people“especially the marginalized masses,out of the tiny space allotted for them in Congress,” said ACT Teachers’ Party-List Representative Antonio Tinio.The ruling effectively erases the partylist system’s function as a tool for supposedly giving the poor some measure of equalizer with the rich in Congress, Tinio said. He warned that the SC decision is reinventing the system as “a free-for-all for the rich and powerful to fully exploit, without anymore bothering to feign representation of the people they oppress.”

And then, this week, some insiders from the Commission on Elections (Comelec) reportedly warned progressive partylist groups that the commission en banc will release their decision on the disqualification raps on Thursday, April 11.

Kabataan and Piston Partylists, members of the progressive Makabayan bloc, are among the partylist groups charged by COMELEC for allegedly violating sections of COMELEC Resolution No. 9615, specifically on the posting of campaign materials in public places.The charges on these partylist groups, filed in a sea of more glaring violations by other groups that are not being hounded by the Comelec, have been dubbed as a bogus attempt on the part of Comelec to look like it is doing its job.

The disqualification charges slapped on Piston Partylist and Kabataan Partylist have no legal basis, VencerCrisostomo, national chairman of progressive youth group Anakbayan, said in a statement. He explained that right from the start, Kabataan Partylist and Piston Partylist had complied with the Comelec’s notices on posting ads, even if they had found the order questionable. Despite that, Crisostomo said, the Comelec had gone ahead “persecuting and harassing the partylist groups of youth and drivers.”

Yet, the Comelec has not acted at all on the violations of other so-called party list groups and candidates allied with President Benigno “Noynoy” Aquino III, like Akbayan and Risa Hontiveros. In a press conference near Comelec main office, Gabriela Women Partylist Rep. Luz Ilagan said they have sent the Comelec numerous photo documentations of other groups’ violations. All had been ignored by the Comelec.

Instead, the Comelec, Crisostomo said, is even defending the likes of Akbayan. The youth group considers Akbayan a bogus partylist group, not really marginalized considering their leaders are holding various key positions in the Aquino government. 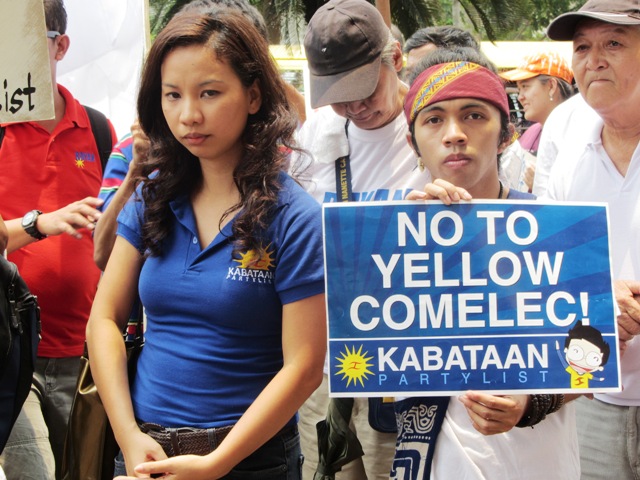 “Comelec’s double standards in implementing election guidelines is apparent in the way it is pursuing the cases against Kabataan and Piston, while large-scale campaign violators such as candidates from Team P-Noy run free and unscathed,” said Kabataan Partylist President Terry Ridon.

This Monday Apr 8, multisectoral groups led by Makabayan Coalition marched to the Comelec main office in Intramuros to slam the “continuing political harassment of progressive partylists.” Elsewhere in the country, protests at Comelec offices are also slated.

“If Comelec pushes through with the disqualification of the few remaining genuine partylists like Kabataan, the youth will lose its only representative in Congress, thereby hindering this large sector from participating in legislative processes,” said Ridon.

“For being critical of the anti-youth and anti-people policies of the Aquino administration, they are now experiencing political harassment and persecution in the hands of Aquino’s Comelec,” the youth leaders added.

With progressive youth groups, the Kabataan Partylist led campaigns against tuition hikes, budget cuts in education, Cybercrime Law and other policies deemed as anti-people by progressives.

Piston Partylist, for its part, has been recognized even by the Comelec itself for its consistent opposition to oil price hikes, and oil overpricing.

Crisostomo of Anakbayan said that, while these progressive partylist groups are being singled out for harassment, the government is furthering the domination of big politicians.