“What we want is a just and lasting peace. And the GPH’s declaration is pushing the war and not resolving the problem.” ¬– Bishop Mar Inong, United Church of Christ of the Philippines (UCCP)

MANILA — Various religious groups, from Catholic and Protestant Churches, in a press conference May 8, urged the Philippine government to overcome obstacles and resume talks with the National Democratic Front of the Philippines (NDFP).

Over the week, the Government of the Philippines (GPH) negotiating panel chairman Alexander Padilla said that both the formal talks and the special track on the GPH-NDFP peace talks have collapsed and the government is eyeing a “new approach” to peace negotiations.

“The peace negotiation is one of the vital elements on which we pin our hopes that the Philippines will come to enjoy some peace. We are outraged to hear the Philippine government declare that the talks have collapsed,” Caloocan Bishop Deogracias Iniguez Jr., convener of the Pilgrims for Peace, said in a statement.

Iniguez added: “It seems that the collapse comes from the Philippine government. As we analyze their actions, they seem to be blocking the proposals of the NDFP. We have the impression that the GPH is not listening to what the NDFP is trying to put forward. We hope they could make some space to listen and still continue with the peace negotiations.”

The GPH accused the NDFP of imposing preconditions such as the release of the detained NDFP consultants. The NDFP, for its part, maintained that such measure is not an imposition but a commitment made by the GPH during the talks in Oslo in February 2011 and an obligation of the GPH under the Joint Agreement on Safety and Immunity Guarantees (Jasig) and Comprehensive Agreement on Respect for Human Rights and International Humanitarian Law (CARHRIHL). 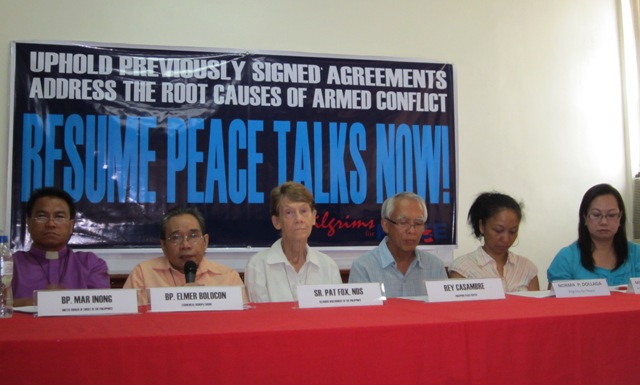 Church leaders call for the resumption of peace talks between the Government of the Philippines and the National Democratic Front during a press conference, May 8.(Photo by Ronalyn V. Olea / bulatlat.com)

“How can we trust the Philippine government to honor future agreements when it cannot abide by the previous ones?” Norma Dollaga of the Pilgrims for Peace said during the press conference.

“The government wants the other side to lay down their arms. That is the last agenda in the The Hague Joint Declaration,” Bolocon said.

According to the said agreement, the four substantive agenda are as follows: human rights and international humanitarian law; socio-economic reforms; political and constitutional reforms; and, cessation of hostilities and disposition of forces.

The GPH has been consistent in demanding for a unilateral and prolonged ceasefire in the entire duration of the talks.

In a recent statement, Presidential Adviser on the Peace Process Teresita Quintos Deles said: “Peace talks should have a clear relation to the reduction if not the cessation of hostilities that can be felt by the people right away.”

Sis. Pat Fox of the Religious Discernment of the Philippines said that ceasefire is not peace until the root causes of poverty are not addressed. Fox pointed out that the absence of genuine agrarian reform persists to this day. “Then Cory administration offered peace talks and declared Hacienda Luisita as the example of agrarian reform but until now, Hacienda Luisita farmers still have no land of their own.”

“For a government who wants a “tuwid na daan” (righteous path), it should make all efforts to address the root causes of the armed conflict,” Fox said.

Rey Casambre of the Philippine Peace Center said the NDFP is not opposed to ceasefire per se, adding that both parties occasionally implements a holiday ceasefire and other short-term ceasefires. Casambre said, however, that the NDFP would not agree to a prolonged ceasefire without immediate reforms.

Casambre said the NDFP even offered a nationwide truce. “The question is why the GPH refuses to agree to immediate, doable reforms,” he said, referring to the special track.

Presidential spokesman Edwin Lacierda said in a report that the Aquino administration will continue its counterinsurgency program Oplan Bayanihan as part of the “new approach” to peace.

“What we want is a just and lasting peace,” Bishop Mar Inong of the United Church of Christ of the Philippines (UCCP) said.

Inong said the GPH’s declaration is “pushing the war and not resolving the problem.”

“Peace achieved through war is not a lasting peace,” Inong said.

For its part, the National Council of Church in the Philippines (NCCP) shared the same sentiment. “From our perspective, a government instituted for the peace and welfare of the people, should be the last to give up on any measure intended for a just and lasting peace. The NCCP recognizes the frustrations arising from the interruptions and we hold no illusion that the process is easy. But we know that obstacles are surmountable,” Minnie Anne Calub said as she read the NCCP statement signed by general secretary Rev. Fr. Rex RB. Reyes Jr. and chairman, Supreme Bishop Ephraim S. Fajutagana of the Iglesia Filipina Independiente.

“We urge both parties to hold on to mutually agreed processes and persevere in talking and walking peace,” the NCCP, the fellowship of ten mainline Protestant Churches, said.

The NCCP said further that Padilla’s statement that nothing happened in the last 27 years in the peace talks between the GPH and NDFP “fails to take into account of the achievements of the peace negotiations.”

The NCCP added that the next agenda — a comprehensive agreement on socio-economic reforms — is the most essential of the substantive agenda agreed on by both parties in The Hague Joint Declaration.
“We hope the statement that the peace negotiations collapsed is not an indication of a refusal to address the fundamental issue that has fostered un-peace and injustice in our country for a long time,” the NCCP said.

Bishop Solito Toquero of the Pilgrims for Peace urged President Benigno Aquino III to continue with the peace negotiations. “Both parties are urged to abide by ground rules and uphold agreements to build a just and lasting peace.”