“There is a perception now that this latest incident on the Napoles saga will be followed by a ‘political witch hunt,’ with Napoles as the main weapon, against members of the opposition and other personalities not aligned with the interest of the Aquino administration.”– Bayan Muna Rep. Carlos Isagani T. Zarate

MANILA — In a country fed nightly by rags to riches stories of primetime teleseryes, where someone like Janet Napoles, bejeweled and allegedly filthy rich, sashays into mansions to order some heavy doses of misery for the sniveling top characters, this week’s twists and turns in Malacañang’s defense of the pork barrel system have immediately fueled disbelief.

Cries of “scripted!” and the “worst scripted drama of the year” rang out from critical sectors as the woman who inadvertently exposed the fertile grounds for corruption of the pork barrel system, was suddenly surfaced a few days after a mammoth Luneta rally, August 26. Before the actual surfacing, interest was drum beaten first by a P10-million ($229 thousand) reward for her capture.

“The challenge posed upon Aquino is to abolish the pork barrel in all its forms, including the presidential lump sum and discretionary funds along with the development assistance fund and lump sum funds of congressional officials and line agencies.” Gabriela Women Party Rep. Luzviminda Ilagan said in a statement before Janet Napoles surfaced. 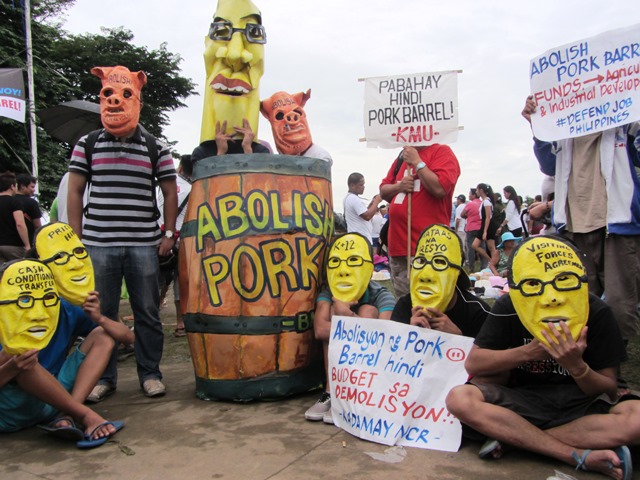 Janet Napoles has “surrendered,” or has been “surfaced” by a clique close to President Benigno “Noynoy” Aquino III himself. She may be de-glamorized in her mug shot, but critics are disgusted still at the VIP treatment she got – “surrendering” to no less than the President, who reportedly met with her before proceeding to Camp Crame ahead of Napoles to ensure her safety and security.

Palabay questioned why Napoles was brought not to the regular detention facility at the PNP Custodial Center but to the General Headquarters; why she was not handcuffed; and why she was brought to an air-conditioned “cell” with sofa, desk, and private toilet last night at the Makati City Jail, with a hundred escorts from the PNP. She was even allowed to bring with her an airbed to sleep on.

Following heated discussion about where she would be detained, authorities said Napoles was to be transferred to Fort Sto. Dominggo in Sta. Rosa, Laguna, where former President Joseph Estrada, coup plotter Gringo Honasan, and Moro leader Nur Misuari were detained. Her safety was cited as the overriding reason.

“There is a perception now that this latest incident on the Napoles saga will be followed by a ‘political witch hunt,’ with Napoles as the main weapon, against members of the opposition and other personalities not aligned with the interest of the Aquino administration,” said Bayan Muna Rep. Carlos Isagani T. Zarate in a statement.

Zarate urged the people to be more vigilant now against the possible “whitewashing” of this multi-billion scandal, “particularly, by sparing those individuals associated with the administration.”

Malacanang’s moves to save Napoles from charges, by turning her into a state witness, was also opposed by many. Bayan Muna Rep. Neri Colmenares said it is unacceptable to the Filipino people and that it “offends the very moral fiber of society.” 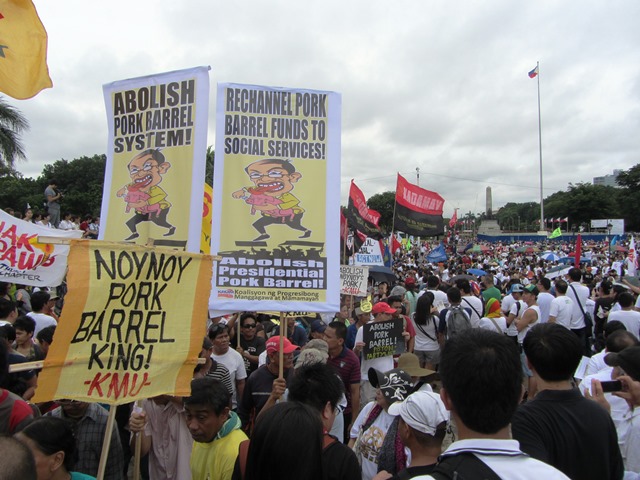 “It is an insult to the collective outrage of the people, who went out of their homes in order to call for the abolition of the so called pork barrel system and for the building of a better government. This would definitely set a bad precedent,” said Colmenares.

Senator Miriam Defensor-Santiago and Justice Sec. Leila de Lima, as well as various lawyers, were also quoted in reports opposing the moves to turn Napoles into a state witness.

The Bayan Muna lawmakers said that with Napoles now in custody, the Aquino government is expected “to immediately file the proper charges against the government officials involved, with Napoles as one of the main accused in the plunder of the billions of pesos of public funds.”

It is expected also that Napoles will tell all about the pork barrel scam, Colmenares added. “She should not only tell on the congressmen and senators, whether friends of the President or not, but also officials from the executive branch such as those from the DBM [Department of Budget and Management], COA [Commission on Audit] and agencies where the funds were downloaded. She should also return to the government the money she stole from the public funds, with interest. Otherwise, she should rot in jail completely, together with her cohorts in government,” he added.


The labor center Kilusang Mayo Uno, in a statement, called on the Filipino workers and people to remain vigilant and united and to actively oppose the Aquino administration’s “maneuvers to turn the pork barrel issue into a political circus that would divert public attention away from the real culprits.”

“We must not be swayed by Aquino’s antics aimed at undermining widespread public outrage against the pork barrel system,” said Elmer “Bong” Labog, chairman of KMU. He added that “We must not let Aquino manipulate the issue and turn investigations into the case into a political circus against his, or Mar Roxas’, rivals in the 2016 elections.”