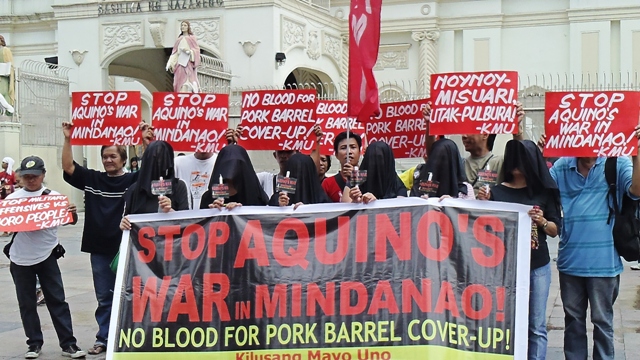 MANILA — Workers led by labor center Kilusang Mayo Uno (KMU) gathered at the Plaza Miranda in Manila this morning to light candles and condemn the government’s war in Zamboanga City. They denounced Pres. Noynoy Aquino’s “diversionary tactic” for its intent and for causing so much death and destruction.

Carrying placards that read “Stop Aquino’s war in Mindanao!” and “No blood for pork barrel cover up!” the workers emphasized that the war, now on its 10th day, has killed more than 80 people, injured almost 100, displaced more than 80,000 and burned down hundreds of houses.

“We light these candles to call for an immediate end to the war and to call for vigilance among Filipinos. This war was launched in an attempt to divert the public’s attention away from the pork barrel scandal. It is causing so much death and destruction,” said Roger Soluta, KMU secretary-general.

KMU noted that the Moro National Liberation Front had held two peace marches before but this recent one in Zamboanga City were met with violence by the Armed Forces of the Philippines because the Aquino government needs to stem public anger over the pork barrel issue. 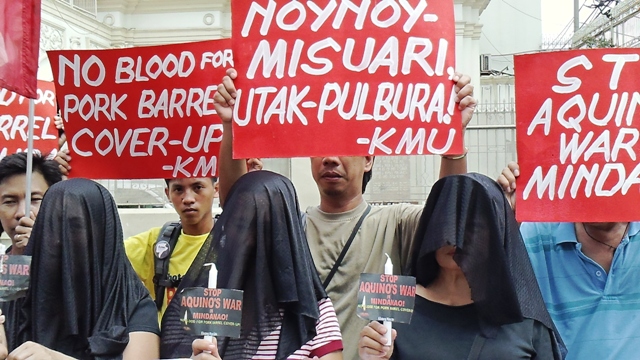 “Aquino has again shown that he does not have any concern for ordinary Filipinos and has no qualms about killing, injuring and displacing people. He did not need to employ violence against the MNLF and he could have explored peaceful means in handling the issue but clearly, he refused to,” Soluta said.

Not only is the Aquino government refusing to address the root cause of the Moro people’s armed rebellion – poverty – it is even worsening this poverty being suffered by the people of Zamboanga City and nearby towns, the KMU said in a statement.

“The biggest fault for this situation lies with the Aquino government for failing to solve the root causes of the Moro people’s armed rebellion and for sidelining the MNLF in its so-called peace efforts. Instead of addressing the root causes of rebellion, it is employing divide-and-rule tactics against the armed insurgent groups,” Soluta said.

The KMU also criticizes Nur Misuari and the leaders of the MNLF for engaging in “military adventurism” in parading in a city while bearing guns, in the face of the AFP’s superior military strength and positional advantage.