BUYING THINGS in small portions – “tingi-tingi” – is popular among Filipinos, but Department of Public Works and Highways (DPWH) Secretary Rogelio Singson is clearly not a fan of the practice. At least not when it comes to pork-barrel projects, or those that use monies from the Priority Development Assistance Fund (PDAF).

According to Singson, DPWH has had difficulty implementing PDAF projects whenever lawmakers tend to break them up into small chunks. In the past, he says, the propensity was for legislators to not finish a project in one year because they opt to spread out their funds in several locations. This has resulted, he told PCIJ in a recent interview, in substandard or partially completed projects that usually require repair and improvement later.

Under the proposed new mechanism for PDAF projects, lawmakers will be limited to a much shorter menu to avoid such “chop-chop” projects, Singson said. In addition, each legislator will be required to identify only three to five infrastructure projects that should not cost below P2 million each.

“If DPWH will be asked to implement half a bridge or half a multi-purpose building, and these projects will be of no use, we will not carry these out,” Singson also said. “These are clear. We are setting the ground rules.”

Doing projects piecemeal, however, was only one of the ways that billions of PDAF pesos went to waste during the first three years of the Aquino administration.

From July 2010 to June 2013, P60.4 billion of taxpayers’ money went to 85,534 pork-barrel projects, according to data from the Department of Budget and Management (DBM) website. A PCIJ review of these projects indicates that not only was there a surfeit of “chop-chop” ventures during the period, several towns across the nation were also favored with multiple copies of one same project, among other things.

Projects involving the purchase of “consumable” goods such as fertilizer, seeds, and even medicine, meanwhile, apparently raised too many red flags that the new pork-barrel mechanism will no longer include them. The official explanation for their exclusion, however, is that consumable goods are difficult to track.

For sure, PDAF “consumable” projects have involved more than serious money. For instance, between July 2010 and June 2013, House representatives listed more than P1.4 billion worth of projects involving “medicine” and “medical missions.” Those who spent at least P50 million of their PDAF on these were Las Piñas City Rep. Mark A. Villar, Samar Rep. Mel Senen S. Sarmiento, and Nueva Ecija Rep. Josefina L. Joson.

Last July, the Philippine Daily Inquirer reported that Lapid had provided P5 million of his PDAF in 2011 for the purchase of “anti-dengue inoculants” in Polillo, Quezon even though there was no reported case of dengue fever in the municipality that year.

Medical assistance topped Lapid’s list of priority pet projects. PCIJ’s earlier research in 2012 showed that more than P50 million of Lapid’s pork were released in November 2010 and October 2011 for the purchase of anti-dengue medicines for three municipalities in Bulacan and Zambales, two in Quezon, and one in Pangasinan and Rizal. But according to the Department of Health’s weekly updates in both years, the number of dengue cases declined considerably during these months (compared with the constant uptick from June to September), and neither were the municipalities considered hotspots.

In the 14th Congress, Lapid also assigned a P10-million financial assistance to Malabon City, which turned out be used for the “purchase of insecticides, deodorizer, disinfectant, and larvicidal solutions” for the city’s anti-dengue campaign.

The Special Allotment Release Order (SARO) for this was released in March 2010, according to DBM’s website. A local accounting staff in Malabon City told PCIJ that the Notice of Cash Allocation (NCA) for half of the amount reached the LGU on June 23, 2010, and the other half on July 12, 2010.

The staff said that the supply contract was awarded to G & G International Unlimited Inc., of which Aristotle B. Viray is the president. In the 2010 elections, a certain “Aristotle B. Viray” was a nominee of Yes We Can, Inc. party-list. Lapid’s youngest son, Maynard T. Lapid, was the party-list’s first nominee.

Sotto, meanwhile, earmarked P10 million of his PDAF for the purchase of probiotics and unspecified medicine that were to be distributed in medical missions. While known for some health benefits, probiotics are not specifically taken to help cure a serious illness. Probiotics can, in fact, be found in various types of foods such as yogurt, miso, soft cheese, and pickles, according to creditable medical sources online.

But the legislators’ version of health consciousness among legislators was apparently not confined to their use of PDAF for medical missions and the purchase of medicines. In the House of Representatives alone, 24 lawmakers allotted a total of P298 billion for organic farming projects from July 2010 to June 2013.

During these three years, Masbate Rep. Scott Davies S. Lanete used an estimate total of P75 million of his pork to finance the implementation of a livelihood project (organic farming of high value crops) for micro-entrepreneurs and small farmers in the third district of Masbate.

The Department of Agriculture (DA) implemented all the projects of Lanete, Unico, and Pangandaman. DA, as well as local government units (including barangays), the National Livelihood Development Corporation (NLDC), and the National Commission on Muslim Filipinos (NCMF) also carried out the organic farming projects of the remaining 21 lawmakers.

(NCMF – previously known, as the Office for Muslim Affairs or OMA — has long been an implementing agency of PDAF. From July 2010 to June 2013, it implemented a total of P630 million of projects identified by lawmakers. Recently, though, it found itself embroiled in the still ongoing PDAF controversy, when whistleblower Benhur Luy identified NCMF as one of the agencies that had allegedly been used to siphon off pork funds.)

More than half of this figure came from the pork of Senators Jose ‘Jinggoy’ P. Estrada (P185 million) and Ferdinand ‘Bongbong’ R. Marcos Jr. (P100 million).

Over 30 percent of the amount, meanwhile, was sourced from the PDAF of Senators Ramon ‘Bong’ B. Revilla Jr. (P65 million), Enrile (P50 million), and Sotto (P40 million).

This type of project appears to have favored certain towns in the north. For example, Umingan in Pangasinan was the recipient of seven PDAF releases coming from five senators from October 2011 to November 2012.

In one year, the first-class town benefitted from organic farming projects valued at P50 million from the pork of Senators Marcos, Revilla, Estrada, Legarda, and Sotto.

Marcos had actually identified two such projects in the area, one worth P10 million with a SARO dated October 7, 2011 and the other P5 million with December 21, 2011 SARO.

Similar cases of multiple organic-farming projects in one place can be found in the towns of Sual, Mangatarem, and Calasiao in Pangasinan; Sariaya and General Nakar in Quezon; San Antonio in Nueva Ecija; Pilar and Dinalupihan in Bataan; Javier in Leyte; and Bulacan in Bulacan.

Of the eight senators who put their PDAF in organic-farming projects, only Pangilinan and Honasan chose areas that were free of similar initiatives funded with pork money.

For some reason, Enrile, Estrada, Legarda, Marcos, Revilla, and Sotto each allocated pork barrel funds for an organic-farming project in towns where another senator had an identical PDAF venture.

Binay receives P200 million a year as his PDAF. Since becoming vice president, he has had a total of 400 Senior Citizen’s Centers constructed and/or repaired in various municipalities nationwide.

One of them was in Can-Avid, Eastern Samar that cost P500,000. The SARO for the center’s “construction/repair/rehabilitation” was issued to DPWH on May 22, 2012.

Two weeks later, on June 5, 2012, another SARO was issued to DPWH for the “construction/completion” of a P1-million Senior Citizen’s Center in Barangay 4 Poblacion, also in Can-Avid. Senator Edgardo J. Angara identified the project.

Some of the other legislators who had enrolled Senior Citizen’s Centers as their PDAF projects in the same towns where Binay had also put up the same facility include:

It’s unclear if the new pork mechanism will be able to sort out such project duplication. As early as last year, however, DPWH itself began clustering projects into groups worth a total of P5 million each so that there would be only one bidding for a number of sub-projects.

In part, Singson explained, this was because tingi-tingi or retail-type of projects entails tremendous work for DPWH as implementing agency. Projects worth P50,000 or P100,000, he said, go through the same process and documentation required for a P10-million or a P50-million project. DPWH would have to prepare individual programs of work, publish each for bidding, assign engineers, and conduct monitoring, Singson said.

“Isipin mo ’yung abala doon, ‘no (Imagine how tedious that is),” he added.

PCIJ’s review of DBM data in fact shows that more than half of road projects supported by pork from July 2010 to June 2013 cost less than P1 million each. Overall, however, the price of road projects using PDAF covers a wide range – in the 15th Congress, between P50,000 and P40 million.

The projects involved the construction, repair, rehabilitation, improvement, completion, concreting, re-blocking, asphalting, and re-gravelling of roads. But legislators did not set aside the larger portion of their PDAF for the construction of new roads. The most expensive public-works projects financed by pork involved either the repair or asphalting of roads.

In the Senate, Senator Honasan spent the most PDAF on a road project with the “rehabilitation and improvement” of a road in Quezon province (From K0092 + 377 to K0121 + 000, with exception, Famy-Real-Infanta Road). The project cost P40 million.

Honasan is followed by Senator Miriam Defensor-Santiago who assigned P30 million of her PDAF for the “concrete reblocking/asphalt overlay” of the road leading to the Rizal Provincial Sanitary Landfill in Barangays San Jose, Macabud, and San Isidro in Rodriguez, Rizal.

For sure, though, there were also projects quoted below P500,000, mainly for the concreting or repair of roads. 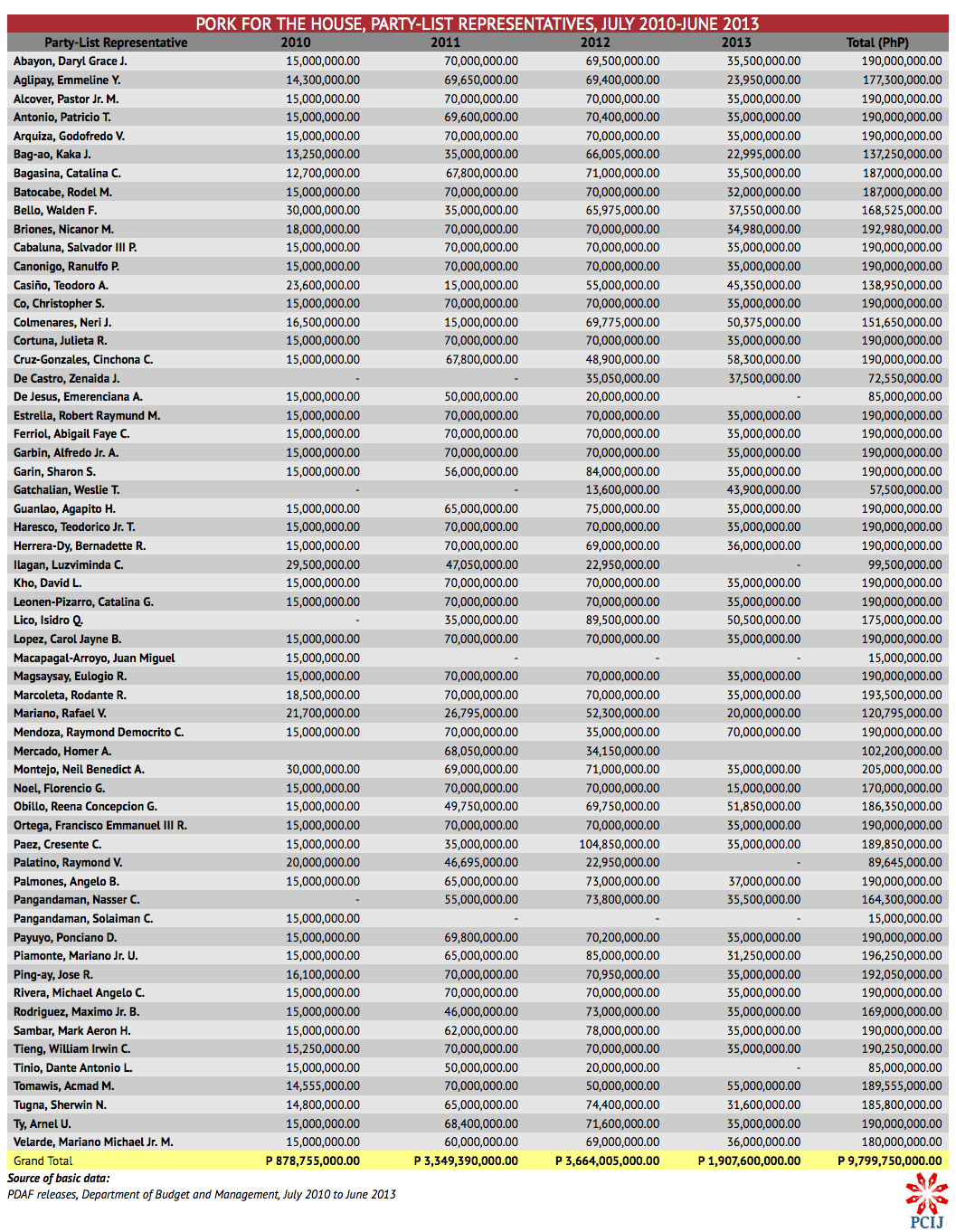 But there were also the likes of Representatives Sergio Antonio F. Apostol of Leyte, Erico B. Aumentado of Bohol, Arthur C. Yap also of Bohol, and Victor J. Yu of Zamboanga del Sur, who have funded road projects in numerous barangays that cost P50,000 each.

Some of these projects include the construction of a barangay road or a farm-to-market road.

In an interview last year, DPWH Secretary Singson told PCIJ that a farm-to-market road is a good example of a PDAF-funded project. But he said that like all government projects, it has to be up to standards.

Singson says that a kilometer of farm-to-market road that is eight inches thick and five meters wide – with one-meter shoulder on both sides – could cost between P8 million and P12 million depending on the embankment and where it is located.

Using these standards, a farm-to-market road project worth P100,000 like those identified by congressmen, would be only 10 meters long.

Senator Miriam Defensor-Santiago, meanwhile, had put P5 million of her PDAF into the construction of a five-kilometer farm-to-market road in Barangay Cuenca, Pugo, La Union.

That would mean P1 million per kilometer, or far less what Singson said would cost to construct a road that was up to DPWH standards. – With additional research by Rowena Caronan, Fernando Cabigao Jr., Charmaine Lirio, Rosemarie Corpin, and Charmaine Manay, PCIJ, October 2013