For 18 years, Carboneros’s family has been growing root crops and vegetables in less than a hectare of land. They used to plant palay too but the security guards of the Araneta clan, who claims ownership of some 300 hectares of land in Tungkong Mangga, have forbidden them.

For a week, Carboneros, a mother of five and a grandmother of six, earns P500 ($11) from selling vegetables to the market.

“We manage to get by,” Carboneros said in Filipino. “Sometimes, we eat banana or camote (sweet potato) when we do not have rice. We rarely eat meat, just vegetables.”

Carboneros said she joined the protest today to assert their right to continue tilling the small piece of land. There are impending threats to evict them from their farm with the MRT-7 project.

During the program at Chino Roces bridge, Zen Soriano of Amihan, an organization of peasant women, said women ensure that there is food on the table.

“Today is the World Food Day. Yesterday was Rural Women’s Day, but we are getting hungrier every day,” Soriano said. “We cannot even afford to buy our staple food. Rice has become so expensive.”

The United Nations declared October 16 as World Food Day, the same day that the Food and Agriculture Organization (FAO) was founded in 1945.

Citing the latest survey of the Social Weather Station (SWS), hunger incidence in the country worsened from 19.2 percent (about 3.9 million) in March to 22.7 percent (an estimated 4.9 million) in June.

According to the government’s latest poverty data, farmers and fisherfolk were poorer than the other sectors, at the rate of 37 percent and 40 percent respectively. The national poverty rate was 27 percent. Estimates by the independent think thank Ibon Foundation pegged the rural poverty rate between 75 percent and 90 percent.

Soriano blamed the massive land-use conversion and the government’s neglect of agriculture for the country’s food insecurity.

The country imports 19 percent of its rice supply.

The AMGL said the implementation of CARP and CARPer has paved the way for cancellations of certificate of land ownership awards (CLOA), certification of land transfer (CLT) and emancipation patents (EP), ejection of farmers and conversion of prime agricultural lands. Canlas cited the case of Nueva Ecija farmers who are now receiving foreclosure notices issued by the Land Bank and Department of Agrarian Reform (DAR). DAR is also ejecting farmers who cultivated idle lands such as the case of farmers from the villages of Manggang Marikit, Bagong Barrio and Yuson in Guimba town.

Canlas said that in Hacienda Luisita, the Cojuangco-Aquinos are attempting to preserve the feudal state through sugar block farming.

The AMGL said Central Luzon is also a site of massive land use conversion projects such as the Metro-Luzon Urban Beltway (MLUB), eco-zones and mining operations. MLUB includes the SCTEx, Tarlac-Pangasinan-La Union Expressway (TPLEx), Central Luzon Expressway (CLEx) and North Luzon East Expressway (NLEx East). The group said the construction of SCTEx has displaced many farmers cultivating lands near interchanges. To give way to the TPLEx construction, farmers in five barangays in Tarlac city are being displaced around the interchange of SCTEx and TPLEx. Farmers in Nueva Ecija are also being ejected by the government to pave the way for the CLEx project. In addition, eco-zones such as Subic, Clark, Bataan export-processing zones, Aurora-Pacific eco-zone (Apeco) have displaced farmers and converted agricultural lands. The latest is the planned Clark Green City located in Capas town, Tarlac, covering 35,000 hectares of land. In Zambales, mining operations have displaced many Ayta communities. These projects are being promoted by Aquino through his PPP program.

“Farmers are being displaced and productive agricultural lands are being wiped out, thus, our food supply is being jeopardized. One hectare of rice land converted clearly means 60 to 100 sacks of palay lost, or 65 sacks of rice,” Canlas said.

The fisherfolk have the same sentiments.

Salvador France of the Pambansang Lakas ng Mamamalakaya sa Pilipinas (Pamalakaya) said it is ironic that fishermen and their children suffer from malnutrition.

“We are rich in aquatic resources but foreign corporations, not the ordinary fisherfolk, benefit from these,” France said. “We even import the bagoong (shrimp paste), dilis (anchovies).”

In his speech, meanwhile, KMP national chairman and former Anakpawis Rep. Rafael Mariano said the corruption under the Aquino administration worsened the situation of the country’s agriculture. 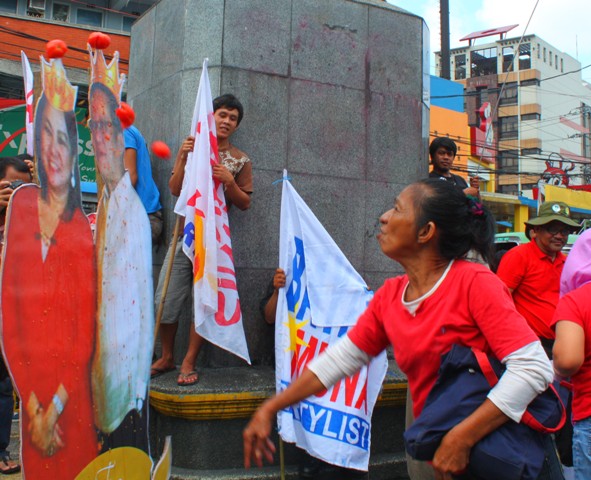 Mariano said the P10 billion ($232.5 million) plundered from the Priority Development Assistance Fund (PDAF) could have been used to subsidize 500,000 rice farmers. “If one hectare yields 80 cavans of palay, farmers can produce 1.3 metric tons of rice that can feed 11 million Filipinos for one year,” Mariano said.

Antonio Flores, KMP secretary general, said Aquino’s refusal to abolish the pork barrel system is “tantamount to the state’s abandonment of its obligation to support farmers and agricultural production.”

The KMP earlier filed plunder charges against Aquino and several DA officials for allegedly squandering funds intended for the farmers.

To end hunger, Mariano said genuine agrarian reform and national industrialization are necessary. Under Aquino, however, the KMP has no illusions.