You Are Here: Home → 2013 → November → 29 → While public’s attention is on relief efforts, Aquino approves privatization of Orthopedic Hospital

While public’s attention is on relief efforts, Aquino approves privatization of Orthopedic Hospital

“What greater blow can an insensitive government give to the suffering people than privatizing the only public orthopedic hospital where the poor run for treatment?” – Emma Manuel, Alliance of Health Workers

MANILA – Employees and health workers of the Philippine Orthopedic Center (POC) slammed the approval by President Benigno S. Aquino, who chairs the National Economic and Development Authority (NEDA) of the modernization of the said hospital.

“Pushing through with the privatization of POC at this time when the entire country is struggling to recover from a worst disaster betrays President Aquino’s callousness and insensitivity,” said Emma Manuel, President Emeritus of Alliance of Health Workers (AHW). “What greater blow can an insensitive government give to the suffering people than privatizing the only public orthopedic hospital where the poor run for treatment?” she added.

President Aquino has approved the concession agreements for seven infrastructure projects worth P184 billion ($4.202 billion) during the NEDA Board meeting last Thursday, Nov. 21. The POC, the only tertiary hospital in the country that specializes in bone diseases, is included in the seven projects.

As of last June bidding, the consortium of Megawide Construction and World Citi, Inc. is the lone bidder for the modernization of the POC.

The Megawide Construction Corp. is a publicly listed contractor and partly owned by SM tycoon Henry Sy. It also recently bagged a contract for one of the two Phase One segments of the Public-Private Partnership (PPP) School Infrastructure Projects (PSIP) and the expansion and rehabilitation of the Mactan International Airport. 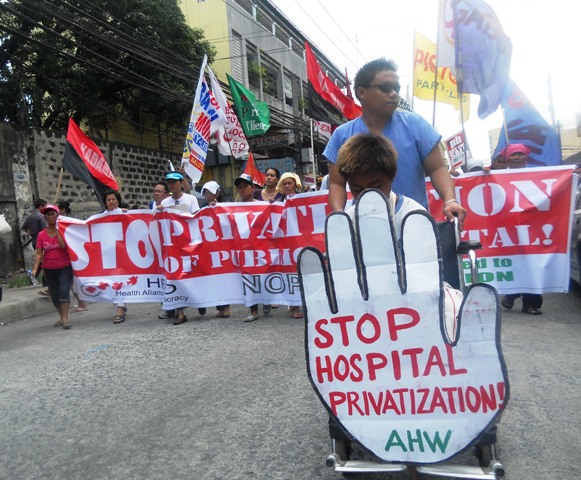 “This is an injustice to the Filipino people,” said Ricardo Antonio, Public Relations Officer of the National Orthopedic Hospital Workers’ Union – AHW (NOHWU-AHW). Employees and health workers of the POC said the approval was “done like a thief in the night.”

Antonio said while the people are busy extending help and delivering relief goods to survivors of super typhoon Yolanda, the government chooses to prioritize the projects under the Public Private Partnership (PPP). “The typhoon survivors are suffering because of the government’s slow response; the Aquino government was just busy privatizing our hospital! What kind of government would do this to its citizens?” said Antonio.

Sean Velchez, President of the NOHWU-AHW questioned the timing of the approval of the modernization project of the POC. “Why now when people from the typhoon ravaged Eastern Visayas need medical assistance?”

He said there are now about 80 patients in the POC coming from different devastated provinces. Many of these patients have severe bone injuries. Seven have spinal injuries; two are under intubation. “There are already two patients who are now under intubation because their lungs collapsed and they could not breathe on their own,” Velchez told Bulatlat.com. One diabetic patient had died due to sepsis. “The patients also exhibited post traumatic stress disorder that further aggravate their illnesses.”

Velchez said the Department of Health is not releasing augmentation funds for the survivors of the typhoon confined in specialty hospitals like the POC. 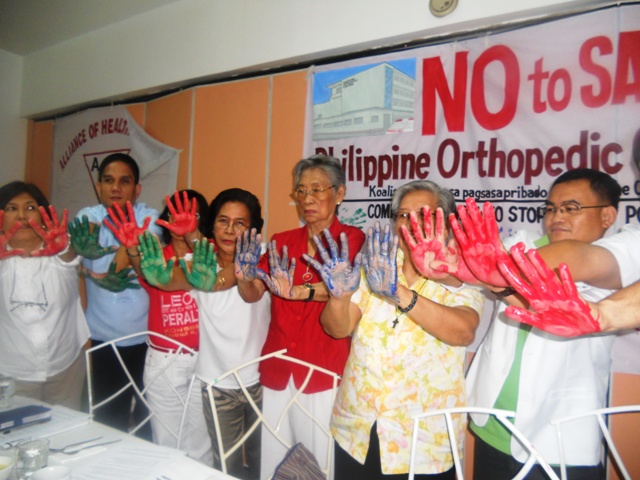 “DOH Secretary Enrique Ona should be releasing an augmentation budget for the survivors of the typhoon confined in specialty hospitals, but up to now he is not doing that,” Velchez said.

The hospital workers of the POC earlier trooped to the NEDA office in Pasig on Nov. 13 after hearing in news reports about the NEDA Board meeting. They sent an appeal letter addressed to NEDA Director General Arsenio M. Balisacan and urged the latter and the NEDA Board “to have a heart for the poor, especially during this difficult and trying time … by not allowing the approval of the ‘modernization project’ of the POC.”

The health workers opposed the POC modernization project as it will displace poor patients who are depending on the free services presently provided by POC. The new 700-bed orthopedic hospital to be built by the winning private investor-bidder inside the National Kidney and Transplant Institute compound will only provide 70 beds for indigent patients based on bid documents released by DOH.

“We demand that the government stops the privatization of our hospital. This December, we will have a black Christmas as protest against privatization of government hospitals. We will storm the offices of Megawide Corp., the PPP Center, the DOH and Malacañang,” Velchez said.