“The Apeco law, which established the freeport zone in the province, ushered a new era of land grabbing and plunder of natural resources to the detriment of the indigenous people, farmers and small fisherfolk in Casiguran, Aurora.

MANILA- Groups opposed to the controversial Aurora Pacific Economic and Free Port zone pressed members of the House of Representatives to start the debate and pass House Bill No. 257 calling for the urgent and unconditional repeal of laws that created the controversial ecozone project in the northern part of Aurora province.

In a press statement, a copy of which was sent to Bulatat.com, Pamalakaya vice chairperson Salvador France said it is high time for House Speaker Feliciano Belmonte to certify as urgent HB No. 257 or the Repeal Apeco bill authored by Anakpawis partylist Rep. Fernando Hicap and submitted on July 2013.

“Send Apeco to the grave. That is the collective sentiment of the people,” said France. 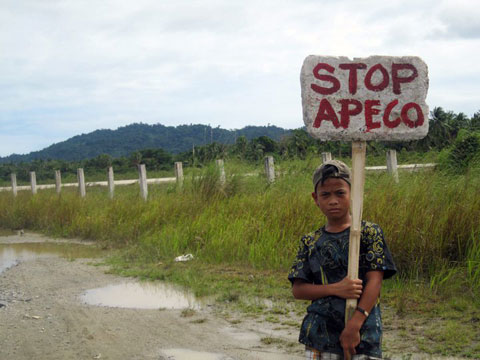 According to HB No. 257, the Apeco law, which established the freeport zone in the province, ushered a new era of land grabbing and plunder of natural resources to the detriment of the indigenous people, farmers and small fisherfolk in Casiguran, Aurora. The bill identified the government, the ruling elite and political dynasty as responsible for the, left-and-right landgrabbing and other forms of resource grab and plunder, which, it said, was done in the name of the PPP (Public-Private Partnership)–inspired ecozone project in Aurora.

Likewise HB No. 257 criticized the decision of the National Economic Development Authority (NEDA) for giving the go-signal for the ecozone project to proceed despite different issues raised against Apeco, including but not limited to loss of livelihood and environmental concerns and grave violations of the 1987 Philippine Constitution.

“Apeco can be likened to the mothballed Bataan Nuclear Plant orchestrated for the high crime of corruption during the dark years of the Marcos dictatorship. It is time to put end to this super white elephant project in Northern Aurora,” the Pamalakaya official said.

In an interview with Bulatlat.com, Rep. Hicap of Anakpawis partylist also suggested a comprehensive audit of the more than P2 billion ($45.454 million) allocated for Apeco over the last six years or since 2007.

“But pressure politics emanating from the mass movement and campaign would play a key role in sending Apeco to the grave. We ask the people of Aurora and support networks to continue the pressure work in and out of House of Representatives,” said Rep. Hicap.

The activist lawmaker also questioned the ecozone authority officials over the alleged use of P 300 million ($6.818 million) ACEF (Agricultural Competitive Enhancement Fund) for Apeco, of which P100 million ($2.272 million) was used for the construction of Aurora State College of Technology) and P 200 million ($4.545 million) for the Baler-Casiguran Road.

The activist solon maintained that it is illegal for Apeco to use ACEF money since the fund was earmarked for farmers and rural producers in Central Luzon affected by dumping of foreign agricultural products under the World Trade Organization and neo-liberal globalization. 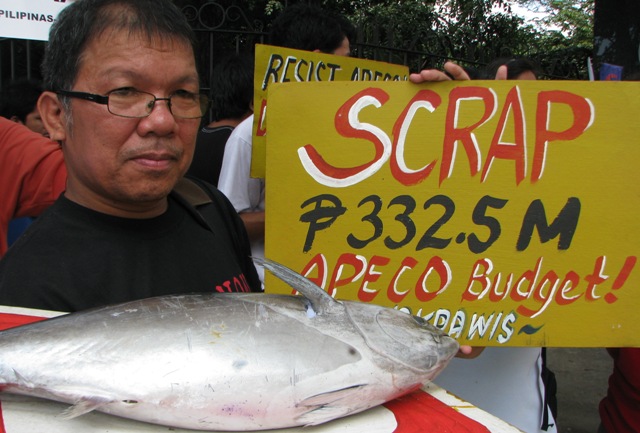 On October 2011, affected farmers, national minorities and fisherfolk asked the high tribunal to declare laws that created Apeco as un-constitutional.

“The Supreme Court should end this cycle of constitutional violations and perpetual denial of land reform rights and social justice in the little town of Casiguran,” said Pamalakaya.

Pamalakaya informed the SC that Apeco is a perpetual nightmare to thousands of indigenous people, farmers and fisherfolk in Casiguran. He said the seven years of Apeco brought difficulties and uncertainties to marginalized peoples.

“Casiguran, composed of more than 12,000 hectares of productive lands and fishing communities is being offered at the altar of global land grabbing and corporate plunder by the ruling Angara dynasty and the PPP syndicate of President Benigno Simeon Aquino III. What the “Aquino-Angara gang” will offer to tens of thousands of soon-to-be-displaced folks is only 105 hectares of land for the rural people to survive. This is extraordinary slavery,” the group said.

Pamalakaya said HB No. 257 is an independent move and should not be misconstrued as forum shopping by defenders of Apeco led by the family of Angara– the main proponent of the ecozone project. The group argued that affected farmers and rural folks in Casiguran, Aurora argued that the unbridled entry of foreign investors in APECO will result in land grabbing crimes across Casiguran. It will definitely push them away from their cultivated areas and communities.

In 2OO8, the people of Casiguran learned that Republic Act No. 9490 creating the Aurora Special Economic Zone (ASEZA) on 500 hectares of public agricultural lands covering Barangays Esteves, Dibet and Dibacong of the Municipality of Casiguran, Aurora was passed into law.

HB No. 257 further reads;” While the ASEZA law provides that it covers 500 hectares of public agricultural lands, the survey on the community shows that private lands and farm lots awarded to farmer-beneficiaries under the Comprehensive Agrarian Reform Program (CARP) of the government are among those included in ASEZA’s coverage.

More importantly, no consultation was made with the affected sectors and communities prior to the passage of Republic Act No. 9490. In fact, to show their vehement opposition to the passage of the ASEZA law that covers private lands and farmlands, resident farmers, fisherfolk and the indigenous people in the affected barangays signed petitions for their opposition to ASEZA.

Likewise, concerned local government units (LGUs) were never informed, consulted and considered before the approval of the said law. As a result, in a Resolution dated September 29, 2OO8, the Sangguniang Barangay of Dibet resolved to seek the help of the Municipal Mayor of Casiguran, Reyrraldo Bitong, to protect farming in their barangay.

Similarly, in a resolution dated December 3, 2008, the Sangguniang Barangay of Esteves resolved to ask the concerned agencies of the government to give attention to the appeal of farmers, residents and fisher folk for the distribution of the lands they are tilling before ASEZA could dispossess them of their lands. Among those in danger of being displaced are the residents of Bianoan who are working on farm lots located in Barangays Esteves and Dibet.

HB No. 257 asserted that confusion and fear spread among the farmer-beneficiaries because of inadequate, if not total absence of, information regarding the nature, scope and authority of ASEZA. As a consequence, the Sangguniang Barangay of Bianoan also passed a resolution dated November 6, 2008 in opposition to the establishment of ASEZA.