The #NoToCybercrimeLaw alliance called on all netizens and the public to turn their profile pictures on social media into black this February 25.

MANILA – Representatives of several petitioners said they would file separate motions for reconsideration on the Supreme Court (SC) ruling on the Cybercrime Prevention Act of 2012 or Republic Act 10175.

In a meeting held at the University of the Philippines (UP) College of Law, Feb. 22, members of the #NoToCybercrimeLaw alliance raised different points of objection to the high court’s decision.

Last week, the high court announced its decision upholding the constitutionality of the Cybercrime Prevention Act, except for a few provisions.

Petitioners also agreed to mark February 25, the 28th anniversary of Edsa 1 or the first People Power uprising that toppled the Marcos dictatorship, with online and offline protest actions against what they describe as e-martial law.

Petitioners maintained that despite the striking down of several controversial provisions, the Cybercrime Act remains a threat to internet freedom and to the right to free expression in general.

Luis Teodoro, deputy director of the Center for Media Freedom and Responsibility (CMFR), said libel in the Revised Penal Code (RPC) is already a big problem. “The SC decision declaring online libel as constitutional makes the problem even worse,” Teodoro said. The CMFR and other media groups have been calling for decriminalization of libel.

Section 6 of the Cybercrime Prevention Act imposes higher penalties for libel, from a minimum of six months’ imprisonment in the Revised Penal Code per count of libel to a minimum of six years.

Teodoro, also former dean of the UP College of Mass Communication, added that the law pertains to the commission of libel not only through the internet but through other devices, even cellular phones.

Inday Espina-Varona, Philippines campaign director of Change.org, deems as vague the SC statement saying that “online libel provision in the Cybercrime Law is constitutional with respect to the original author of the post and those who receive or react to the post would not be penalized.”

Varona said only a small number of social media users actually share posts without adding their own comment. “A lot of people would actually share, add their comments, add new information that they think would give greater context to the original post and in so doing, they are actually creators of original content,” Varona said during the meeting.

“Sixty-three million people are still vulnerable to cyberlibel,” Varona said. “And it is ironic because this government pays lip service to the fact that it continually asks people to expose corrupt officials … and then you’ve got cyber libel that will punish everybody for doing what the government wants them to do.”

Tonyo Cruz of the Bloggers and Netizens for Democracy (BAND) lamented that while the SC defended commercial speech, including spam, the high court is silent on the protection to political speech or the right of the public or citizens to criticize the government or government officials.

Kabataan Rep. Terry Ridon, counsel for student groups and campus journalists, underscored that Sec. 6 of the law imposes penalties one degree higher for crimes defined under the Revised Penal Code when committed with the use of information and communications technologies (ICT).

“The SC fails to realize the broad ramifications of this provision. Through Section 6, it is presumed that all crimes committed with the use of ICT would automatically be graver than if the crime were committed in the real world. The problem lies in interpreting what constitutes crimes using ICT,” Ridon said.

According to the SC decision, the provisions “do not pose any threat on the rights of the person from whom they were taken” as disclosure, search, and seizure can only be done with a court warrant.

“What the high court fails to realize is that under these sections, Internet service providers can be compelled by the government to produce all available data pertaining to any particular subscriber. This means all your private correspondence and communications can be used against you in court,” Ridon said. “This can be used as justification for service providers to track and keep records of communications and can provide cover for covert Internet snooping.”

Ridon said Section 17, which authorizes the destruction of previously preserved computer data after the expiration of the prescribed holding periods, is also problematic. 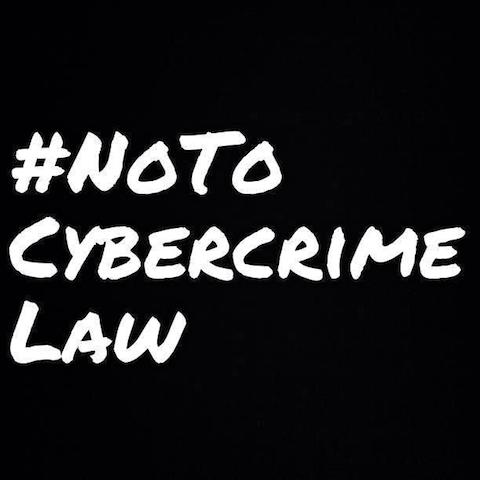 “The problem with Section 17 is that it can be interpreted also as a legal way to seize and destroy not only computer data, but the computer system wherein it is stored. Under this provision, even gadgets can be seized and destroyed, not just the data,” Ridon said.

Lawyer Marnie Tonson of the Philippine Internet Freedom Alliance (Pifa) pointed out that the law’s provisions on cybersex and pornography are inconsistent with international conventions protecting the victims.

Tonson said that while the Anti-Human Trafficking Act and the Child Pornography Act have specific provisions protecting victims of human trafficking, the Cybercrime Act penalizes even the victims with imprisonment.

The #NoToCybercrimeLaw alliance called on all netizens and the public to turn their profile pictures on social media into black this February 25.

On the same day, the alliance will hold a protest action at EDSA Shrine, site of the People Power uprising in February 1986, in the late afternoon.