‘Fight vs cybercrime law not over’ — netizens

“Libel in itself has been abused for so many years to harass and malign journalists. What’s stopping cunning individuals from exploiting the new online libel provision? I see none.” – Kabataan Partylist Rep. Terry Ridon

MANILA – Netizens expressed disappointment over the Supreme Court decision upholding the constitutionality of many provisions of Republic Act 10175 or the Cybercrime Act of 2012.

In a press briefing today, the high court announced its decision striking down portions of the law pertaining to six provisions. The SC said all the other provisions, including online libel, are constitutional.

“The high court… declared Section 4(c)(4), which penalized online libel, is not unconstitutional with respect to the original author of the post but unconstitutional only where it penalizes those who simply receive the post or react to it,” SC spokesman Theodore Te said in a press briefing.

The high court ruled Section 7 as unconstitutional, saying it violates the prohibition on double jeopardy.

Other provisions stricken off by the high court are Section 12 on collection or recording of traffic data in real-time, associated with specified communication transmitted by means of a computer system and Section 19, which authorizes the Department of Justice (DOJ) to restrict or block access to data that would be found prima facie in violation of the cybercrime law.

‘Still a threat to internet freedom’

Kabataan Partylist Rep. Terry Ridon, one of the counsels of the petitioners, said “even if the SC excised some portions of the law, it remains a threat to Internet freedom.”

“While the high court reportedly aimed to strike a balance between the protection of civil liberties and government control, we still believe that the law is potent enough to impede with our freedom of expression,” Ridon said.

In a statement, the Bloggers and Netizens for Democracy (BAND), one of the petitioners, said “the provisions wholly or partially untouched by the court, threaten and endanger the five basic principles of Internet freedom: expression, access, openness, innovation and privacy.” 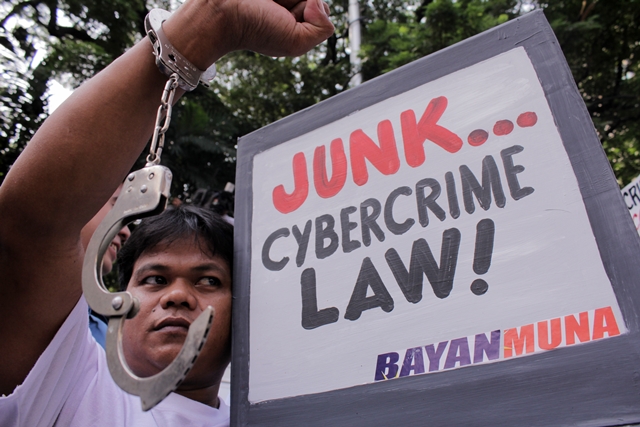 The BAND said it would file a motion for partial reconsideration before the Supreme Court.

“For while we are happy that the court partially agreed with us by voiding the provisions on warrantless real-time data spying, arbitrary taking-down of websites, and double jeopardy, our view is that the court has ‘unfinished business’ to settle in order to protect citizens’ basic right to free expression, whether offline or online,” the BAND said.

Lawyer Harry Roque of the Centerlaw said the “SC decision failing to declare libel as unconstitutional is contrary to human rights law.”

“The high court should not abdicate its duty to protect freedom of expression. No less than the U.N. Human Rights Committee has already declared that Philippine Criminal Libel Law is contrary to Freedom of Expression,” Roque said.

Roque is referring to the UN Human Rights Committee’s October 2011 decision stating that the Philippine criminal libel law is excessive and is in violation of the International Covenant on Civil and Political Rights in which the Philippines is a signatory.

Ridon said the upholding of the provision on online libel poses imminent threats to many content creators. “Libel in itself has been abused for so many years to harass and malign journalists. What’s stopping cunning individuals from exploiting the new online libel provision? I see none,” Ridon said.

“The fight against e-Martial Law is far from over. We call on everyone to up the ante and once again show our collective dissent against this repressive law,” Ridon said.

President Benigno Aquino III signed the Cybercrime Prevention Act on September 12, 2012. On Oct. 9, 2012, the SC released a 120-day temporary restraining order against the implementation of the Cybercrime Law, pending 15 petitions filed by various groups. On Feb. 5, 2013, the high court extended the TRO indefinitely.