“We cannot be complacent even if the suspension and dismissal orders were lifted and the collection of development fee was stopped. We are still watchful and we will not have second thoughts about walking out again to protest if the administration reneges on the agreement.” – Earist Institute of Student Government

MANILA – The collective action of students of the Eulolio “Amang” Rodriguez Institute of Science and technology (Earist) has finally bore fruit. Last January, the school administrator agreed to junk the collection of development fees amounting to P1,500 ($34). The suspension and dismissal orders of 21 students and student leaders who protested against the collection of the “unjust” fees were also lifted.

“This is the result of the collective action of the students with the assistance of mass organizations who helped us with our campaign,” Philip Bautista, president of the Institute of Student Government (ISG) told Bulatlat.com.

Bautista was one of the 21 students who were given a notice of dismissal when the student protests intensified.
On Nov. 26, 2013, 5,000 students walked out from their classes and protested against the collection of the development fee.

Apart from the suspension and dismissal orders issued against students opposing the collection of the development fee, Bautista and other members of the ISG experienced harassment and intimidation, surveillance among others. 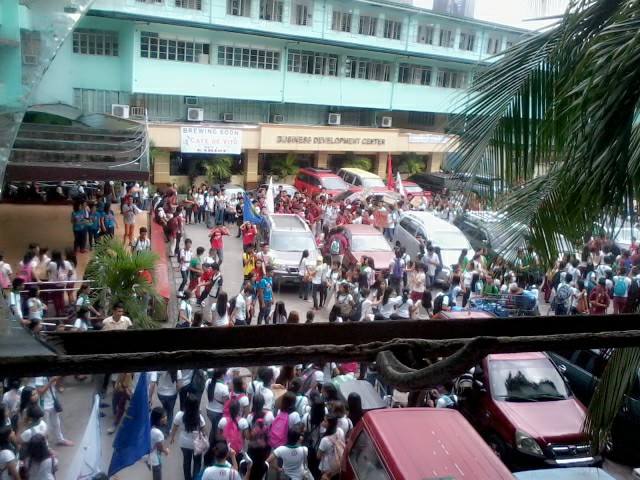 In a statement sent to Bulatlat.com, the ISG enumerated the incidents of student repression. Last Jan. 24, security guards forcibly entered the ISG office to confiscate the statements and other materials that the student leaders and volunteers were preparing for a protest action. “ISG Vice President Teddy James Angeles warned the security guards that they will be held (security guards) accountable if any of the materials will be lost or ruined. The following day, the power supply at the Katipunan ng Mag-aaral at Organisasyon (Kamao) hall that houses several student organization offices such as the ISG, EARIST Technozette (official student publication), Dulaang Ganap and Kristiyanong Kabataan para sa Bayan were cut off, which affected the operations of the said student organizations.”

Two men in civilian clothes were seen monitoring the office of the College of Business Administration Student Government (CBASG) while four others were seen doing the same at the ISG Office. “When the student leaders entered the office, all their propaganda materials such as placards, flags and streamers were missing along with salient documents such as the Board of Trustees minutes of the meeting during the Academic Year 2012-2013.”

Apart from the men in civilian clothes, the group also observed three suspicious men tactically positioned watching the people entering Kamao Hall while using their tablets to record what was happening.

Bautista said they were also being verbally lambasted by the administration. “Dr. Eriberto Astorga, Dean of the Office of Student Affairs of EARIST, even called the student leaders “demonyo” (evil) prompting ISG Vice President Teddy James Angeles to confront him.”

But students did not lose courage to fight for their rights. Last January, they escalated their campaign to the House of Representatives where they sought help from Kabataan Party-list Rep. Terry Ridon. They also filed a complaint against the school administration for student repression before the Commission on Higher Education (Ched).

On Feb. 3, after a dialogue between Earist President Dr. Eduardo S. Caillo and the ISG, they came to an agreement to stop the collection of “Development Fee/Construction of New Building and Facilities Fee starting academic year 2014 onwards.” Suspension and dismissal orders were also lifted against the 21 students. The ISG issued an official letter, which Caillo signed in agreement also dated Feb. 3.

“It was our effort to make it official,” the treasurer of the ISG said. She said the President did not issue an official memorandum stating that collection of the developmental fee would be stopped and the suspension and dismissal orders were lifted. But she said they are still vigilant. “We cannot be complacent even if the suspension and dismissal orders were lifted and the collection of development fee was stopped. We are still watchful and we will not have second thoughts about walking out again to protest if the administration reneges on the agreement,” she told Bulatlat.com.

Bautista encouraged students from other schools who are confronted with the same issues to intensify and continue their struggle. “Our experience is proof that there is no battle that we cannot win with the collective action of the students,” he told Bulatlat.com.