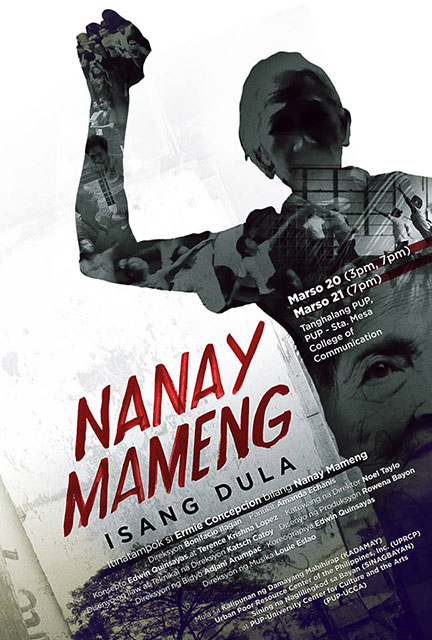 Dubbed as “Nanay Mameng, isang dula,” the one-act play featuring theater, TV and film artist Ermie Concepcion in the titular role, follows a day in the life of the 86-year old beloved woman activist as she prepares for a speech. As the story unfolds and her life is revisited, the audience will also witness the story of a community struggling to survive and fight against an oppressive system illustrated in videos, songs, dances and creative movements.

The play will be staged on March 20 (3pm,7pm) and 21(7pm) at the Polytechnic University of the Philippines’ Tanghalang PUP, PUP-Sta.Mesa College of Communication grounds. The play is being presented by urban poor groups Kalipunan ng Damayang Mahihirap (Kadamay, Urban Poor Resource Center of the Philippines, Inc. (UPRCP), community and school-based cultural group Sining na Naglilingkod sa Bayan (Sinagbayan) and the PUP- University Center for Culture and the Arts through its director, Professor Bely Ygot.

The play’s proceeds will go to “Nanay Mameng” who is undergoing medication and to services for women in urban poor communities in Metro Manila.